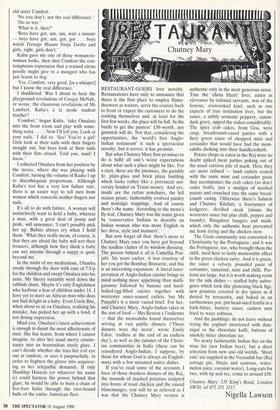 Restaurateurs have only to announce that theirs is the first place to employ flame- throwers as waiters, serve the courses back to front or expect the customers to do the cooking themselves and, at least for the first few weeks, the place will be full. In the battle to get the punters' 00-worth, any gimmick will do. Not that, considering the opportunities, the 'world's first Anglo- Indian restaurant' is such a spectacular novelty, but it serves: it has promise.

But what Chutney Mary first promises to do is fulfil all one's worst expectations about what such a place might be like. For a start, there are the premises, the garishly lit, plate-glass and brick plaza building which looks rather like a provincial uni- versity funded on Texan money. And yes, inside are the rattan armchairs, the hill station prints, fashionably evolved paisley and nostalgic trappings. And of course there's the name. According to the menu's fly-leaf, Chutney Mary was the name given by 'conservative Indians to describe an Indian woman who was more English in her dress, style and manners'.

But now forget all that: there's more to Chutney Mary once you have got beyond the soulless clutter of its window dressing.

The person behind it all is Camellia Pan- jabi. Six years earlier, it was courtesy of her you got the Bombay Brasserie, and this is an interesting expansion. A literal inter- pretation of Anglo-Indian cuisine brings to mind nothing more appetising than mulli- gatawny followed by banana and hard- boiled-egg-filled curries together with worcester sauce-soused cutlets, but Ms Punjabi's is a more varied brief. For her, and Chutney Mary, Anglo-Indian takes in the sort of food — Mrs Beaton a l'indienne — that the memsahibs found themselves serving at vast public dinners (`Those dinners were the worst', wrote Emily Eden, 'endless at the end of an endless day'), as well as the cuisines of the Christ- ian communities in India (these can be considered Anglo-Indian, I suppose, by those for whom God is always an English- man) with a few untamed native dishes.

If you've read some of the accounts I have of those drunken dinners of the Raj, the mounds of mashed potatoes sculpted into forms of roast chicken and the rancid blancmanges, you will be as relieved as I was that the Chutney Mary version is authentic only in the most generous sense. True the `chota Hazri' liver, eaten as elevenses by colonial servants, was of the ferrous, overcooked kind, such as one expects of true institution liver, but the sauce, a subtly aromatic peppery, cumin- dark gravy, upped the stakes considerably. The spicy crab cakes, from Goa, were

crisp, breadcrumb-cased patties with a fiery green sauce of chopped mint and coriander that would have had the mem- sahibs choking into their handkerchiefs.

Potato chops as eaten in the Raj were no doubt spiked_ meat patties poking out of the usual cartoon pile of mash. Here they are more refined — lamb cutlets coated with the same mint and coriander paste that accompanies the crab cakes (so don't order both), just a smidgin of mashed potato and crunched into the same bread- crumb casing. Otherwise there's Salmon and Chutney Kitchiri, a forerunner of kedgeree, devilled steak (minus the worcester sauce but plus chilli, pepper and brandy), Bangalore bangers and mash, which only the authentic heat prevented me from trying and the chicken stew.

The Goan community was converted to Christianity by the Portuguese, and it was the Portuguese, too, who brought them the chilli, used here to hotly memorable effect in the green chicken curry. And it is green, the sauce a velvety pounded paste of coriander, tamarind, mint and chilli. Por- tions are large, but it is worth making room for the side dishes — stuffed baby auber- gines which look like glistening black figs, new potatoes covered in dry spices as if dusted by terracotta, and baked in an earthenware pot, pin-head-sized lentils in a bark-bitter, buttery sauce, cashew nuts fried to waxy softness.

And the puddings: do not leave without trying the yoghurt sweetened with date- sugar or the chocolate kulfi, buttons of smokily bitter chocolate ice.

No newly fashionable Indian fizz on the wine list (nor Indian beer), but a short selection from new and old worlds. 'Short eats' are supplied in the Verandah bar (Raj cottage pie, bhajis and samosas, water- melon juice, coconut water). Long-eats for two, with tip and tea, come to around £.50.