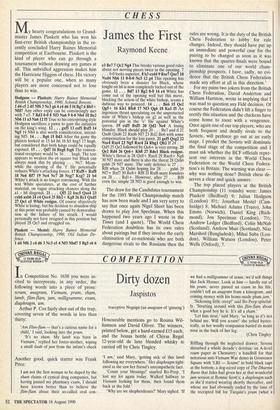 My hearty congratulations to Grand- master James Plaskett who has won his first-ever British championship in the re- cently concluded Harry Baines Memorial competition at Eastbourne. Plaskett is the kind of player who can go through a tournament without drawing any games at all. This unbridled aggression makes him the Hurricane Higgins of chess. His victory will be a popular one, when so many players are more concerned not to lose than to win.

The draw for the Candidates tournament for the 1993 World Championship match has now been made and I am very sorry to say that once again Nigel Short has been drawn to play Jon Speelman. When this happened two years ago I wrote in the

Times (and I quote), The World Chess Federation doubtless has its own rules about pairings but if they involve the early•elimination of co-nationals who are both dangerous rivals to the Russians then the rules are wrong. It is the duty of the British Chess Federation to lobby for rule changes. Indeed, they should have put up an immediate and powerful case for the pairing to be changed as soon as it was known that the quarter-finals were bound to eliminate one of our world cham- pionship prospects. I have, sadly, no evi- dence that the British Chess Federation made any effort at all in this direction.'

For my pains two jokers from the British Chess Federation, David Anderton and William Hartston, wrote in implying that I was mad to question any Fide decision. Of course the Federation didn't lift a finger to rectify this situation and the chickens have come home to roost with a vengeance. Once again one of our top players, who are both frequent and deadly rivals to the Soviets, will perforce go out at an early stage. I predict the Soviets will dominate the final stage of the competition and I must ask whether the BCF officials repre- sent our interests in the World Chess Federation or the World Chess Federa- tion's in Britain. The warning was clear — why was nothing done? British chess de- serves a clear and quick answer.