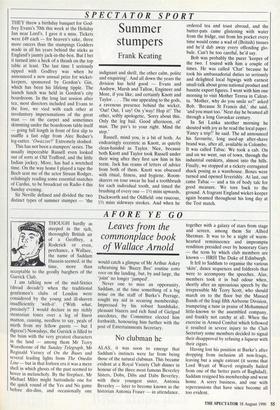 THEY threw a birthday banquet for God- frey Evans's 70th this week at the Holiday Inn near Lord's. I gave it a miss. Tickets were £49 each — for heaven's sake, three more oncers than the stumpings Godders made in all his years behind the sticks as England's jaunty jack-in-the-box. But I bet it turned into a heck of a thrash on the top table at least. The last time I seriously sipped with Godfrey was when he announced a new annual prize for wicket- keepers, sponsored by Gordon's Gin, which has been his lifelong tipple. The launch lunch was held in Gordon's city boardroom. In the long last session after tea, most directors included and Evans to the fore, we vied with each other at involuntary impersonations of the great man — on the carpet and sometimes skimming under the boardroom table itself — going full length in front of first slip to snaffle a fast edge from Alec Bedser's leg-cutter. `Owazzee?' Extremely sloshed.

This has not been a stumpers' series. The usually impeccable Russell even looked out of sorts at Old Trafford, and the little Indian jockey, More, has had a wretched time. On the way home I played a tape the Beeb sent me of the actor Struan Rodger, relishingly reading some essential snatches of Cardus, to be broadcast on Radio 4 this Sunday evening.

Sir Neville defined and divided the two distinct types of summer stumper — 'the indignant and shrill, the other calm, polite and enquiring'. And all down the years the division has held good — Evans and Andrew, Marsh and Tallon, Engineer and More, if you like; and certainly Knott and Taylor.. . . The one appealing to the gods, a ravenous presence behind the wicket, 'Out! Out, I say! On y'way! Hop it!' The other, softly apologetic, 'Sorry about this. Only the leg bail. Good afternoon, ol' man. The pay's to your right. Mind the step.'

Russell, mind you, is a bit of both. As endearingly eccentric as Knott, as quietly clean-handed as Taylor. Nice, because both Knott and Taylor took Russell under their wing after they first saw him in his teens. Jack has reams of letters of advice from both of them. Knott was obsessed with ritual, fitness, and hygiene. Room- sharers on tour swear he had a toothbrush for each individual tooth, and timed the brushing of every one — 11/2 mins upwards, Duckworth and the Oldfield: one raucous, 11/2 mins sideways strokes. And when he ordered tea and toast abroad, and the butter-pats came glistening with water from the fridge, out from his pocket every time would come a wad of (British) tissues and he'd dab away every offending glo- bule. Can't be too careful, he'd say.

Bob was probably the purer 'keeper of the two. I toured with him a couple of times. He was called 'Chat' because he took his ambassadorial duties so seriously and delighted local bigwigs with earnest small-talk about gross national product and bauxite export figures. I went with him one morning to visit Mother Teresa in Calcut- ta. 'Mother, why do you smile so?' asked Bob. 'Because St Francis did,' she said, 'and you must too.' Next day he beamed all through a long Gavaskar century.

In Sri Lanka another morning he shouted with joy as he read the local paper. 'Fancy a trip?' he said. The ad announced his favourite, long used-up after-shave brand was, after all, available in Colombo. It was called Tabac. We took a cab. On and on we went, out of town, through the industrial outskirts, almost into the hills. Finally, we stopped at a rickety corrugated shack posing as a warehouse. Boxes were turned and opened feverishly. At last, out , came Tabac — and a tin of body talc for good measure. We tore back to the ground. A fragrant England wicket-keeper again beamed throughout his long day at the Test match.