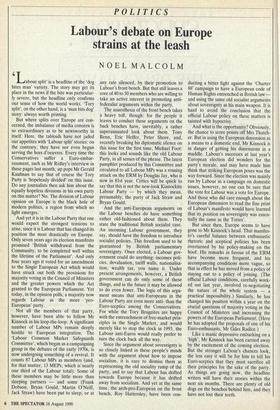 Labour's debate on Europe strains at the leash

Labour split' is a headline of the 'dog bites man' variety. The story may get its place in the news if the bite was particular- ly severe, but the headline only confirms our sense of how the world works'. 'Tory split', on the other hand, is a 'man bits dog' story: always worth printing.

But where splits over Europe are con- cerned, the imbalance of media concern is so extraordinary as to be newsworthy in itself. Here, the tabloids have not jaded our appetites with 'Labour split' stories: on the contrary, they have not even begun serving the hors d'oeuvres. Every time the Conservatives suffer a Euro-embar- rassment, such as Mr Ridley's interview in these pages last month, up pops Mr Gerald Kaufman to say that of course the Tory Party is 'hopelessly divided' on this issue. Do any journalists then ask him about the equally hopeless divisions in his own party on this matter? No. The division of Labour opinion on Europe is the black hole of modern politics, a region from which no light emerges.

And yet it is in the Labour Party that one would expect the strongest tensions to arise, since it is Labour that has changed its position the most drastically on Europe. Only seven years ago its election manifesto promised 'British withdrawal from the Community, to be ompleted well within the lifetime of the Parliament'. And only four years ago it voted for an amendment to the Single European Act which would have struck out both the provisions for majority voting in the Council of Ministers and the greater powers which the Act granted to the European Parliament. Yet today, in the opinion polls, a majority now regards Labour as the more 'pro- European' party.

Not all the members of that party, however, have been able to follow Mr Kinnock in his loop-the-loop. A significant number of Labour MPs remain deeply hostile to European integration. The 'Labour Common Market Safeguards Committee', which began as a campaigning group in the debates of the early 1970s, is now undergoing something of a revival. It counts 87 Labour MPs as members (and, for that matter, 13 MEPs, which is nearly one third of the Labour total). Some of these members may be little more than sleeping partners — and some (Frank Dobson, Bryan Gould, Martin O'Neill, Jack Straw) have been put to sleep, or at any rate silenced, by their promotion to Labour's front bench. But that still leaves a core of 40 to 50 members who are willing to , take an active interest in promoting anti- federalist arguments within the party.

The anaesthesia of the front bench takes a heavy toll, though: for the people it leaves to conduct these arguments on the back benches have, inevitably, a rather superannuated look about them. Tony Benn, Eric Heifer, Peter Shore, and, recently breaking his diplomatic silence on this issue for the first time, Michael Foot: this looks and sounds like the old Labour Party, in all senses of the phrase. The latest pamphlet produced by this Committee and circulated to all Labour MPs was a rousing attack on the ERM by Douglas Jay, who is now in 81st year. Critics will be quick to say that this is not the new-look Kinnockite Labour Party -- by which they mean, presumably, the party of Jack Straw and Bryan Gould.

And the anti-European arguments on the Labour benches do have something rather old-fashioned about them. They state the traditional British socialist case. An incoming Labour government, they say, should have the freedom to introduce socialist policies. This freedom used to be guaranteed by British parliamentary sovereignty. Once elected, a Labour gov- ernment could do anything: incomes poli- cies, devaluation, tariff walls, nationalisa- tion, wealth tax, you name it. Under present arrangements, however, a British government can do only some of these things, and in the future it may be allowed to do even fewer. The logic of this argu- ment means that anti-Europeans in the Labour Party are even more anti- than the Euro-sceptics among the Conservatives. For while the Tory Brugeites are happy with the entrenchment of free-market prin- ciples in the Single Market, and would merely like to stop the clock in 1993, the Labour anti-Euros would really prefer to turn the clock back all the way.

Since the argument about sovereignty is so closely linked in these people's minds with the argument about how to impose socialism, it is easy to dismiss them as representing the old sociality rump of the party, and to say that Labour has drifted towards Europe because it has drifted away from socialism. And yet at the same time, the arch-pro-European on the front bench, Roy Hattersley, have been con- ducting a bitter fight against the 'Charter 88' campaign to have a European code of Human Rights entrenched in British law — and using the same old socialist arguments about sovereignty as his main weapon. It is hard to avoid the conclusion that the official Labour policy on these matters is tainted with hypocrisy.

And what is the opportunity? Obviously, the chance to score points off Mrs Thatch- er. But in using the European dimension as a means to a domestic end, Mr Kinnock is in danger of getting his dimensions in a muddle. Labour's successes at last year's European election did wonders for the party's morale, and may have made him think that striking European poses was the way forward. Since the election was mainly run by Labour as a campaign on domestic issues, however, no one can be sure that the vote for Labour was a vote for Europe. And those who did care enough about the European dimension to read the fine print of Labour's manifesto would have learned that its position on sovereignty was essen- tially the same as the Tories'.

But since then, Europe seems to have gone to Mr Kinnock's head. That manifes- to's careful balance between enthusiastic rhetoric and sceptical policies has been overturned by his policy-making on the hoof. His remarks in favour of the ERM have become more frequent, and his accompanying conditions more vague, so that in effect he has moved from a policy of staying out to a policy of joining. (The official Labour conditions, carefully work- ed out last year, involved re-negotiating the nature of the whole system — a practical impossibility.) Similarly, he has changed his position within a year on the crucial questions of majority voting in the Council of Ministers and increasing the powers of the European Parliament. (Here he has adopted the proposals of one of his Euro-enthusiasts, Mr Giles Radice.) Like a manic depressive embarking on a 'high', Mr Kinnock has been carried away by the excitement of the coming election.

But the stronger Labour's chances look, the less easy it will be for him to tell his Euro-sceptics that they must sacrifice all their principles for the sake of the party. As things are going now, the headline writers will have their stories within the next six months. There are plenty of old dogs on the benches behind him, and they have not lost their teeth.