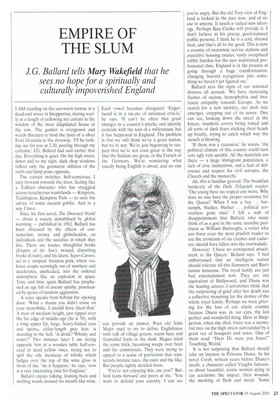 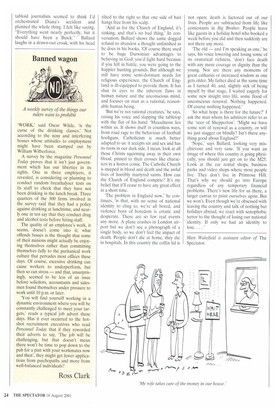 EMPIRE OF THE SLUM

sees no hope for a spiritually and culturally impoverished England

I AM standing on the sun-warm tarmac in a dead-end street in Shepperton, staring warily at a length of yellowing net curtain in the window of the most dilapidated house in the row. The garden is overgrown and weeds threaten to bind the tyres of a silver

Ford Granada to the driveway. be looking out for you at 2.30, peering through my curtains,' J.G. Ballard had said earlier that day. Everything is quiet. On the high street, down and to my right, dark shop windows reflect only the geometric stillness of the roofs and lamp posts opposite.

The curtain twitches. Self-conscious, I step forward towards the door, feeling like a Tolkien character who has struggled across treacherous wastelands — Kingston, Teddington, Kempton Park — to seek the advice of some ancient goblin. And in a way I have.

Since his first novel, The Drowned World — about a society destabilised by global warming — published in 1962, Ballard has been obsessed by the effects of consumerism, money and globalisation, on individuals and the societies in which they live. There are tender, thoughtful books (Empire of the Sun); twisted, disturbing books (Crash); and his latest, Super-Cannes, set in a 'utopian' business park, where violence erupts seemingly out of nowhere and accelerates, unchecked, into the ordered atmosphere like an explosion in space. Time and time again Ballard has prophesied an age full of uneasy apathy, punctuated by spates of random aggression.

A voice speaks from behind the opening door. 'What a shame you didn't come on your motorbike. I should have liked that.' A man of medium height, just tipped over the far edge of middle-age (he is 70), with a long upper lip, large, heavy-lidded eyes and sparse, collar-length grey hair, is standing in the hall. 'A drink? Whisky and water?' Two minutes later I am sitting opposite him at a wooden table half-covered in dead yellow vines, trying not to spill the oily meniscus of whisky which bulges over the top of the wine glass in front of me. 'As it happens,' he says, 'now is a very interesting time for England.'

Ballard enjoys talking, leaning back and swilling words around his mouth like wine. Each vowel becomes elongated: Engerlaand is in a sta-ate of nationaal crisi-is,' he says. 'It can't be often that great changes in a country's psyche and identity coincide with the turn of a millennium, but it has happened in England. The problem is that we still think we're a great nation, but we're not. We're just beginning to suspect that we're not even great in the way that the Italians are great, or the French or the Germans. We're wondering what exactly being English is about, and no one can provide an answer. Poor old John Major used to try to define Englishness with talk of village greens, warm beer and flannelled fools in the dusk. Hague tried the same trick, becoming weepy over beer and the countryside. They were trying to appeal to a sense of patriotism that transcends interest rates, the euro and the like. But people rightly derided them.

'You're not enjoying this, are you?' Ballard leans forward and peers at me. 'You want to defend your country. I can see you're angry. But the old Tory view of England is locked in the past now, and of no use to anyone. It needs a radical new ideology. Perhaps Ken Clarke will provide it. I don't believe in his plump, good-natured public persona. I think he is a cold, shrewd man, and that's all to the good. This is now a country of motorway service stations and executive housing estates, vastly overpriced rabbit hutches for the new indentured professional class. England is in the process of going through a huge transformation, changing beyond recognition into something we haven't yet figured out.'

Ballard sees the signs of our national distress all around. 'We have increasing flashes of racism, homophobia and irrational antipathy towards Europe. As we search for a new identity, our dark side emerges, creeping out of its sewer. One can see, looking down the street at the future, manhole covers being raised and all sorts of dark fears sticking their heads up briefly, trying to catch which way the stench is blowing.

If there was a recession,' he warns, 'the political climate of this country could turn very ugly very quickly. All the materials are there — a large immigrant population, a lack of civic institutions, and a lack of deference and respect for civil servants, the Church and the monarchy.'

Ah, this is familiar ground. The breakfast battle-cry of the Daily Telegraph reader: The young have no respect any more. Why does no one have the proper reverence for the Queen? When I was a boy . harrumph, blather, blather . . . political correctness gone mad.' I felt a stab of disappointment that Ballard, who many think of as a god in the same anarchic pantheon as William Burroughs, a writer who can force even the most prudish reader to see the eroticism of car crashes and cadavers, should have fallen into the marmalade.

However: I have no sentimental attachment to the Queen,' Ballard says. 'I feel embarrassed that an intelligent nation should tolerate all this flummery and Ruritanian nonsense. The royal family are just bad entertainment now. They are our equivalent of Hollywood, and Diana was the leading actress. I sometimes think that the outpouring of grief after her death was a collective mourning for the demise of the whole royal family. Perhaps we were grieving for the loss of our whole country because Diana was, in our eyes, the last perfect and wonderful thing. Here in Shepperton, when she died, there was a memorial tree on the high street surrounded by a great sea of bouquets and notes. One of them read: "Dear Di, were you Jesus?" Touching. Weird.'

It is not surprising that Ballard should take an interest in Princess Diana. In his novel Crash, written years before Diana's death, a character called Vaughn fantasises about beautiful, iconic women dying in car accidents: the impact, their wounds, the meshing of flesh and metal. 'Some

tabloid journalists seemed to think I'd orchestrated Diana's accident and planned the whole thing. I felt like saying, "Everything went nearly perfectly, but it should have been a Buick.' Ballard laughs in a drawn-out croak, with his head

tilted to the right so that one side of hair hangs free from his scalp.

'And as for the Church of England, it's sinking, and that's no bad thing.' In conversation, Ballard shows the same dogged refusal to abandon a thought unfinished as he does in his books. 'Of course there used to be huge Darwinian advantages to believing in God: you'd fight hard because if you fell in battle, you were going to the happier hunting grounds. But although we still have some semi-dormant needs for religious experience, the Church of England is ill-equipped to provide them. It has shut its eyes to the inherent flaws in human nature and the unconscious mind, and focuses on man as a rational, reasonable human being.

'But we're not rational creatures,' he says, raising his voice and slapping the tabletop with the flat of his hand. `Maaadnesss lies within us. It shows itself in countless ways, from road rage to the behaviour of football hooligans. Catholicism is much better adapted to us: it accepts sin and sex and has its roots in our dark side. I mean, look at all those Christs squirming away in their own blood, pinned to their crosses like characters in a horror comic. The Catholic Church is steeped in blood and death and the awful lives of horribly martyred saints. How can the Church of England compete? It's my belief that it'll cease to have any great effect in a short time.

'The problem in England now.' he continues, 'is that, with no sense of national identity to cling to, we're all bored, and violence born of boredom is erratic and desperate. There are so few real events any more. A plane crashes in London airport but we don't see a photograph of a single body, so we don't feel the impact of death. People don't die at home, they die in hospitals. In this country the coffin lid is not open; death is factored out of our lives. People are subtracted from life like contestants in Big Brother. People leave like guests in a holiday hotel who booked a week before you did and then suddenly are not there any more.

'The old — and I'm speaking as one,' he says, his voice lowering and losing some of its oratorical richness, 'don't face death with any more courage or dignity than the young. Nor are there any moments of great catharsis or increased wisdom as one gets older. My father died at the same time as I turned 40, and, slightly sick of being myself by that stage, I waited eagerly for some new insight into life, some flood of unconscious renewal. Nothing happened. Of course nothing happened.'

`So what hope is there for the future?' I ask the man whom his admirers refer to as the 'seer of Shepperton'. 'Might we have some sort of renewal as a country, or will we just stagger on blindly? Isn't there anything good about England?'

'Nope,' says Ballard, looking very mischievous and very sane. 'If you want an image of where this country is going physically, you should just get on to the M25. Look at the car rental shops, business parks and video shops where most people live. They don't live in Primrose Hill. That's why we should go into Europe regardless of any temporary financial problems. There's new life for us there, a larger canvas to paint ourselves upon. But we won't. Even though we're obsessed with leaving the country and talk of nothing but holidays abroad, we react with xenophobic terror to the thought of losing our national identity. If only we had an identity to lose.... '

Mary Wakefield is assistant editor of The Spectator.