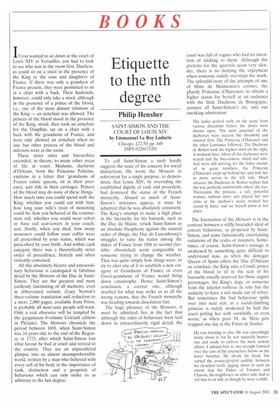 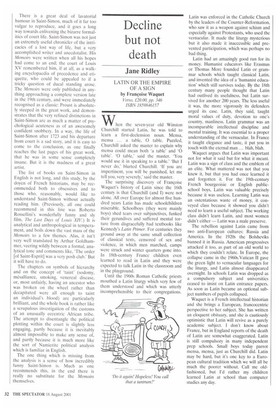 Etiquette to the nth degree

SAINT-SIMON AND THE COURT OF LOUIS XIV by Emmanuel Le Roy Ladurie Chicago, 122.50, pp. 448 ISBN 0226473201 If you wanted to sit down at the court of Louis XIV at Versailles, you had to look to see who was in the room first. Duchesses could sit on a stool in the presence of the King or the sons and daughters of France. If there was only a grandson of France present, they were permitted to sit in a chair with a back. Their husbands, however, could only take a stool, although in the presence of a prince of the blood, i.e., one of the more distant relations of the King — an armchair was allowed. The princes of the blood stood in the presence of the King, stood, then took an armchair for the Dauphin, sat on a chair with a back with the grandsons of France, and were only allowed an armchair when no one but other princes of the blood and inferiors were in the room.

These strict rules and hierarchies extended, in theory, to many other areas of life at court. Madame, duchesse d'Orleans, born the Princesse Palatine, explains in a letter that 'grandsons of France salute queens, sit in their presence, and ride in their carriages. Princes of the blood may do none of these things.' How much time you could spend with the King, whether you could eat with him, how long your wife's train of mourning could be, how you behaved at the communion rail, whether you could wear velvet or have red seat-covers in your coach, and, finally, when you died, how many mourners could follow your coffin were all prescribed by your status, which was prescribed by your birth. And within each category there was a theoretically strict order of precedence, fiercely and often violently contested.

All this absolutely bizarre and extraordinary behaviour is catalogued in fabulous detail by the Memoirs of the Due de SaintSimon. They are the greatest and most endlessly fascinating of all memoirs, even in abbreviated version. (Lucy Norton's three-volume translation and reduction to a mere 2,000 pages, available from Prion, is probably all most sane people will want. Only a real obsessive will be tempted by the gargantuan 8-volume Coirault edition in Pleiade). The Memoirs chronicle the period between 1691, when Saint-Simon was 16 years old, to the end of the Regency in 1723, after which Saint-Simon lost what favour he had at court and retired to the country. They are an unparalleled glimpse into an almost incomprehensible world, written by a man who believed with every cell of his body in the importance of rank, distinction and a propriety of behaviour which can only strike us as arbitrary to the last degree. To call Saint-Simon a snob hardly suggests the scale of his concern for social distinctions. He wrote the Memoirs in retirement for a single purpose, to demonstrate that Louis XIV, by overriding the established dignity of rank and precedent, had destroyed the status of the French monarchy. Absurd as much of SaintSimon's strictures appear, it must be admitted that he was absolutely consistent. The King's attempt to make a high place in the hierarchy for his bastards, such as the Duc du Maine, struck Saint-Simon as an absolute blasphemy against the natural order of things: the Due de Luxembourg's struggles to raise his status among the dukes of France from 18th to second (lavishlychronicled) seem comparable to someone trying to change the weather. That was quite simply how things were: to try to alter any of it to establish a new category of Grandsons of France or even Great-grandsons of France would bring down catastrophe. Hence Saint-Simon's conclusion, a correct one, although reached for what may strike us as all the wrong reasons, that the French monarchy was heading towards dissolution fast.

The huge pleasure of the Memoirs, it must be admitted, lies in the fact that although the rules of behaviour were laid down in extraordinarily rigid detail, the

court was full of rogues who had no intention of sticking to them. Although the pretexts for the quarrels seem very slender, there is no denying the enjoyment when someone rudely oversteps the mark. The splendid story of the attempts of one of Mme de Maintenon's cronies, the ghastly Princesse d'Harcourt, to obtain a higher status for herself at an audience with the little Duchesse de Bourgogne, arouses all Saint-Simon's ire, and our sneaking admiration:

The ladies arrived early on the scene from various directions before the doors were thrown open. The most punctual of the duchesses were nearest the threshold and entered first. The Princesse d'Harcourt and the other Lorraines followed. The Duchesse de Rohan took the highest stool on the right. A moment later, when all the duchesses were seated and the late-corners. titled and untitled, were still arriving, for the ladies attended in great numbers, the Princesse d'Harcourt crept up behind her and told her to move across to the left side. Much amazed, the Duchesse de Rohan replied that she was perfectly comfortable where she was. Thereupon the princess, a tall. powerful woman, without more ado placed her two arms at the duchess's waist, twisted her round by force, and sat herself down in her place.

The fascination of the Memoirs is in the contrast between a stiffly brocaded ideal of correct behaviour, as proposed by SaintSimon, and some fantastically entertaining violations of the codes of manners. Sometimes, of course, Saint-Simon's outrage is awakened by something quite difficult to understand now, as when the dowager Queen of Spain offers the Due d'Orleans an armchair. the King asks a Conde prince of the blood to sit in the seat of his barouche usually reserved for those august personages, the King's dogs, or someone from the inferior noblesse de robe has the audacity to have a suit made out of velvet. But sometimes the bad behaviour spills over into near riot, as a social-climbing princess is rudely awakened by half the court pelting her with snowballs, or even worse, as when poor M. de Metz gets trapped one day at the Palais de Justice:

He was bursting to piss. He was exceedingly funny about it; for he was naturally humorous and ready to enliven the most serious affairs. I advised him to piss straight forward over the ears of the counsellors below on the lower benches. He shook his head, but cursed the avocat-general audibly, between his clenched teeth, jigging about to such an extent that the Dukes of Tresmes and Charost, his neighbours on either side, had to tell him to sit still, as though he were a child.

There is a great deal of lavatorial humour in Saint-Simon, much of it far too vulgar to reproduce, and it goes a long way towards enlivening the bizarre formalities of court life. Saint-Simon was not just an extremely useful chronicler of the intricacies of a lost way of life, but a very accomplished writer and anecdotalist. His Memoirs were written when all his hopes had come to an end; the court of Louis XV remembered him, if at all, as a walking encyclopaedia of precedence and etiquette, who could be appealed to if a tricky question of ducal standing arose. The Memoirs were only published in anything approaching a complete version late in the 19th century, and were immediately recognised as a classic: Proust is absolutely steeped in the great work, and demonstrates that the very refined distinctions in Saint-Simon are as much a matter of psychological acuteness as of an awesomely confident snobbery. In a way, the life of Saint-Simon after 1723 and his departure from court is a sad story, and it is easy to come to the conclusion, as one finally reaches the last pages of his great work, that he was in some sense completely insane. But it is the madness of a great artist.

The list of books on Saint-Simon in English is not long, and this study, by the doyen of French historians, may be recommended both to obsessives and to those who, reasonably, would like to understand Saint-Simon without actually reading him. (Previously, all one could recommend in this line was Roberto Rossellini's wonderfully funny and sly film, The Last Days of Louis XIV.) It is analytical and anthropological in temperament, and boils down the vast mass of the Memoirs to a few themes. Alas, it isn't very well translated by Arthur Goldhammer, veering wildly between a formal, analytical tone and comments like, The order [of Saint-Esprit] was a very posh club.' But it will have to do.

The chapters on symbols of hierarchy and on the concept of 'taint' (sodomy, mesalliance, smoking, venereal disease, or, most unfairly, having an ancestor who was broken on the wheel rather than decapitated were all enough to taint an individual's blood) are particularly brilliant, and the whole book is rather like a scrupulous investigation of the customs of an unusually eccentric African tribe. The attempt to disentangle the political plotting within the court is slightly less engaging, partly because it is inevitably almost impossible to make any sense of, and partly because it is much more like the sort of Namierite political analysis which is familiar in English.

The one thing which is missing from the analysis is a sense of how incredibly funny Saint-Simon is. Much as one recommends this, in the end there is really no substitute for the Memoirs themselves.