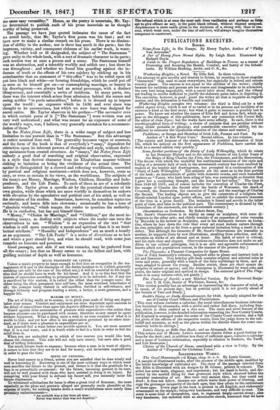 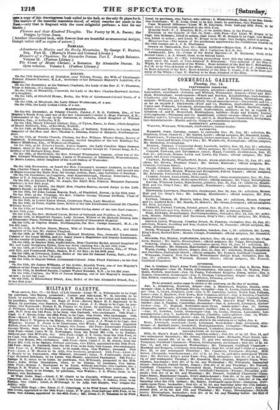 Notes from Lire; in Six Essays. By Henry Taylor, Author of a Philip Van Artevelde."

A Jar of Honey frovs Mount Hybla. By Leigh Hunt. Illustrated by Richard Doyle. A Guide to the Proper Regulation of Buildings in Towns, as a means of Promoting and Securing the Health, Comfort, and Safety of the Inhabi- tants. By William Hosking, Archt. and C. E., &c.

Wuthering Heights; a NoveL By Ellis BelL In three volumes. [An attempt to give novelty and interest to fiction, by resorting to those singular "characters' that used to exist everywhere, but especially in retired and remote country places. The success is not equal to the abilities of the writer; chiefly because the incidents and persons are too coarse and disagreeable to be attractive, the very best being improbable, with a moral taint about them, and the villany not leading to results sufficient to justify the elaborate pains taken in depicting it. The execution, however, is good: grant the writer all that is requisite as regards matter, and the delineation is forcible and truthful. Wahering Heights occupies two volumes: the third is filled out by a tale called Agnes Grey; which is not of so varied or in its persons and incidents of so extreme a kind as the first story; but what it gains in measure is possibly lost in power. We know not whether the names of Ellis Bell and ActonBell, which ap- pear on the titlepages of this publication, have any connexion with Curter Bell, the editor of Jane Eyre; but the works have some affinity. In each, there is the autobiographical form of writing; a choice of subjects that are peculiar without being either probable or pleasing; and considerable executive ability, but in, sufficient to overcome the injudicious selection of the theme and matter.] Paddiana; or Scraps and Sketches of Irish Life, Present and Past. By the Author of "A Hot Water Cure." Second edition. In two volumes.

[The variety and humour of the stories, with the truthful delineation of Irish life, which we noticed on the first appearance of Paddiana, have carried the work to a second edition very quickly.] Some further portions of the Diary of Lady Willoughby, which do relate to her Domestic History and to the stirring Events of the Latter Years of the Reign of King Charles the First, the Protectorate, and the Restoration. The favour with which the unskilful but sentimental imitation of the style and feeling of a domestic lady of rank in the seventeenth century has been received by readers of the boudoir and drawingroom, has prompted to a continuation of the "Diary of Lady Willoughby." The subjects are the same as in the first portion of the book; an intermixture of public with domestic events, and such household matters as " Fanny, who bath been ailing of late, was yesternight so feverish that I gave her a composing draught, and she keeps her bed today." The time is from 1648 till 1663; and of course includes the execution of Charles the First, the escape of Charles the Second after the battle of Worcester, the death of Cromwell, the Restoration, the execution of Vane, and the marriage of Charles the Second. The leading objects are, to give the comments of a religious but liberal-minded Loyalist upon public affairs, and to exhibit the domestic manners of the time in a pious family. The imitation is literal and servile in the latter point of view and false in the political part. The commentary is dictated by the Liberalism of the nineteenth, not the seventeenth century.] Observations on Imitation. By Robert Snow, Esq. [Mr. Snow's Observations is in reality an essay on sculpture, with some di- vergence to the other arts; and chiefly consists of an expansion of some remarks by Reynolds in his lecture on Sculpture, and in his thirteenth lecture on Imita- tion, where he lays down the rule that every art must imitate nature through its own principles, and so far from a gross material imitation being a merit it is a defect. But although the elements of Mr. Snow's Observations are traceable to another, he supports them by new illustrations, resulting from reflection, and ob- servation on works of art abroad and at home. His habit of mind is critical, and his style clear and elegant. Observations on Imitation does not make an ad- dition to our critical principles, but it is an able and agreeable enforcement of known albeit not popularized canons, in the manner of the present day.] The Playmate; a Pleasant Companion for Spare Hours. [One of Felix Summerly's volumes, designed alike to please and instruct both in art and literature. This holyday gift-book contains original and selected tales in verse and prose, generally with a touch of the fairy mythology in them, and al- ways adapted to please the young. Besides stories' there are short essays de- scriptive of nature or sports; and the letterpress is illustrated by wood-cuts and plates, the latter original and spirited in design. The external garb of The Play- mate is in many colours—rich, not gaudy.] The Psalms of David; a new Metrical Version. By the Reverend Benja- min T. H. Cole, Rector of Warbleton, Sussex, &c. • [This version possibly has an advantage in representing the character of mind, so to speak, of the present day; but in poetical spirit it is not greatly ahead of the version of Tate and Brady.] Smith's Diary, or Daily Remembrancer, for 1848. Specially adapted for the use of County Court Officers and Practitioners. [This neat volume contains a calendar, the usual miscellaneous business informa- tion furnished by alrnanacks, with a useful and rather fall diary, including Sun- day, which is often omitted as a dies non. The main and novel feature of the publication, however, is the detailed information respecting the New County Courts. All England is arranged under the order of the County Court circuits, and a fall list given of the officers of the respective courts, from the judge down to the sub- bailiff and attornies, as well as the places within the district where the court suc- cessively holds its sittings.] Lettis Diary, or Bills Due Book; and an Almanack, for 1848.

[This octavo size of Messrs. Letts'a numerous diaries forms a good-looking vo- lume for the desk ; and, in addition to a diary of sufficient space, contains a calendar and a mass of business information, especially in relation to Bankers, the Tariff, and Life Insurance.]

Claims of the Church of Rome, considered with a view to Unity. By the Author of "Proposals for Christian Union."

The Good Shunammite—ii Kings, chap. iv. v. 8. By Lewis Gruner. [A sample of illuminated books, after the manner of the middle ages, modified by the better knowledge of cultivated art. The story of the passaje selected from the Bible is illustrated with six designs by M. Gruner, printed in colours. The artist has some taste, elegance, and expression; but hand is feeble, and dis- torted by the morbid liking for that grotesque style which obtained before the complete restoration of art. Men were very earnest then, but they could not draw: it does not follow, because our artists waive their power of drawing, and copy the grotesque incapacity of the dark ages, that they attain to the enthusiasm of those ages. Every page in the book is printed in old English, and elaborately ornamented on the margin; beinavery handsome, and very difficult to read. The cover is some kind of composition, cast, to represent deeply-carved ebony; also very handsome, but endowed with an abominable stench, insomuch that we have MOM a copy of this drawingroom book exiled to the hall, as the only fit place for it. The texture of the material resembles tinznf, of which rosaries are made in the Eaot,-only that is fragrant with the most delightful perfume: a hint for our binder.

Flowers and their Kindred Thoughts. The Poetry by 31. A. Bacon; the

Designs by Owen Jones. (Another illuminated book, with flowers that are beautiful as ornamental designs, though rather stiff as copies of nature.] SERIALS.