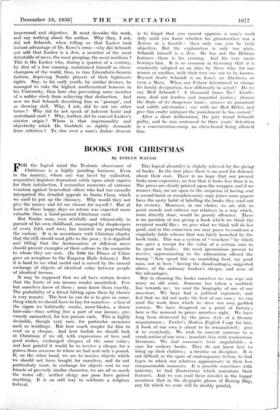 FOR the logical mind the Teutonic observance of 1.1 Christmas is a highly puzzling business. Even in the nursery, where one was beset by unlimited, acquisitive rnpulses dependent solely upon adult caprice for their intisfaction, I remember _moments of extreme vexation against benevolent elders who had too casually interpreted' the detailed appeals to Santa Claus, which we used to put up the chimney. Why would they not give the 'money and let me choose for myself ? But at . - least in those happy days no return was expected more valuable than a hand-painted Christmas card.

But NOidic man, ever wistfully and whimsically in pursuit of his own childhood, encouraged by shopkeepers of every fnith and . race, has insisted on perpetuating the custom. It is hi accordance with Christian charity that the rich should send gifts to the poor ; it is dignified and fitting that the Ambassadors of diffeient races should present examples of their culture to the monarchs to whom' they are sent. (In 1930 the Prince of Udine gave an aeroplane to the Emperor Haile Selassie.) But it is hard to see what useful end is served by the annual exchange of objects of identical value between people of identieal income.

It may be supposed that we all have certain desires that the .limits of our income render unsatisfied. Few but ourselves know of them ; none know them exactly. The probability of a friend hitting upon them by chance is very remote. The best he can do is to give us some- thing which we should have to buy for ourselves—a box of the cigars we habitually smoke, razor-blades, a dozen hair-cuts—thus setting free a part of our income, pre- viously earmarked, for less prosaic ends. This is highly desirable, though very rare, for particular occasions such as "weddings. But how much simpler for him to send us a cheque. And how foolish we should look at Christmas if we all, with expressions of love and good wishes, exchanged cheques of the same value ; and how painful it would be to 'receive a cheque for a grunea from someone to whom we had sent only a pound. If, on the *other hand, we are to receive objects which we should not have bought for ourselves, and do not particularly want, in exchange for objects sent to our friends of precisely similar character, we are all so much the worse off ; neither clergy nor poor have gained anything., It is an odd way to celebrate a religious festival. This logical absurdity is slightly relieved by the giving of books. In the first place there is no need for delicacy about their cost. There is no hope that our present looks more expensive, no fear that it looks less than it is. The prices are clearly printed upon the wrapper, and if we remove that, we are open to the suspicion of having sent a second-hand or complimentary copy (since some papers have the nasty habit of labelling the books they send out for review). Moreover, in our .choice, we are able to point morals and criticise our relatives in a way which, more directly done, would be grossly offensive. There is no question of our giving a book which we think the recipient would like ; we give what we think will do her good, and in this connexion one may pause to condemn a .singularly futile scheme that was lately launched by the book trade. This was a system of " vouchers " by which one gave a receipt for the value of a certain sum to be spent on books ; the most ignominious present to receive, approximating to the admonition offered the tramp "Now spend this on nourishing food, my good man, not in beer," having the disadvantages, suggested above, of the ordinary banker's cheque, and none of the advantages.

But in choosing the books ourselves we can wipe out many an old score. Someone has taken a snobbish line towards us ; we send the biography of one of our ancestors. We have had a political argument, and feel that we did not make the best of our case ; we can send the work from which we drew our own garbled version. We have disagreed on a point of history ; here is the moment to prove ourselves right. We have long been . distressed by. the prose style of a literary acquaintance ; Fowler's Modern English Usage for him. A book of our own is about to be remaindered ; give it to everybody. We wish to convert someone to a crank notion of our own ; inundate him with tendentious literature. We find someone's food unpalatable ; a case for cookery books. The do not know how to bring up their children; a treatise on discipline. It is not difficult in the spate of contemporary fiction, to find types to which our relatives approximate in their less companionable 'moments. It is possible sometimes with industry, to find illustrations which caricature their features. And we can send these missiles in the happy assurance that in the dyspeptic gloom of Boxing Day, any hit which we score will be doubly painful,