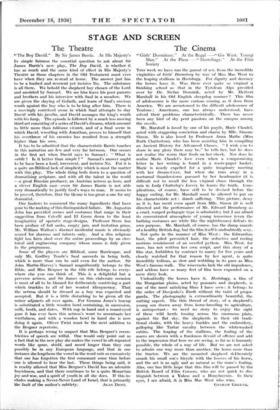 THIS week we have run the gamut of sex, from the incredible virginities of Girls' Dormitory by way of Miss Mae West to the leaping stallions in Hortobagy. For dignity and decency the horses have it. Was there ever quite so virginal a finishing school as that in the Tyrolean Alps presided over by Dr. Stefan Dominik, acted by Mr. Herbert Marshall in his Old English sheepdog manner ? This film of adolescence is the more curious coming as it does from America. We are accustomed to the difficult adolescence of Teutons ; Americans, one has always understood, have solved their problems characteristically. There has never been any hint of shy pent passions on the campus among the co-eds.

Mr. Marshall is loved by one of his pupils, Marie Claude!, acted with staggering conviction and charm by Mlle. Simone Simon. He is also loved by Professor Anna Mathe (Miss Ruth Chatterton), who has been assisting him in compiling an Ancient History for Advanced Classes. "I wish you to share in any glory there may be," he tells her, but he does not realise the worm that feeds on her cheek. Nor does he realise Marie Claudel's love even when a compromising letter in her writing is found in a waste-paper basket. Marie is nearly expelled for a quite imaginary meeting with her dream-lover, but when she runs away in a nocturnal thunderstorm pursued by her headmaster (it is difficult not to recall the less virginal chase through the rain in Lady Chutterley's Lover), he learns the truth. Com- plications, of course, have still to be devised before the happy ending, for Mr. Marshall must be allowed to put on his characteristic act : dumb suffering. This picture, dewy as it is, has merit even apart from Mlle. Simon (it is well directed and the performance of Mr. Edward Bromberg as a cruel, warped pedagogic type is admirable), but I am afraid its concentrated atmosphere of young innocence (even the bathing costumes are white like the nightdresses) defeats its own purpose. Mr. Marshall, of course, has the damp muzzle of a healthy British dog, but the film itself is undoubtedly sexy.

Not quite in the manner of Miss West : the Edwardian bust, the piled peroxided hair, the seductive and reeling motions reminiscent of an overfed python. Miss West, for once, has not written her own script, and this story of a film star, forbidden by contract to marry for five years and closely watched for that reason by her agent, is quite incredibly tedious, as slow and wobbling in its pace as Miss West's famous walk. The wisecracks lack the old impudence, and seldom have so many feet of film been expended on a mere dirty look.

Undoubtedly the horses have it. I lortobagy, a film of the Hungarian plains, acted by peasants and shepherds, is one of the most satisfying films I have seen : it belong.; to the order of Dovjenko's Earth without the taint of propa- ganda. The photography is extraordinarily beautiful, the cutting superb. The thin thread of story, of a shepherd's young son drawn away from horse-breeding to agriculture, is unimportant : we need no story to enjoy the sight of these wild herds tossing across the enormous plain, against the flat sky, the shepherds in their old tradi- tional cloaks, with the heavy buckles and the embroidery, galloping like Tartar cavalry between the whitewashed cabins. The leaping of the stallions, the foaling of the mares are shown with a frankness devoid of offence and add to the impression that here we are seeing, as far as is humanly possible, the whole of a .way of life. But we are not asked to admire one way more than another, the horse more than the tractor. We see, the mounted shepherd th liberately smash his small son's bicycle with the hooves of his horse, and the act is as ugly and as natural as the mare's foaling. Alas, one has little hope that this film will be passed by the British Board Of Film Censors, who are not quick to dis- tinguish between a Yahoo and a Houylinynm. In their eyes, I am .afraid, It is Miss Mae West who wins.