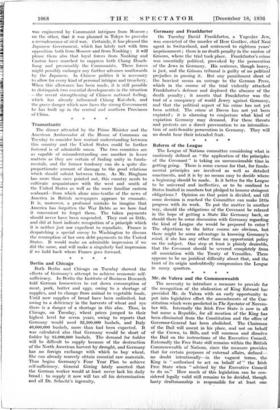 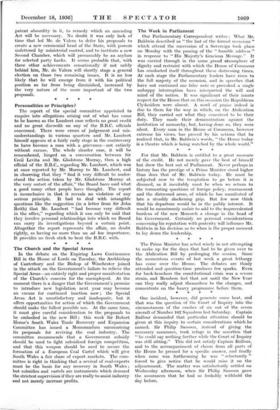 Page 2, 18 December 1936 — Mr. de Valera and the Commonwealth The necessity to introduce
Close

Mr. de Valera and the Commonwealth The necessity to introduce

a measure to provide for the recognition of the abdication of King Edward has provided Mr. de Valera with an early opportunity to put into legislative effect the amendments of the Con- stitution which were predicted in The Spectator of Novem- ber 6th. Internally the Irish Free State is now in all but name a Republic, for all mention of the King has been eliminated from the Constitution and the office of Governor-General has been abolished. The Chairman of the Dail will assent in- his place, and not on behalf of the Crown, to Bills, and will summon and dissolve the Dail on the instructions of the Executive Council. Externally the Free State still remains within the British Commonwealth of Nations, since the measure provides that for certain purposes of external affairs, defined— no doubt intentionally—in the vaguest terms, the King is "authorised to act on behalf of" the Irish Free State when "advised by the Executive Council to do so." How much of this legislation can be con- sidered legally valid still remains to be decided, though hasty draftsmanship is responsible for at least one patent absurdity in it, to remedy which an amending Act will be necessary. No doubt it was only lack of time that led Mr. de Valera to defer his proposals to create a new ceremonial head of the State, with powers Unfettered by ministerial control, and to institute a new Second Chamber, which will presumably be an asylum for selected party hacks. It seems probable that, with these other achievements sensationally if not safely behind him, Mr. de Valera will shortly stage a general election on those two remaining issues. It is no less likely that he will emerge from it with his political position so far from being diminished, increased by the very nature of the more important of the two proposals.