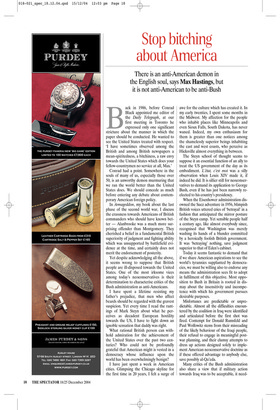 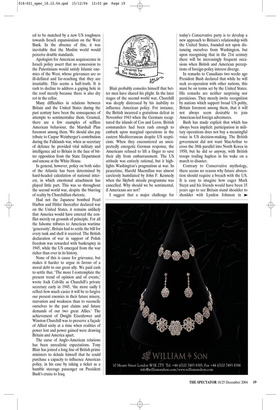 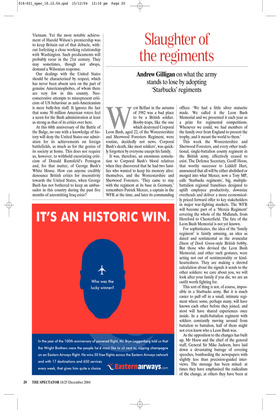 There is an anti-American demon in the English soul, says Max Hastings, but it is not anti-American to be anti-Bush Back in 1986, before Conrad Black appointed me editor of the Daily Telegraph, at our first meeting in Toronto he expressed only one significant stricture about the manner in which the paper should be conducted. He wanted to see the United States treated with respect. ‘I have sometimes observed among the British and among British newspapers a mean-spiritedness, a bitchiness, a raw envy towards the United States which does your fellow-countrymen no service at all, Max.’ Conrad had a point. Somewhere in the souls of many of us, especially those over 50, is an unworthy demon murmuring that we ran the world better than the United States does. We should concede as much before entering any debate about contemporary American foreign policy.

In Armageddon, my book about the last phase of the second world war, I discuss the crassness towards Americans of British commanders who should have known better — Alanbrooke was a much more surprising offender than Montgomery. They cherished a belief in a fundamental British superiority of judgment and fighting ability which was unsupported by battlefield evidence at the time, and certainly does not merit the endorsement of posterity.

Yet despite acknowledging all the above, it seems wrong to suppose that British people are ill-disposed towards the United States. One of the most irksome vices among today’s neoconservatives is their determination to characterise critics of the Bush administration as anti-Americans.

I have spent a lifetime resisting my father’s prejudice, that men who affect beards should be regarded with the gravest suspicion. Yet every time I read the rantings of Mark Steyn about what he perceives as decadent European hostility towards the US, I have to fight down an ignoble sensation that daddy was right.

What rational British person can withhold admiration for the achievement of the United States over the past two centuries? Who could not be profoundly grateful that American might is vested in a democracy whose influence upon the world has been overwhelmingly benign?

I have just spent a week in American cities. Glimpsing the Chicago skyline for the first time in 20 years, I felt a surge of awe for the culture which has created it. In my early twenties, I spent some months in the Midwest. My affection for the people who inhabit places like Minneapolis and even Sioux Falls, South Dakota, has never waned. Indeed, my own enthusiasm for them is greater than one notices among the shamelessly superior beings inhabiting the east and west coasts, who perceive as Hicksville almost everything in between.

The Steyn school of thought seems to suppose it an essential function of an ally to treat the US government of the day as its embodiment. L’état, c’est moi was a silly observation when Louis XIV made it, if indeed he did. It is sillier still for neoconservatives to demand its application to George Bush, even if he has just been narrowly reelected to his country’s presidency.

When the Eisenhower administration disowned the Suez adventure in 1956, blimpish British voices uttered cries of ‘betrayal’ in a fashion that anticipated the mirror posture of the Steyn camp. Yet sensible people half a century ago, like almost everybody since, recognised that Washington was merely washing its hands of a blunder committed by a heroically foolish British government. It was ‘betraying’ nothing, save judgment superior to that of Eden’s cabinet.

Today it seems fantastic to demand that if we share American aspirations to see the world’s tyrannies supplanted by democracies, we must be willing also to endorse any means the administration sees fit to adopt in fulfilment of this objective. Most opposition to Bush in Britain is rooted in dismay about the insensitivity and incompetence with which his government pursues desirable purposes.

Misfortunes are predictable or unpredictable. Almost all the difficulties encountered by the coalition in Iraq were identified and articulated before the first shot was fired. Contempt for Donald Rumsfeld and Paul Wolfowitz stems from their misreading of the likely behaviour of the Iraqi people, their refusal to engage in meaningful postwar planning, and their clumsy attempts to dress up actions designed solely to implement American neoconservative doctrine as if these offered advantage to anybody else, save possibly al-Qa’eda.

Many critics of the Bush administration also share a view that if military action towards Iraq was to be acceptable, it need ed to be matched by a new US toughness towards Israeli expansionism on the West Bank. In the absence of this, it was inevitable that the Muslim world would perceive double standards.

Apologists for American acquiescence in Israeli policy assert that no concession to the Palestinians would satisfy Islamic enemies of the West, whose grievances are so ill-defined and far-reaching that they are insatiable. This seems a half-truth. It is rash to decline to address a gaping hole in the roof merely because there is also dry rot in the cellar.

Many difficulties in relations between Britain and the United States during the past century have been the consequence of attempts to sentimentalise them. Granted, there are a few examples of selfless American behaviour, the Marshall Plan foremost among them. We should also pay tribute to Caspar Weinberger’s contribution during the Falklands war, when as secretary of defence he provided vital military and intelligence aid to Britain in the face of bitter opposition from the State Department and unease at the White House.

In general, however, policy on both sides of the Atlantic has been determined by hard-headed calculation of national interest, in which emotional attachment has played little part. This was so throughout the second world war, despite the blurring of reality by Churchillian rhetoric.

Had not the Japanese bombed Pearl Harbor and Hitler thereafter declared war on the United States, it remains unlikely that America would have entered the conflict merely on grounds of principle. For all the fulsome tributes to American wartime ‘generosity’, Britain had to settle the bill for every tank and shell it received. The British declaration of war in support of Polish freedom was rewarded with bankruptcy in 1945, while the US emerged from the war richer than ever in its history.

None of this is cause for grievance, but makes it harder to argue in favour of a moral debt to our great ally. We paid cash to settle that. ‘The more I contemplate the present trend of opinion and of events,’ wrote Jock Colville as Churchill’s private secretary early in 1945, ‘the more sadly I reflect how much easier it will be to forgive our present enemies in their future misery, starvation and weakness than to reconcile ourselves to the past claims and future demands of our two great Allies.’ The achievement of Dwight Eisenhower and Winston Churchill was to preserve a façade of Allied unity at a time when realities of power lost and power gained were drawing Britain and America apart.

The curse of Anglo-American relations has been unrealistic expectations. Tony Blair has joined a long line of British prime ministers to delude himself that he could purchase a capacity to influence American policy, in his case by taking a ticket as a humble steerage passenger on President Bush’s cruise to Iraq. Blair probably consoles himself that better men have shared his plight. In the later stages of the second world war, Churchill was deeply distressed by his inability to influence American policy. For instance, the British incurred a gratuitous defeat in November 1943 when the Germans recaptured the islands of Cos and Leros. British commanders had been rash enough to embark upon marginal operations in the eastern Mediterranean despite US scepticism. When they encountered an unexpectedly energetic German response, the Americans refused to lift a finger to save their ally from embarrassment. The US attitude was entirely rational, but it highlights Washington’s pragmatism at war. In peacetime, Harold Macmillan was almost carelessly humiliated by John F. Kennedy when the Skybolt missile programme was cancelled. Why should we be sentimental, if Americans are not?

I suggest that a major challenge for today’s Conservative party is to develop a new approach to Britain’s relationship with the United States, founded not upon distancing ourselves from Washington, but upon recognising that in the 21st century there will be increasingly frequent occasions when British and American perceptions of foreign-policy interest diverge.

In remarks to Canadians two weeks ago President Bush declared that while he will seek co-operation with other nations, this must be on terms set by the United States. His remarks are neither surprising nor pernicious. They merely invite recognition by nations which support broad US polity, Britain foremost among them, that it will not always seem desirable to join American-led foreign adventures.

Bush has made explicit that which has always been implicit: participation in military operations does not buy a meaningful voice in US decision-making. The British government did not want MacArthur to cross the 38th parallel into North Korea in 1950, but he did so anyway, with British troops trailing hapless in his wake on a march to disaster.

Contrary to Conservative mythology, there seems no reason why future abstention should require a breach with the US. It is easy to imagine how eager Mark Steyn and his friends would have been 35 years ago to see Britain stand shoulder to shoulder with Lyndon Johnson in Vietnam. Yet the most notable achievement of Harold Wilson’s premiership was to keep Britain out of that debacle, without forfeiting a close working relationship with Washington. Such predicaments will probably recur in the 21st century. They may sometimes, though not always, demand a Wilsonian response.

Our dealings with the United States should be characterised by respect, which has never been absent save on the part of genuine Americanophobes, of whom there are very few in this country. Neoconservative attempts to misrepresent criticism of US behaviour as anti-Americanism is mere bully-boy stuff. It ignores the fact that some 50 million American voters feel a scorn for the Bush administration at least as strong as that of its critics over here.

At this 60th anniversary of the Battle of the Bulge, no one with a knowledge of history will deny the United States our admiration for its achievements on foreign battlefields, as much as for the genius of its society at home. This does not require us, however, to withhold excoriating criticism of Donald Rumsfeld’s Pentagon and, for that matter, of George Bush’s White House. How can anyone credibly denounce British critics for insensitivity towards the United States, when George Bush has not bothered to keep an ambassador in this country during the past five months of unremitting Iraq crisis?