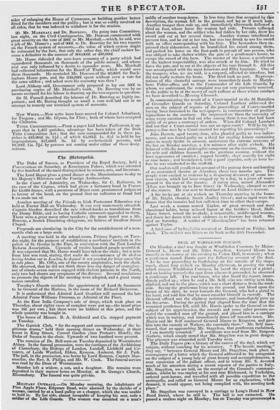 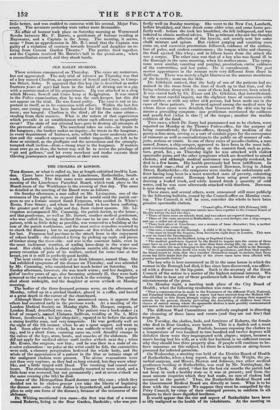 On Monday, a duel was fought at Wimbledon Common, by Major- General L. Moore and Mr. Miles Stapylton. General Moore was brought in the course of the evening to rnion Hall, in custody; wheu a gentleman named Harris gave the following account of the duel. "As he was proceeding to Godalming on the outside of the stage- coach, about four o'clock on Monday afternoon, in passing the road which crosses Wimbledon Common, he beard the report of a pistol ; and on looking towards the spot from whence it proceeded, he observed a gentleman fall. The coachman, who also heard the report, imme- diately pulled up ; when lie and a Mr. Self, who was sitting next him, alighted, and mu to the place, which was a short distance from the road- . side. Seeing the gentleman lying on the ground, and blood upon the breast of his shirt, he went towards the General, who had a pistol in his hand, and told him that he must consider himself in custody. The General offered not the slightest resistance, and immediately gave up his fire-arms. During time period that elapsed from the time that the wounded gentleman fell, until Mr. Harris spoke to the General on the subject of his apprehension, the seconds and some other persons as- sisted the wounded man off the ground, and placed him in a carriage which was in waiting, and immediately drove off towards town. - dr. Harris and Mr. Self conducted General Moore to Kingston' and gave him into the custody of Walters, the constable there." Mr. Self men- tioned, that on approaching Mr. Stapylton, that gentleman exclaimed, " I am mortally wounded." A certificate was read from Mr. Surgeon Guthrie, which simply stated that Mr. Stapylton was in great danger. The prisoner was remanded until Tuesday next. - The Daily Papers give a history of the causes of the duel, which we subjoin, without vouching for its accuracy. " The hostile meeting," they say, "between General Moore and Mr. Stapylton, took place, in consequence of a letter which the General addressed to his antagonist on the subject of a young lady of great beauty and accomplishments, a near connexion of the gallant officer, and to whom Mr. S. devoted much of his attention during a recent sojourn of the parties in Italy. Mr. Stapylton, we are told, on the receipt of the General's communi- cation, whilst he was staying at his seat near Richmond, in Yorkshire, ordered post-horses and travelled with all possible expedition to the metropolis, and called on General Moore for an explanation, which demand, it would appear, not being complied with, the meeting tnole place." Mr. Stapylton was conveyed in a carriage to Long's Hotel in New Bond Street, where he still is. The ball is not extracted. 'He passed a restless night on Monday; but on Tuesday was pronounepd a • little better, and was enabled to converse with his second, Major Fan, court. The accounts yesterday Were rather more favourable. raffair of honour took place on Saturday morning at Wormwood Scrubs between Mr. F. Banvis, a gentleman of fortune residing at Bayswater, and a Captain in the Army. The Meeting, it seems, arose "from an apprehension in Mr. B. 's mind that the Captain was guilty of a violation of courtesy towards himself and daughter on re- tiring from Covent Garden Theatre." The parties fired' together, , and the Captain received Mr. Barwis's ball in the pistol-arm ; when a reconciliation ensued, and they shook bands.