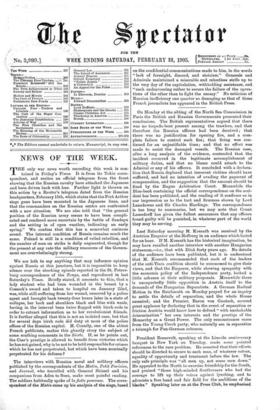 Last Saturday morning M. Kossuth was received by the Austrian

Emperor at the Hof burg in an audience which lasted for an hour. If M. Kossuth has the historical imagination, he may have recalled another interview with another Hungarian statesman,—i.e., that with Deak forty years ago. No details of the audience have been published, but it is understood that M. Kossuth recommended that each of the leaders of the anti-Tisza coalition should be summoned to give their views, and that the Emperor, while showing sympathy with the economic policy of the Independence party, looked a little askance at their military proposals. Meanwhile there is unexpectedly little opposition in Austria itself to the demands of the Hungarian Separatists. A German Radical Motion in the Reichsrath on Monday prayed for an inquiry to settle the details of separation, and the whole House assented; and the Premier, Baron von Gautsch, secured great applause by declaring that in the event of separation or friction Austria would know how to defend "with unshakable determination" her own interests and the prestige of the Monarchy as a Great Power. The only remonstrance came from the Young Czech party, who naturally see in separation a triumph for Pan-German schemes.