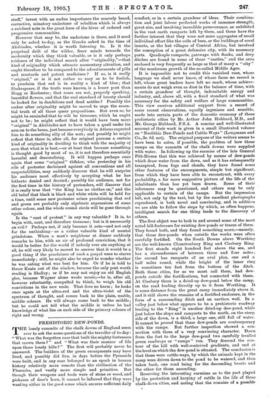 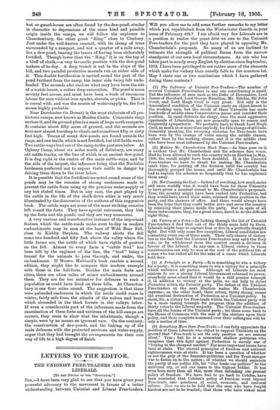 T HE lonely summits of the chalk downs of England seem

ever to ask the same questions of the traveller of to-day : "What was the forgotten race that built the mighty fortresses that crown them ? " and "What was their manner of life upon those lonely hills P" The first will probably never be answered. The builders of the green escarpments may have lived, and possibly did live, in days before the Pyramids were built, and in any case belonged to an epoch in human history relatively more remote than the civilisation of the Pharaohs, and vastly more simple and primitive. But though their weapons and tools were of stone or wood, and pickaxes of deer's born, it cannot be inferred that they were wanting either in the good sense which secures sufficient daily

comfort, or in a certain grandeur of ideas. Their combina- tion and joint labour perfected works of immense strength, great size, and involving incredible perseverance, as exhibited in the vast earth ramparts left by them, and these have the further interest that they were not mere aggregates of small individual effort like the cells of bees, or the buildings of coral insects, or the hut villages of Central Africa, but involved the conception of a great defensive city, with its necessary parts. Quadruple ramparts, gateways with flanks, and deep ditches are found in some of these "castles," and the area enclosed is very frequently as large as that of many a " city " of the mushroom growth of the so-called Middle Ages.

It is impossible not to credit this vanished race, whose language we shall never know, of whose faces no record is left, whose great leaders have left no mark, whose achieve- ments do not weigh even as dust in the balance of time, with a certain grandeur of thought, indomitable energy and industry, and, above all, with a fixed standard of what was necessary for the safety and welfare of large communities. This view receives additional support from a record of some recent observations, equally ingenious and sensible, made into certain parts of the domestic economy of these prehistoric cities by Mr. Arthur John Hubbard, M.D., and Mr. George Hubbard, F.S.A. A concise and well-illustrated account of their work is given in a small illustrated volume on "Neolithic Dew-Ponds and Cattle-Ways" (Longmans and Co., 3s. 6d. net). The original purpose of the writers seems to have been to solve, if possible, the problem of how these camps on the summits of the chalk downs were supplied with water. In following up the surmise of the late General Pitt-Rivers that this was achieved by means of dew-ponds which draw water from the dews, and as it has subsequently transpired, from fogs and clouds, they have found some other features of the encampments, simple but significant, from which they have been able to reconstruct, with every probability, a far more suggestive picture of the life of the inhabitants than has yet been drawn. Some of their inferences may be questioned, and others may be only applicable to certain of the camps. But the impression left, not only by the text, but by the excellent photographs reproduced, is both novel and convincing, and in addition we are able to follow the steps by which, as often happens, intelligent search for one thing leads to the discovery of others.

The first object was to look in and around some of the most noted hill-fortresses for existing dew-ponds or traces of them. They found both, and they found something more,—namely, that these dew-ponds when outside the works were often carefully fortified. On the South Downs above Worthing are the well-known Chanctonbury Ring and Cissbury Ring. The first stands eight hundred feet above the sea, and has a circumference of between three and four miles ; the second has ramparts of an oval plan, one and a half miles round, while the height of the inner ring is sometimes ten feet from the bottom of the ditch. Both these cities, for so we must call them, had dew- ponds outside the fortifications, but connected with them. At Cissbury there is a dried-up dew-pond below the camp, on the road leading directly up to it from Worthing. It is some distance from the great camp immediately above it, and it still shows the remains of a fortified enclosure, in the form of a surrounding ditch and an earthen wall. In a valley just below what appears to be a prehistoric roadway leading to the "Ring" is another dried-up dew-pond, while just below the slope and ramparts to the north, on the steep side of the down, is a third, a large one, still full of water. It cannot be proved that these dew-ponds are contemporary with the camps. But further inspection showed a con- nection with them of a very convincing character. Down from the fort to the large dew-pond two carefully levelled green roadways or " ramps " run. They descend the con- tour of the hill with well-contrived gradients, and end at the level on which the dew-pond is situated. The conclusion is that these were cattle-ways, by which the animals kept in the camp were driven down to the pond to be watered, and then taken back, one road being for the descending beasts and the other for those ascending.

Reserving the interesting surmises as to the part played by the protection and keeping of cattle in the life of these chalk-down cities, and noting that the remains of a possible

origin inside the camps, we will follow the explorers to Chanctonbury, the other great "Ring" close to Cissbury. Just under the well-known summit, with its clump of trees surrounded by a rampart, and not a quarter of a mile away, lies a dew-pond, bearing the traces of having been elaborately fortified. Though lower than the "Ring," it is on the top of a bluff of chalk,—a very favourite position with the dew-pond makers of to-day. A deep trench is cut in the slope of the hill, and two parallel protective mounds run on either side of it. This double fortification is carried round the part of the pond furthest from the camp, the inner side being left unde- fended. The mounds also enclose what may have been the site of a watch-house, a rather deep excavation. The pond is some seventy feet across, and must have been a work of enormous labour for men without iron spades, shovels, or picks. That it is coeval with, and was the source of water-supply to, the fort seems highly probable.

Near Dorchester (in Dorset) is the most elaborate of all pre- historic camps, now known as Maiden Castle. Concentric rings enclose it, and its ground-plan is a maze of huge earth ramparts. It contains about fifty acres of ground, and the mounds are even now almost too steep to climb, and sometimes fifty or sixty feet high. Traces of many dew-ponds are found outside the rings, and one inside, which is not fortified, but still holds water. Two cattle-ways lead out of the camp to the pastures below. At Ogbury Camp, about six miles north of Salisbury, are many old cattle-tracks, on the line of which is an ancient dew-pond. It is dug right in the centre of the main cattle-ways, and by the side of the largest, the inference being that the Neolithic herdsmen preferred not to expose their cattle to danger by driving them down to the river below.

It is possible that the fortifications noted round some of the ponds may be the remains of strong enclosures made to prevent the cattle from using up the precious water-supply at any but stated times. But in any case, the part played by the cattle in the life of the chalk-down cities is very much illuminated by the discoveries of the authors of this suggestive book. The cattle-ways are some of the most striking remains left round the forts. They have special entrances, they link up the forts and the ponds, and they are very numerous.

A very curious and corroborative instance of the important feature which the cattle-roads make even to-day in modern embankments may be seen at the base of Wild Boar Fell, close to Kirkby Stephen. The railway skirts the fell some two hundred and fifty feet above the valley where the little farms are, the cattle of which have rights of pasture on the fell. Almost to every farm a "cattle trod" has been left by the engineer of the line, the "trod" being a tunnel for the animals to pass through, and under, the embankment. If Messrs. Hubbard's book reaches a, second edition, they might like to compare this modern example with those in the hill-forts. Besides the main forts and cities, there are often miles of minor embankments around them. They are far too extensive for defences to such a population as could have lived on these hills. At Chancton- bury is one four miles round. The suggestion is that these were palisaded enclosures in which the herds could roam in winter, fairly safe from the attacks of the wolves and bears which abounded in the thick forests in the valleys below. If even a considerable part of the inferences made from the examination of these forts and environs of the hill-camps are correct, they seem to show that the inhabitants, though a simple, were by no means an ignorant race. On the contrary, the construction of dew-ponds, and the linking up of the main defences with the protected environs and water-supply, argue that they had brought the arrangements for their own way of life to a high degree of finish.