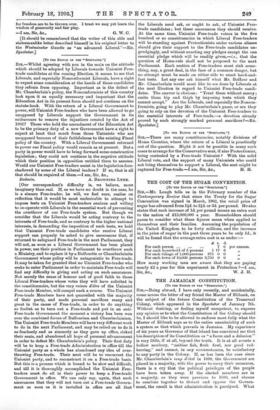 trade candidates at the coming Election, it seems to me

that Liberals, and especially Nonconformist Liberals, have a right to expect some consideration at the hands of those candidates they refrain from opposing. Important as is the defeat of Mr. Chamberlain's policy, the Nonconformists of this country look upon it as equally necessary and important that the Education Act in its present form should not continue on the statute-book. With the return of a Liberal Government to power, will Unionist Free-traders who have been allowed to go unopposed by Liberals support the Government in its endeavours to remove the injustices created by the Act of 1902? Those who hold the amendment of the Education Act to be the primary duty of a new Government have a right to expect at least that much from those Unionists who are unopposed because of their faithfulness to the existing Fiscal policy of the country. With a Liberal Government returned to power our Fiscal policy would remain as at present. But a party in power would.have to bring forward some constructive legislation ; they could not continue in the negative attitude which their position in opposition entitled them to assume. Would our Unionist Free-traders assist in the legislation fore- shadowed by some of the Liberal leaders ? If so, that is all that should be required of them.—I am, Sir, &c.,

is a sincere Free-trader, he will, we feel sure, realise on reflection that it would be most undesirable to attempt to impose tests on Unionist Free-traders anxious and willing to co-operate with Liberals in the essential work of preventing the overthrow of our Free-trade system. But though we consider that the Liberals would be acting contrary to the interests of Free-trade, and so contrary to the higher national interests, in demanding the imposition of such tests, we hold that Unionist Free-trade candidates who receive Liberal support can properly be asked to give assurances that, if returned to safeguard Free-trade in the next Parliament, they will not, as soon as a Liberal Government has been placed in power, use their position in Parliament to overthrow such a Ministry, and to replace it by a Balfourite or Chamberlainite Government whose policy will be antagonistic to Free-trade.

It may be taken for granted that no Unionist Free-trader who seeks to enter Parliament in order to maintain Free. trade will find any difficulty in giving and acting on such assurances.

Liberal Free-traders whose votes they will have solicited in the constituencies, but the very raison d'être of the Unionist

Free-trade Member, will compel such a course. The Unionist Free-trade Members have not quarrelled with the majority of their party, and made personal sacrifices many and great in the cause of Free-trade, in order to do anything so foolish as to turn out a Free-trade and put in an anti- Free-trade Government the moment 'a victory has been won over the combined forces of Balfourism and Cham berla.inism.

The Unionist Free-trade Members will have very different work to do in the next Parliament, and may be relied on to do it as fearlessly and as sincerely as they gave up office, risked their seats, and abandoned all hope of personal advancement in order to defeat Mr. Chamberlain's policy. Their first duty will be to keep a Free-trade Administration in office till the Unionist party as a whole has abandoned any idea of over- throwing Free-trade.. Their next will be to reconvert the Unionist party, and to reconstruct it on a Free-trade basis.

But this is a process which is bound to be slow and difficult, and till it is thoroughly accomplished the Unionist Free-

the Liberals need ask, or ought to ask, of Unionist Free- trade candidates ; but these assurances they should receive. At the same time, Unionist Free-trade voters in the five hundred or so constituencies in which Liberal Free-traders will be standing against Protectionists under various aliases should give their support to the Free-trade candidates un- grudgingly, and without exacting any pledges except the one essential pledge which will be readily given,—i.e., that the question of Home-rule shall not be proposed to the next Parliament. Each section of Free-traders must sink some- thing, nay, a great deal, in the face of a common danger, but no attempt must be made on either side to exact hard-and- fast testa. Let any one ask himself what Mr. Balfour and Mr. Chamberlain would most like to see done by Liberals at the next Election in regard to Unionist Free-trade candi- dates. The answer is obvious : "Treat them without mercy; smite them hip and thigh by imposing tests which they cannot accept." Are the Liberals, and especially the Noncon- formists, going to play Mr. Chamberlain's game, or are, they going to rely on the devotion of the Unionist Free-traders to the essential interests of Free-trade,—a devotion already proved by such strongly marked personal sacrifices F—En. Spectator.] [To THE EDITOR or THE "SPECTATOR."'