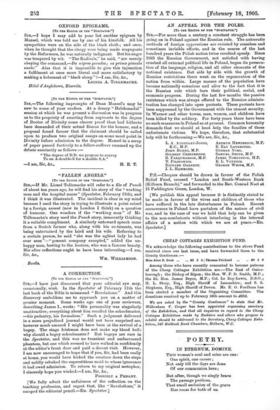 Sin,—I hope I may add to your list another epigram by Mansell, which was told me by one of his kinsfolk. All his sympathies were on the side of the black cloth ; and once, when he thought that the clergy were being made scapegoats by the Reformers, he was naturally indignant. But his anger was tempered by wit. "The Radicals," he said, "are merely obeying the command,—Da nigras pccudes ; ea prima piacula sunto." Alas that it is impossible to give this injunction a fulfilment at once more literal and more satisfactory by making a holocaust of "black sheep" !—I am, Sir, &c., LIONEL A. TOLLEBIACHE.