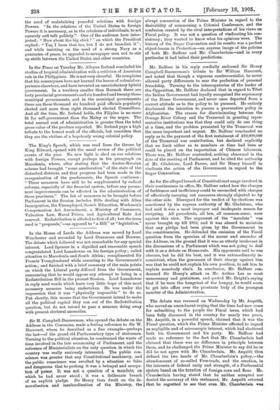 Page 2, 18 February 1905 — As for the alleged breach of Constitutional usage involved in
Close

As for the alleged breach of Constitutional usage involved in

their continuance in office, Mr. Balfour asked how the charges of feebleness and inefficiency could be reconciled with charges of effectively carrying out measures strongly objected to by the other side. Disregard for the verdict of by-elections was sanctioned by the express authority of Mr. Gladstone, who had said it was a most improper and inadequate reason for resigning. All precedents, all law, all common-sense, were against this view. The argument of the " mandate " was never brought up till 1902, and it was absurd to maintain that any pledge had been given by the Government to the constituencies. He defended the omission of the Fiscal question from the speeches of the mover and seconder of the Address, on the ground that it was as utterly irrelevant in the discussions of a Parliament which was not going to dekl with it as a debate on Home-rule. His opponents said he was obscure, but he did his best, and it was extraordinarily in- consistent, when the gravamen of their charge against him was that he could not explain his own position, to ask him to explain somebody else's. In conclusion, Mr. Balfour con- demned Sir Henry's attack on Mr. Arthur Lee as most unnecessary and gratuitous, and quoted Mr. Bright's saying that if he were the hungriest of the hungry, be would scorn to get into office over the prostrate body of the youngest member of the Administration.