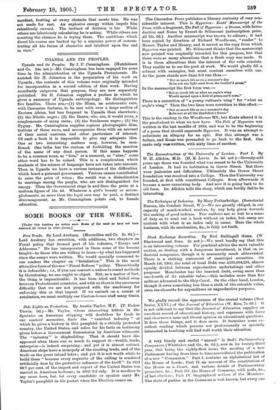 Uganda and its Peoples. By J. F. Cunningham. (Hutchinson and

Co. 24s. net.)—Mr. Cunningham has been engaged for some time in the administration of the Uganda Protectorate. He assisted Sir H. Johnston in the preparation of his work on Uganda ; the contents of this volume were originally intended for incorporation in a second edition of that work. Having manifestly outgrown that purpose, they are now separately published. Sir H. Johnston supplies a preface in which he gives a summary of Uganda anthropology. He distinguishes five families. These are,—(1) the Hima, an aristocratic race, with Caucasian features, to be met with over a large section of Eastern Africa, but less frequent in Uganda than elsewhere ; (2) the Nilotic negro ; (3) the Bantu, who are, it would seem, a conglomerate of many races; (4) the Soudanese negro ; (5) the Pygmy. Mr. Cunningham supplies copious photographic illus. trations of these races, and accompanies them with an account of their social customs, and other particulars of interest. Oft such a book it is impossible to give any adequate idea. One or two interesting matters may, however, be men- tioned. One tribe has the custom of forbidding the mention of the name of any dead person. If this name happens to be a common noun, as "lion," or a numeral, as "nine," some other word has to be coined. This is a complication which students of the science of language have not taken into account. Then in Uganda we have a curious instance of the difficulties which beset a paternal government. Various causes contributed to raise the price of wives ; the result was a disinclination to marriage among the people, who are not distinguished for energy. Then the Government steps in and fixes the price at a uniform figure of 13s. 4.d. Whatever a girl's beauty or accom- plishments, no more than the legal sum may be paid, a distinct discouragement, as Mr. Cunningham points out, to female education.