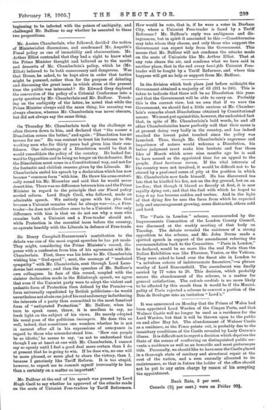 Page 3, 18 February 1905 — On Thursday Mr. Chamberlain took up the challenge so often
Close

On Thursday Mr. Chamberlain took up the challenge so often

thrown down to him, and declared that "the sooner a Dissolution comes the better," and again : "Dissolution has no terrors for me." He was content to trust his fortunes to the working men who for thirty years had given him their con- fidence. One advantage of a Dissolution would be that it would consolidate the policy of the country. He looked for- ward to Opposition and to being no longer on the defensive. But the Dissolution must come in a Constitutional way, and not for the fantastic and childish reasons given by the Liberals. Mr. Chamberlain ended his speech by a declaration which has now become "common form "with him. He threw his arms oratori- cally round his Mr. Micawber and said that he would never desert him. There was no difference between him and the Prime Minister in regard to the principle that our Fiscal policy needed reform. Lord Hugh Cecil, who followed, made an admirable speech. We entirely agree with his plea that because a Unionist remains what he always was—i.e., a Free- trader—he does not therefore cease to be a Unionist. Our only difference with him is that we do not see why a man who remains both a Unionist and a Free-trader should not, while Protection is the essential issue before the country, co-operate heartily with the Liberals in defence of Free-trade.