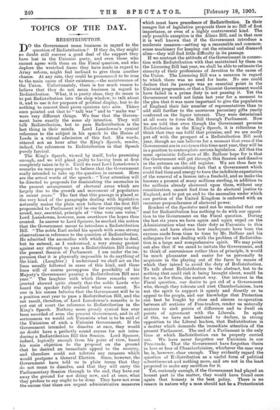 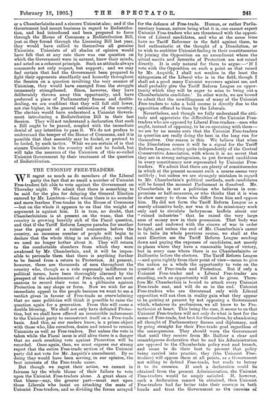 Page 4, 18 February 1905 — D O the Government mean business in regard to the question
Close

D O the Government mean business in regard to the question

of Redistribution ? If they do, they might no doubt still recover a good deal of the support they have lost in the Unionist party, and even those who cannot agree with them on the Fiscal question, and who deplore the wretched fiasco they have made in regard to Army reform, might feel inclined to give them another chance. At.any rate, they could be pronounced to be true to the main cause of their existence,—the maintenance of the Union. Unfortunately, there is too much reason to believe that they do not mean business in regard to Redistribution. What, it is pretty clear, they do mean is to put Redistribution into the shop window, to talk about it, and to use it for purposes of political display, but to do nothing to convert their pious opinions into acts. Thiers once pointed out that to "talk war" and to "make war" were very different things. We fear that the Govern- ment have exactly the same sly intention. They will talk Redistribution, but to pass Redistribution is the last thing in their minds. Lord Lansdowne's cynical reference to the subject in his speech in the House of Lords is a virtual admission of this fact. His words, uttered not an hour after the King's Speech, render, indeed, the references to Redistribution in that Speech purely, farcical.

The King's Speech, viewed by itself, looks promising enough, and we will plead guilty to having been at first completely taken in by it. Until we read Lord Lansdowne's remarks we were prepared to believe that the Government really intended to take up the question in earnest. Here are the actual words of the speech : "Your attention will be directed to proposals for diminishing the anomalies in the present arrangement of electoral areas which are largely due to the growth and movement of population in recent years." . The fact that this passage is placed at the very head of the paragraphs dealing with legislation naturally makes the plain ,man believe that the first Bill propounded to Parliament will be one for carrying out the sound, nay, essential, principle of "One vote one value." Lord .Lansdowne, however, soon overthrew the hopes thus created. In answer to Lord Spencer, he mocked the notion that the Government meant to introduce a Redistribution Bill. "The noble Earl ended his speech with some strong observations in reference to the question of Redistribution. He admitted the anomalies with which we desire to deal, but he entered, as I understood, a very strong protest against any attempt to pass a Redistribution Bill during the ,present Session of Parliament. I am under the im- pression that it is physically impossible to do anything of the kind. (Laughter.) I understand we shall act on the lines usually followed in cases of this kind, and these lines will of course presuppose the possibility of his Majesty's Government passing a Redistribution Bill next year." The laughter with which these remarks were greeted showed quite clearly that the noble Lords who heard the speaker fully realised what was meant. No one in his senses believes that the Government will be in a position next year to pass a Redistribution Bill, and the net result, therefore, of Lord Lansdowne's remarks is to put out of court the reference to Redistribution in the King's Speech. Nothing more grossly cynical has ever been recorded of even the present Government, and in all seriousness we would ask Unionists what is to be said of the Unionism of such a Unionist Government. If the Government intended to dissolve at once, they would no doubt have a perfectly sound excuse for not intro- ducing a Redistribution Bill this Session. Lord Spencer, indeed, logically enough from his point of view, based his main objection to the proposal on the ground that he desired an immediate appeal to the country, and therefore could not tolerate any measure which would postpone a General Election. Since, however, the Government have told us in plain terms that they do not mean to dissolve, and that they will carry the Parliamentary Session through to the end, they have cut away the ground for not doing now, and at once, what they profess to say ought to be done. They have not even the excuse that there are urgent administrative measures meagre list of legislative proposals there is no Bill of first importance, or even of a highly controversial kind. The only possible exception is the Aliens Bill, and in that case it is well known that if the Government introduce a moderate measure—setting up a reasonable and common- sense machinery for keeping out the criminal and diseased alien—they will find little difficulty in its passage. If we contrast the attitude of the Government in connec- tion with Redistribution with that maintained by them on the Licensing Bill last year, we shall be able to estimate the sincerity of their professions of devotion to the cause of the Union. The Licensing Bill was a measure in regard to which there was no need for haste. No one could declare that its passage was an essential point in the Unionist programme, or that a Unionist Government would have failed in a prime duty in not passing it. Yet the Government would not listen last year for a moment to the plea that it was more important to give the population of England their fair number of representatives than to add still further to the enormous pecuniary gifts yearly conferred on the liquor interest. They were determined at all costs to force the Bill through Parliament. Now we are told that even though the Government promise Redistribution in the King's Speech, it is ridiculous to think that they can fulfil that promise, and we are coolly put off with the prospect of a Redistribution Bill next year, though no one believes for a moment that even if the Government are in existence this time next year, they will be in a position to contemplate serious legislation. All that the most optimistic followers of Mr. Balfour hope for is that the Government will get through this Session and dissolve in the autumn on the old register. We are thus face to face with the astonishing fact that a Government which could find time and energy to turn the indefinite expectation of the renewal of a license into a freehold, and so make the brewers a present of many millions sterling, in addition to the millions already showered upon them, without any consideration, cannot find time to do electoral justice to England, and to put an end to the anomalies under which one portion of the United Kingdom is endowed with an immense preponderance of electoral power.

Readers of the Spectator need not be reminded that our zeal for Redistribution has nothing to do with our opposi- tion to the Government on the Fiscal question. During the last six years we have again and again urged on the Administration what was their duty as Unionists in this matter, and have shown how inadequate have been the excuses made from time to time by Mr. Balfour and, his colleagues for not dealing with the problem of Redistribu- tion in a large and comprehensive spirit. We may point out also that if we cared to imitate the Government, and to think of convenience rather than of principle, it would be much pleasanter and easier for us personally to acquiesce in the playing out of the farce by means of which they intend to avoid the duty of Redistribution.

To talk about Redistribution in the abstract, but to do nothing that could risk it being brought about, would be for us, as for them, the easiest way. Our interest in the Fiscal question, our desire to get rid of a Government who, though they tolerate and abet Chamberlainism, have not the spirit to support it openly and directly or to appeal to the people, and our knowledge that Protection can best be fought by close and sincere co-operation between all sections of Free-traders, render us naturally anxious to sink points of difference and to dwell on points of agreement with the Liberals. In spite of this, we have not hesitated to declare, in strong opposition to the Liberal leaders, that Redistribution is a matter which demands the immediate attention of the present Parliament. The end of a Parliament is the only time at which Redistribution can be properly carried out. We have never forgotten our Unionism in our Free-trade. That the Government have forgotten theirs in love or fear of Chamberlainism, whichever the case may be, is, however, clear enough. They evidently regard the question of R3distribution as a useful form of political advertisement and nothing more, and are not in the least prepared to make any sacrifices for it. Yet, curiously enough, if the Government had played an honest part in the matter, they would have found once again that honesty is the best policy. There is no reason in nature why a man should not be a Protectionist or a Chamberlainite and a sincere Unionist also; and if the Government had meant business in regard to Redistribu- tion, and had introduced and been prepared to force through the House of Commons a Redistribution Bill, just as they forced through the Licensing Bill last year, they would have rallied to themselves all genuine Unionists. Unionists of all shades of opinion would have felt that at any rate there was one question on which the Government were in earnest, knew their minds, and acted on a coherent principle. Such an attitude always commands not only respect, but support ; and we may feel certain that had the Government been prepared to fight their opponents steadfastly and honestly throughout the Session on a question involving the very essence of Unionism, they would have emerged from the struggle immensely strengthened. Since, however, they have deliberately thrown away this opportunity, and have preferred a piece of Parliamentary finesse and double- dealing, we are confident that they will fall still lower, not rise higher, in the general estimation of the country. The electors would have understood a Unionist Govern- ment introducing a Redistribution Bill in their last Session. They will not understand a declaration that such a Bill ought to be passed, coupled with the immediate denial of any intention to pass it. We do not profess to understand the temper of the House of Commons, and it is possible that that assembly may be fooled, or pretend to be fooled, by such tactics. What we are certain of is that sincere Unionists in the country will not be fooled, but will take the measure of the Unionism of this so-called Unionist Government by their treatment of the question of Redistribution.