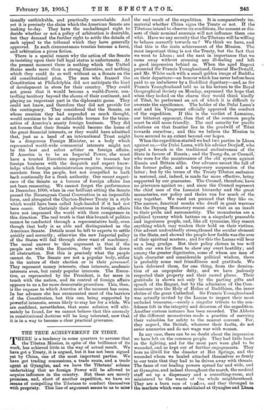 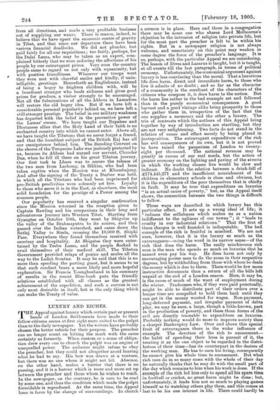 T HERE is a tendency in some quarters to assume that

the Tibetan Mission, in spite of the brilliance of its work, has achieved little in the way of actual result. We have got a Treaty, it is argued, but it has not been signed yet by China, one of the most important parties. We have got trading concessions, a trade route, and a trade agent at Gyangtee, aud we have the Tibetans' solemn undertaking that no foreign Power will be allowed to acquire influence in the country. But these are merely promises, and, short of another expedition, we have no means of compelling the Tibetans to conduct themselves with propriety. This line of argument seems to us to mist the real result of the expedition. It is comparatively im- material whether China signs the Treaty or not. If the Tibetans intend to observe its conditions, the consent or dis- sent of their nominal suzerain will not influence them one whit. Have we any security that the Tibetans will be willing to behave correctly towards us ? We think we have, and that this is the main achievement of the Mission. The most important thing is not the Treaty, but the fact that we went to Lhasa ; and the next in importance that we came away without arousing any ill-feeling and left a good. impression behind us. When the aged Regent presented Sir Francis Younghusband, General MacDonald, and Mr. White each with a small golden image of Buddha on their departure—an honour which has never before been paid to an unbeliever by a Buddhist dignitary—and, as Sir Francis Younghusband told us in his lecture to the Royal Geographical Society on Monday, expressed the hope that when they looked on the charm they would think kindly' of Tibet, he performed an act of which it is difficult to overrate the significance. The holder of the Dalai Lama's seal and his Vicegerent officially apprOved the conduct of the expedition. If this is the verdict Of Lamaism,' our bitterest opponent, then that of the common people must be still more friendly. The real security 'for pacific relations on that frontier lies in the goodwill of Tibet towards ourselves ; and this we believe the Mission to have secured to an extent beyond. our hopes.

When the expedition started we had two parties in Lhasa against us,—the Dalai Lama, with his adviser Dorjieff, who urged a breach in the traditional exclusiveness of the State in favour of Russia ; and the Tsong-du, or Council,' who were for the maintenance of the old system against' Russia and Britain alike. Our advance nieant the fall of the former policy, and a temporary suspension of the latter ; but by the terms of the Treaty Tibetan seclusion is restored, and, indeed, is made far more effective, being supported by our guarantee. The Council, therefore; have no grievance against us ; and since the Council represent the chief men of the Lamaist hierarchy and the great' monasteries, our policy and theirs run for much of the way together. We need not pretend that they like Us.' The narrow, fanatical monks who dwell in great warrens' like the Depung Monastery resent our visit as an insult' to their pride and sacrosanctity. The monatiteries are a political tyranny which battens on a singularly peaceable and ingenuous people, and, like all tyrannies, they resent anything which may weaken their hold 'on their Victims.' Our advent undoubtedly strengthened the secular element' in the State, and showed. the people how feeble was the arm' of their spiritual masters ; and for this the Lamas will bear us a long grudge. But their policy chimes in too well with our own for them to show any overt hostility ; and among the greater dignitaries, some of whom are men of high character and. considerable political wisdom, there is probably some real friendliness and gratitude. We have delivered them, for one thing, from the domina- tion of an unpopular deity, and we have jealously respected. their property and their sacred places. Their gratitude is shown not only by the parting gifts and speech of the Regent, but by the admission of the Com- missioner into the Holy of Holies of Buddhism, the inner shrine of the great Cathedral. Sir Francis Younghusband -was actually invited by the Lamas to inspect their most secluded treasures,—surely a singular tribute to the con- fidence felt in the integrity and decorum of the expedition. Another curious instance has been recorded. The Abbots of the different monasteries made a practice of carrying their valuables for safety to the nearest convent. 'For, they argued, the British, whatever their faults, do not enter nunneries and do not wage war with women.

In any case, there can be no doubt about the impression we have left on the common people. They had little heart in the fighting, and for the most part were glad to be wounded, and so kept out of further engagements. They bore no illwill for the disaster at Hot Springs, and. the wounded whom we healed attached themselves so firmly to our train that they had to be driven away with threats. The fame of our healing powers spread far and wide, and at Gyangtse, and indeed throughout the march, the medical staff set up a dispensary and a consulting-room, and ministered to the wants of the whole neighbourhood. They are a born race of ti adore, and they thronged to the markets which were established at Gyangtse and Lhasa from all directions, and made a very profitable business out of supplying our wants. There is reason, indeed, to believe that we have upset the economic centre of gravity in Tibet, and that since our departure there have been various financial deadlocks. We did not plunder, but paid fairly for all our requisitions ; too fairly, perhaps, for the Dalai Lama, who may be taken as an expert, com- plained bitterly that we were seducing the affections of his people by our extravagant prices. Very soon the country people came to regard us not only with equanimity, but with positive friendliness. Wherever our troops wont they were met with cheerful smiles and kindly, if unin- telligible, greetings. Henceforth an Englishman, instead of being a bogey to frighten children with, will be a beneficent stranger who heals sickness and gives good prices for produce, a visitor strongly to be encouraged. Not all the fulminations of all the Abbots in Lamadom will restore the old bogey idea. But if we have left a considerable personal popularity behind us, we have left a still stronger prestige. The belief in our military weakness has departed with the belief in the preventive power of the Lamas' curses. We have taught our Nepalese and Bhutanese allies that the Holy Land of their faith is no enchanted country into which we cannot enter. Above all, we have taught the Tibetans that we never forget a friend, and that the humblest subject of the British Raj has all our omnipotence behind him. The Samding Convent on the shores of the Turquoise Lake was jealously protected by us, because its Abbess had nursed our servant, Chunder Das, when he fell ill there on his great Tibetan journey. Our first task in Lhasa was to secure the release of the two men from Lachung, in Sikkim, who had been taken captive when the Mission was at Khambajong. And after the signing of the Treaty a Durbar was held, in which all the Tibetans who had been imprisoned for pro-British proclivities were solemnly set free. Loyalty to those who serve it is in the East, as elsewhere, the most solid foundation for the prestige of a Power among the common people. Our popularity has received a singular confirmation since the Mission returned in the reception given to Captain Rawling and his companions in their long and adventurous journey into Western Tibet. Starting from Gyangtse on October 10th, they went by Shigstse up the valley of the Brahnutputra to its source, and then passed over the Indian watershed, and came down the Sutlej Valley IA Simla, crossing the 18,000 ft. Shipki Pass. Everywhere they found themselves received with courtesy and hospitality. At Shigatse they were enter- tained by the Teshu Lama, and the people flocked to avail themselves of their medical skill. The Tibetan Government provided relays of ponies and mules all the way to the Ladak frontier. It may be said that this is no more than speeding the parting guest, but it seems to us that such conduct bears a more likely and more hopeful explanation. Sir Francis Younghusband in his summary of results in the recent Blue-book puts the friendly relations established with all classes as the greatest achievement of the expedition, and such a success is not only most desirable in itself, but is the only thing which can make the Treaty of value.