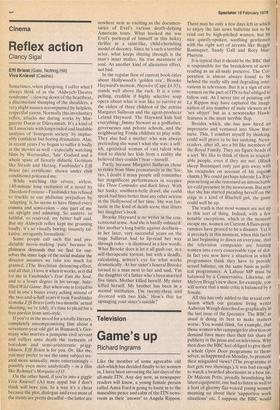 Sometimes, when playgoing, I suffer what I always think of as the `Aldwych-Theatre syndrome' — slowing down of the heartbeat, a disconsolate slumping of the shoulders, a very slight nausea accompanied by helpless, respectful yawns. Normally this involuntary reflex, attacks me during works by Marguerite Duras or Diirrenmatt. It's a kind of tic I associate with longwinded and laudable analyses of 'bourgeois society' by implacably confident but boring dramatists. Alas, in recent years I've begun to suffer it badly at the movies as well — especially watching films by Wertmuller, 'late' Godard and a whole spate of fiercely didactic Germans like Straub and Herzog. Fassbinder's Effi finest (no certificate: shown under club conditions) poleaxed me.

While watching this severe, airless, 140-minute long recitation of a novel by Theodore Fontane — Fassbinder has refused to truckle to our philistine prejudices by 'adapting' it, he seems to have filmed every comma and semi-colon — one part of me sat upright and admiring. So austere, so faithful, so reserved, my better half said. But my Aldwych reflex kept me groaning loudly, it's so visually boring, insanely talkative, arrbgantly formalistic.

Some people call such flat and predictable movie-making 'pure' because its plainness demands that we find for ourselves the inner logic of the social malaise the director assumes we take too much for granted. (The Brechtian distancing-effect, and all that.) I love it when it works, as it did for me in Fassbinder's Fear Eats the Soul, and to a lesser degree in his savage, hatefilled Wild Game. But when one is forced to feel in one's bones every aching second of the two-and-a-half years it took Fassbinder to make Effi Briest (only two months' actual shooting, we're told), it's time to plead for a free pardon from anti-style.

If you're in the mood for a totally literary, completely uncompromising film about a seventeen-year-old girl in Bismarck's Germany who marries a pompous civil servant and suffers unto death the torments of boredom and semi-aristocratic priggishness, Effi Briest is for you. Or, like me, you may prefer to see the same subject treated more sensually, more entertainingly — possibly even more analytically — in a film like Rohmer's Marquise of O.

On the other hand, if you're into a giggle Viva Knievel! (A) may appal but I don't think will bore you. In a way it's a cheat because the plot, dialoguoand even most of the stunts are pretty dreadful —the latter are nowhere near as exciting as the documentaries of Evel's various death-defying American tours. What hooked me was Evel's portrayal of himself in this hokey ..thriller as a saint-like, child-cherishing model of decency. Since he's such a terrible actor, what keeps shining through is the man's inner malice, his true meanness of soul. As another kind of alienation effect, not bad.

In the regular flow of current book-titles about Hollywood's 'golden era', Brooke

Hayward's memoir, Haywire (Cape L4.95), stands well above the ruck. It is a com

pelling, credible if highly selective soap opera about what it was like to survive as the eldest of three children of the actress Margaret Sullavan and the agent-producer Leland Hayward. The Hayward kids had everything: Jimmy Stewart as a godfather, governesses and private schools, and the neighbouring Fonda children to play with. They also had a mother who was always pretending she wasn't what she was: a selfish, egotistical woman of vast talent who tried to shield her kids from a reality she believed they couldn't bear — herself.

Partly because Margaret Sullavan chose to retire from films prematurely in the 'for._ ties, I doubt if many people still remember

her magnificent performances in weepies like Three Comrades and Back Street. With

her husky, southern-belle drawl, she could speak bad lines better than any other actress in the Hollywood of her time. She was fantastic in the kind of death scene that litters her daughter's book.

Brooke Hayward is no writer in the conventional sense. And she is hardly unbiased.

Her mother's long battle against deafness —

in her later, very successful iyears on the stage Sullavan had to lip-read her way

through roles — is dismissed in a few words.

What Brooke does is let it all gush out, in a self-therapeutic torrent, but with a deadly, calculating, actress's eye for what works dramatically. At her sister's funeral Brooke turned to a man next to her and said, 'I'm the daughter of a father who's been married five times. Mother killed herself. My sister killed herself. My brother has been in a mental institution. I'm twenty-three and divorced with two kids.' How's that for upstaging your sister's suicide?