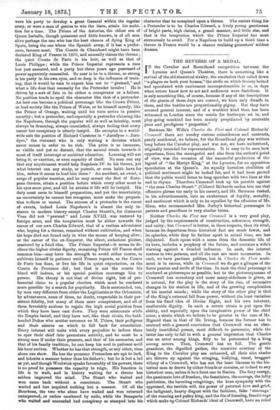 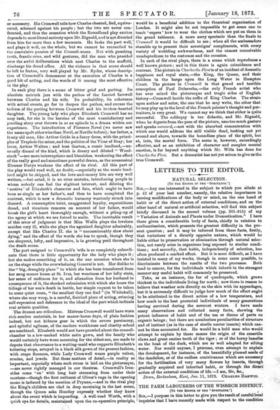 THE REVERSE OF A MEDAL TN the Cavalier and Roundhead

Lyceum and Queen's Theatres, there is something like a revival of the old theatrical rivalry, the emulation that called down "a plague on both your houses," the strife on which Society betted and speculated with excitement incomprehensible to us, in days when actors knew how to act and audiences were fastidious. It is only something like, of course, because if any of the descriptions of the giants of those days are correct, we have only dwarfs in these, and the battles are proportionably pigmy. But they have aroused general interest, and of a worthier kind than has been witnessed in London since the mania for burlesque set in, and play-going mankind has been mainly propitiated by execrable puns and prodigious "properties."

Between Mr. Wills's Charles the First and Colonel Richards' Cromwell there are sundry curious coincidences and contrasts, purely accidental, we believe, for the Roundhead play was written long before the Cavalier play, and was not, we have understood, originally intended for representation. It is easy to be seen how opportune, from the managerial and also from the author's point of view, was the occasion of the successful production of the legend of "the Martyr King," at the Lyceum, for an opposition speculation at the Queen's. An equally harmless ebullition of political sentiment might be looked for, and it had been proved that the public would listen to long speeches with two lines at the end in rhyme. Therefore Cromwell took up his parable against "the man Charles Stuart" (Colonel Richards makes him use that offensive phrase too early in his career), and Mr. Bateman rushed, in his advertisements, into an exuberance of loyalty, morality, and sentiment which is only to be equalled by the effusions of Mr. Slum, who recommended Mrs. Jarley's historical personages to parents and guardians in very similar terms.

Neither Charles Site First nor Cromwell is a very good play, judged by the requirements of construction, coherence, strength, and unity ; but Cromwell is better, in these respects, than its rival, because its departures from historical fact are much fewer, and its episodes, while they lie farther apart in actual time, are less disjointed. Each opens with a scene from the domestic life of its hero, includes a prophecy of the future, and contains a wife's warning against a dreaded influence. In each, the interest centres in two persons, and all the rest are mere accessories. In each, we have partisan politics, but in Charles the First senti- ment is in excess, while in Cromwell we do get a glimpse of the fierce passion and strife of the time. In each the chief personage is rendered as picturesque as possible, but to the picturesqueness of Cromwell less monotony and more many-sidedness is given, as is natural, for the play is the story of his rise, of successive changes in his station in life, and of the growing complication of his mental moods ; while the story of the other play is that of the King's external fall from power, without the least variation from his fixed idea of Divine Right, and his own inherent, unalterable dignity. In each a severe strain is put upon the ability, and especially upon the imaginative power of the chief actor, a strain which we believe to be greater in the ease of Mr. Rignold than in that of Mr. Irving, because the former has to contend with a general conviction that Cromwell was an abso- lutely inartificial person, most difficult to personate, while the latter has only to fall in with a general impression that Charles was an actor among kings, fitly to be personated by a ling among actors. Then, Cromwell has no foil. The gentle grandeur, the dignified pathos, the sensitive courtesy of the King in the Cavalier play are enhanced, all their nice shades are thrown up against the cringing, bullying, venal, braggart villany of a Cromwell, who has not the least likeness to the his- torical man as drawn by either friends or enemies, or indeed to any historical man, unless it be a faint one to Barere. The fiery energy, the passionate love of freedom, the fanaticism, the courage, the lofty patriotism, the haunting misgivings, the keen sympathy with the oppressed, the terrible will, the power of paternal love and grief, the indignant, hearty disgust with the faithless, false ' cozenage ' of the cunning and paltry king, and the fits of foaming, frantic rage which make up Colonel Richards' ideal of Cromwell, have no relief

or accessory. His Cromwell tells how Charles cheated, lied, equivo- cated, schemed against his people ; but the two are never con- fronted, and thus the sensation which the Roundhead play excites depends in most literal entirety upon Mr. Rignold, and is not diverted from him for more than a few moments. He looks the part well,' and plays it well, on the whole, but we cannot be reconciled to the convulsive passion of the Council-scene. Not with gnashing teeth, frantic cries, and wild gestures, did the man who presided over the awful deliberations which sent Charles to the scaffold, discharge his &Kiel office. All the violence in that scene should be left to Ireton, very well played by Mr. Ryder, whose descrip- tion of Cromwell's demeanour at the execution of Charles is a good bit of acting, and the words of it among the most effective in the play.

In each play there is a scene of bitter grief and parting. Its absolute untruth jars with the pathos of the fancied farewell between Charles and his wife. Its probability, its coherence with actual events, go far to deepen the pathos, and excuse the tedium of the parting between Cromwell and his broken-hearted daughter. The young lady who plays Elizabeth Cromwell has no easy task, for she is the heroine of the Most unsatisfactory and puzzling story ever thrown in as an episode in a drama within our experience. The introduction of Florence Nevel (we never saw the name spelt otherwise than Nevil, or Neville before) ; her father, a frosty old man, like Arthur Grids in a fancy dress, with the princi- ples of Trapbois the miser, and the politics of the Vicar of Bray; her lover, Arthur Walton ; and host Garton, a comic landlord,—un- usually dismal of the kind, which is dreary and diluted" Wood- stock"—are mere interruptions and blemishes, weakening the effect of the really good and sometimes powerful drama, as the nonsensical Eleanor Davys weakens the effect of its rival. All this part of the play would read well, no doubt;—especially as the comic land- lord might be skipped, and the love-and-money bits are very well written,—but acted, it is an utter mistake, introducing people in whom nobody can feel the slightest interest, and diluting the ' motive ' of Elizabeth's character and fate, which ought to have been as single as her father's, and thus to have completed the contrast, which is now a dramatic harmony wantonly struck into discord. A consumptive taint, exaggerated loyalty, superstitious dread, and vicarious remorse on account of her father, would break the girl's heart thoroughly enough, without a piling-up of the agony at which we are forced to smile. The inevitable result of this error of judgment is that Miss Wallis plays the lovelorn maiden very ill, while she plays the agonised daughter admirably, except that like Charles II. she is "unconscionably slow about dying," and the effect of the words she has to speak, though they are eloquent, lofty, and impressive, is in growing peril throughout the death scene.

The part assigned to Cromwell's Wife is so completely subordi- nate that there is little opportunity for the lady who plays it ; but she makes something of it, on the one occasion when she is on the stage while the overwhelming General is not. Her dislike to the "big, draughty place" to which she has been transferred from her snug manor house at St. Ives, her weariness of her lofty state, her sense of unfitness for it, and alienation from her husband in consequence of it, the shocked submission with which she hears the tidings of her son's death in battle, her simple request to be taken to some quiet room, "the smallest they can find "(in Whitehall), where she may weep, is a careful, finished piece of acting, evincing self-repression and deference to the ideal of the part which indicate real artistic qualities.

The dresses are ridiculous. Mistress Cromwell would have worn rich sombre materials, in her manor-house days, of plain fashion indeed, but not hideous gear in which the severe parsimony, and spiteful ugliness, of the modern workhouse and charity-school are combined. Elizabeth would not have prowled about the council- chamber in a low-necked white satin gown, and the family who would certainly have worn mourning for the eldest son, are made to depute that observance to a waiting-maid who supports Elizabeth's tottering steps, arrayed in a black silk gown of the present fashion, with crape flounces, while Lady Cromwell wears purple velvet, ermine, and jewels. But these matters of detail,—in reality so important, especially where such stress is laid on the picturesque, —are never rightly managed in our theatres. Cromwell's Iron- sides come 'on' with long hair streaming from under their morions—though the first outburst of Oliver's rage in the opening scene is induced by the mention of Prynne,—and in the rival play the King's children are clad in deep mourning in the last scene, though the Queen asks Huntley expressly whether they know about the event which is impending. A well-read Worth, with a quick eye for details, maintained upon the co-operative principle,

would be a beneficial addition to the theatrical organisation of London. It might also be not impossible to get some one to teach 'supers' how to wear the clothes which are put on them in the grand tableaux. A more sorry spectacle than the finale to Cromwell it would be difficult to see; when all the ambassadors shamble up to present their sovereigns' compliments, with every variety of wobbling awkwardness, and the utmost conceivable unadaptedness to the costumes and the occasion.

In each of the rival plays, there is a scene which reproduces a well known picture ; and in this there is again coincidence and contrast. The *tura in Charles the First is of an incident of domestic happiness and royal state,—the king, the Queen, and their children in the barge upon the Long Water in Hampton Court. The picture in Cromwell is that grand and terrible conception of Paul Delaroche,—the only French artist who has ever seized the picturesque and tragic sides of English history—Cromwell beside the coffin of King Charles. The strain upon author and actor, the one that he may write, the other that he may play up to the level of the French painter's thought and por- traiture, is very great. We cannot say we think that either is quite successful. The soliloquy is too didactic, and Mr. Rignold, when he departs from the pose of the picture, uses too much gesture and speaks outward,—not with the absorbed concentration with which one would address the still visible dead, looking not yet around and above, towards the boundless place of the spirit, but at, into, the mortal form. The scene is, however, exceedingly effective, and as an exhibition of character and complex mental emotion, is far beyond anything which Mr. Wills has done for Charles the First. But a dramatist has not yet arisen to give us the trite Cromwell.