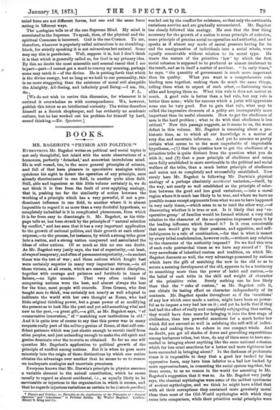 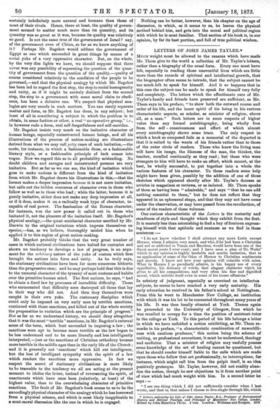 failure,—no light number. That very often indeed the the belief of each tribe in the skill and weight of character conquering nations were the best, and almost always the best of the primitive ruler. Surely nothing can be less likely

for the time, most people will concede. Even Greece, who first than that the " cake of custom," as Mr. Bagehot calls it, -taught men to think, was certainly not nearly as well adapted to can obtain its lasting effect on character independently of its infiltrate the world with her own thought as Rome, who had contents. Mr. Bagehot speaks throughout as if the 'sanctions' little original thinking power, but a great power of so modifying of any law which once made a nation, might have been so power- the present as to look like the past and yet add something vital and ful as to impose a very bad law on it ; and yet he holds that if they new to the past,—a great gift,—a gift, as Mr. Bagehot says, " of had had the effect of really and completely subjugating that nation, conservative innovation," of "matching new institutions to old." they would have done more for bringing it into the first stage of And it is quite true of course to say that this power was in many civilisation, than less powerful sanctions for a much better law respects really part of the military genius of Rome, of that self-con- which did not succeed so well in subduing the self-will of indivi- tdent patience which was just elastic enough to recruit itself from duals and making them to cohere in one compact whole. And alien peoples, and just unbending enough to make the old spirit and no doubt, you get all shades of fierce and grovelling superstitions genius dominate over the recruits so obtained. So far no one will among barbarous tribes, but then, do any of them seem to have sue- -question Mr. Bagehot's application to political growth of the ceeded in bringing about anything like the same national cohesion principle of conflict among nations. But it is when he goes more which far less cruel sanctions for a better and more righteous law minutely into the origin of those distinctions by which one nation have succeeded in bringing about? In the darkness of prehistoric -obtains the advantage over another that he seems to us to reason times it is impossible to deny that a good law backed by less On inadequate analogies and uncertain premisses. oppressive fears, may have been inferior to a bad law backed by Everyone knows that Mr. Darwin's principle in physics assumes more oppressive fears, in cementing the social system togother, but a variable element in the animal constitution, which he seems there seems, to us no reason in the world for assenting to Mr. usually to regard as almost accidental; i.e., as equally likely to be 1 Bagehot's suggestion that it was so. As Mr. Bagehot very justly -serviceable or injurious to the organisation in which it occurs, and I says, the classical mythologies were some of the mildest specimens that he regards injurious variations as certain to be (czteris paribus) of ancient mythologies, and we think he might have added that

with all their corruptions they contained more genuinely moral

* Physics ani Polities; or, Thoughts on the Application of the Principles of " Natura 1 ideas than ,selestien --and "Inheritance" to Political Society. By Walter Bagehot. London: most of the Old-World mythologies with which they Henry S. Ring and Co. came into comparison, while their primitive social principles were

weeded out by the conflict for existence, so that only the serviceable variations survive and are gradually accumulated. Mr. Bagehot has closely followed this analogy. He sees that the first thing necessary for the growth of a nation is some principle of cohesion, some principle of genuine social co-operation and authority, and he speaks as if almost any mode of moral pressure having for its end the amalgamation of individuals into a social whole, were equally conceivable without relation to its moral type. He treats the nature of the primitive 'law' by which the first social cohesion is supposed to be produced as almost irrelevant to the result, and as in itself a matter of accident. "In early times," he says, "the quantity of government is much more important than its quality. What you want is a comprehensive rule binding men together, making them do much the same things, telling them what to expect of each other, — fashioning them alike and keeping them so. What this rule is does not matter so much. A good rule is better than a bad rule, but any rule is better than none ; while for reasons which a jurist will appreciate none can be very good. But to gain that rule, what may be called the impressive elements of a polity are incomparably more important than its useful elements. How to get the obedience of men is the hard problem ; what to do with that obedience is less critical." Now this passage suggests, as it seems to us, the worst defect in this volume. Mr. Bagehot is reasoning about a pre- historic time, as to which all our knowledge is a matter of ..—,_ very dim and uncertain inference. And yet he assumes as pretty MR. BAGEHOT'S "PHYSICS AND POLITICS."* certain what seems to us the most improbable of improbable certainly indefinitely more natural and humane than those of most of their rivals. Hence, there at least, the quality of govern- ment seemed to matter much more than its quantity, and its quantity was so great as it was, because its quality was relatively so good. Is not the same true of the government of Israel? nay, of the government even of China, so far an we know anything of it? Perhaps Mr. Bagehot would adduce the government of Egypt as one which succeeded in great things by means of a social yoke of a very oppressive character. Bat, on the whole, by the very dim lights we have, we should suppose that there never was any possibility of separating the question of the quan- tity of government from the question of the quality,—quality of course considered relatively to the condition of the people to be governed,—and that the physical analogy by which Mr. Bagehot has been led to regard the first step, the step to social homogeneity and unity, as if it might be entirely distinct from the second step, the step to a government with some moral claim to obedi- ence, has been a delusive one. We suspect that physical ana- logies are very unsafe in such matters. You can rarely separate matter and form, as Mr. Bagehot has done, in any subject ; but least of all in considering a subject in which the problem is to obtain, in some fashion or other, a real "co-operative group," i.e., in however rude a form, real self-forgetfulness and self-sacrifice.

Mr. Bagehot insists very much on the imitative character of human beings, especially uninstructed human beings, and all his illustrations of the process of nation-making are illustrations derived from what we may call petty cases of such imitation,—the mode, for instance, in which a fashionable dress, or a fashionable literary style, or a fashionable principle of luck comes into vogue. Now we regard this as in all probability misleading. No doubt children and savages and uninstructed persons are very imitative. But as far as we can see, the kind of imitation which goes to make nations is different from the kind of imitation from which Mr. Bagehot draws his illustrations in this,—that the former makes a deeper impression because it is not mere imitation, but calls out the hidden resources of character even in those who follow as well as in those who lead ; while the latter, because it is purely imitative, either does not make any deep impression at all, or if it does, makes it on a radically weak type of character, in- capable of real power. The fascination of the Roman character, for instance, was the new power it called out in those who imitated it, not the pleasure of the imitation itself. Mr. Bagehot's physical analogy,—the quasi-accidental character ascribed by Mr. Darwin to the original variations which impress themselves on species,—has, as we believe, thoroughly misled him when he applied it to this region of great nation-making.

Mr. Bagehot probably thinks that the very great number of cases in which national civilisations have halted for centuries and shown no tendency to develops a law of progress, is an argu- ment for the arbitrary nature of the yoke of custom which first brought the nations into form and unity. As he truly says, the stationary civilisations have been far more numerous hitherto than the progressive ones; and he may perhaps hold that this is due to the unmoral character of the tyranny of most customs and habits over the primitive human mind. The first nations, he says, "had to obtain a fixed law by processes of incredible difficulty. Those who surmounted that difficulty soon destroyed all those that lay in their way who did not. And then they themselves were caught in their own yoke. The customary discipline which could only be imposed on very early men by terrible sanctions, continued with those sanctions, and killed out of the whole society the propensities to variation which are the principle of progress." But as far as we understand history, we should deny altogether that it was the most " terrible " sanctions, in Mr. Bagehot's external sense of the term, which best succeeded in imposing a law ; the sanctions were apt to become more terrible as the law began to be less understood and to be more literally and less intelligently. interpreted,—just as the sanctions of Christian orthodoxy became more terrible in the middle ages than in the early life of the Church ; and it is generally not 'sanctions' which kill out intelligence, bat the loss of intelligent sympathy with the spirit of a law which renders the sanctions more oppressive. In fact we suspect the secret of stationary civilisations is more likely to be traceable to the tendency we all see acting at the present moment to idolise the letter, instead of reverencing the spirit, of enactments which have once been (relatively, at least) of the highest value, than to the overwhelming character of primitive sanctions. The fault of Mr. Bagehot's book seems to us to be the exceedingly physical character of the analogy which he has borrowed from a physical science, and which is most likely inapplicable to a semi-moral discussion like the one in which he is engaged.

Nothing can be better, however, than his chapter on the age of discussion, in which, as it seems to us, he leaves the physical method behind him, and gets into the moral and political region with which he is most familiar. That section of his book is, in our opinion, by far its best portion, and full of true political wisdom.