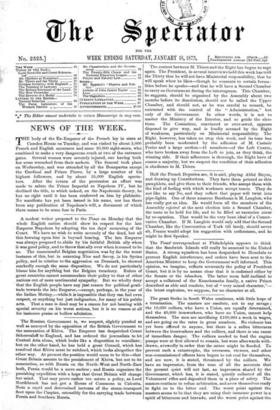 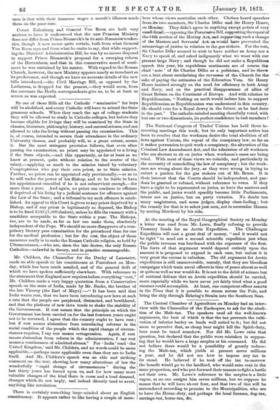 The great Strike in South Wales continues, with little hope

of a termination. The masters are resolute, not to say savage ; the 10,000 colliers, who have a Union, are equally determined, and the 40,000 ironworkers, who have no Union, cannot help themselves. The men are sacrificing /100,000 a week in wages, and are going on the rates in great numbers. No violence has yet been offered to anyone, but there is a sullen bitterness between the ironworkers and the colliers, and there is one cause of immediate danger. The colliers needed to feed the engine pumps were at first allowed to remain, but were afterwards with- drawn, avowedly. in order that the mines might be flooded. To prevent such a catastrophe, the overseers, viewers, and other non-commissioned officers have begun to cut coal for themselves, and are now, it is stated, threatened by the colliers. We have an impression, from the tone of all the accounts that the present quiet will not last, an impression shared by the Government, which has, it is stated, quietly collected all the Volunteers' rifles and deposited them in a place of safety. The masters continue to refuse arbitration, and avow themselves ready to fight on to the bitter end. The worst point against the masters seems to be that they are using their immense power in a spirit of bitterness and bravado, and the worst point against the

men is that with their immense wages a month's idleness sends them on the poor-rate.