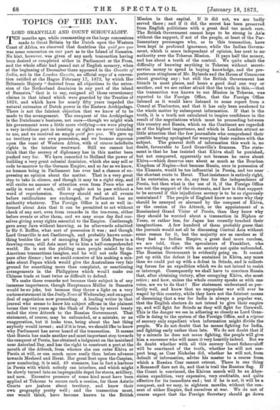 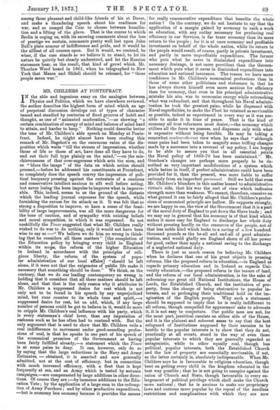 TENmonths ago, while commenting on the large concessions made to Great Britain by the Dutch upon the Western Coast of Africa, we observed that doubtless the quid pro quo was some concession on our part as to the Island of Sumatra. No hint, however, was given of any such transaction having been desired or completed either in Parliament or the Press, and the whole affair had passed out of English memory, when at the beginning of December there appeared in the Gazette of India, not in the London Gazette, an official copy of a conven- tion ratified at the Hague February 17, 1872, by which Her Britannic Majesty "desisted from all objections to the exten- sion of the Netherland dominion in any part of the island of Sumatra," that is to say, resigned all those reversionary claims in that island which were guarded by the Treaties of 1824, and which have for nearly fifty years impeded the natural extension of Dutch power in the Eastern Archipelago. There is not the faintest objection that we know of to be made to the arrangement. The conquest of the Archipelago is the Dutchman's business, not ours—though we might wish his government were a little more vivifying—we were playing a very invidious part in insisting on rights we never intended to use, and we received an ample quid pro quo. We gave up no territory in our own possession, and we became supreme upon the coast of Western Africa, with of course indefinite rights in the interior westward. Still •we cannot but think that the secrecy of diplomacy has in this matter been pushed very far. We have conceded to Holland the power of building a very great colonial dominion, which she may sell or cede to-morrow to the German Empire, and so far as we know, no human being in Parliament has ever had a chance of ex- pressing an opinion about the matter. That is a very great step to take in silence, and though it may be a right step, and will excite no manner of attention even from Peers who are sat-11y in want of work, still it ought not to pass without a word of reprehension. Secrecy should end at all events before ratifications are exchanged, or Parliament has no authority whatever. The Foreign Office is not so well in- formed about Asia that it can be permitted to act without check of any sort, even from remarks in the tea-room, either before events or after them, and we may some day find our- selves giving away rights essential to the Empire. Castlereagh gave away Java without knowing, as he afterwards admitted to Sir S. Raffles, what sort of possession it was ; and though Lord Granville is not Castlereagh, and probably knows some- thing besides the art of managing Kings or Irish Peers in a drawing-room, still Asia must be to him a half-comprehended world. He is not the yielding man people misled by the American transactions imagine, and he will not cede Singa- pore after dinner ; but we could conceive of his making a mis- take about Papua which would give the Australians very fair ground for something more than complaint, or sanctioning arrangements in the Philippines which woull make our Chinese trade at least twice as difficult to defend.