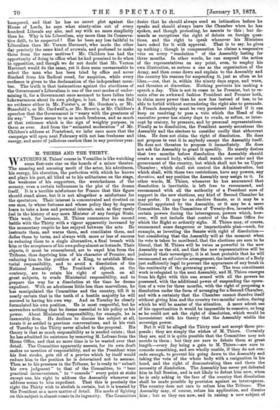 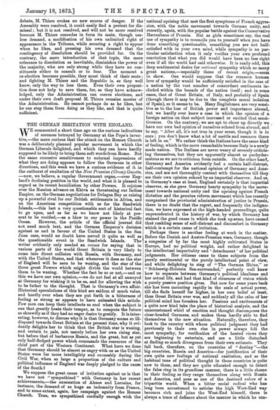 M. THIERS AND THE THIRTY.

IVATCHING M. Thiers' course in Versailles is like watching some first-rate star on the boards of a minor theatre. The amazing and amusing merit of the actor, his adroitness, his energy, his elocution, the perfection with which he knows and plays his part, all blind us to his solitariness on the stage, the weakness of his supporters, the wretchedness of the scenery, even a certain tediousness in the plot of the drama itself. It is a terrible misfortune for France that this figure should stand alone, but it is not altogether a misfortune for the spectators. Their interest is concentrated and rivetted on one man, in whose fortunes and whose policy they by degrees learn to take a keen and personal interest, such as they rarely feel in the history of any mere Minister of any foreign State. This week, for instance, M. Thiers commences his second battle with the Thirty with a vigour apparently increased by the momentary respite he has enjoyed between the acts. He instructs them, and warns them, and conciliates them, and 43efies them by turns, and always with more or less of success in reducing them to a single alternative, a final breach with him or the acceptance of his own policy almost as it stands. Their objects, it must be remembered, are to expel him from the Tribune, thus depriving him of his character of Premier, and reducing him to the position of a King, to establish Minis- terial responsibility, and to avoid a dissolution of the National Assembly. The President's objects, on the contrary, are to retain his right of speech on all great subjects, to evade Ministerial responsibility, and to prepare the way for a dissolution at the time he deems expedient. With an adroitness little less than marvellous, he has manipulated the Committee and the country, till it is nearly certain that in the teeth of a hostile majority he will succeed in having his own way. And on Tuesday he clearly formulated his own position. He is most respectful, but he surrenders nothing that he deems essential to his policy or his power. About Ministerial responsibility, for example, he is inexorably firm. He declines to discuss the subject at all, treats it as settled in previous conversations, and in his visit of Tuesday to the Thirty never alluded to the proposal. His theory is that as much responsibility as is needed exists ; that he has admitted its existence by removing M. Lefranc from the Home Office, and that no more time is to be wasted over that detail. The Committee apparently assents, for its own draft makes no mention of responsibility, and so the President wins his first stroke, gets rid of a proviso which by itself would reduce him to the position he is determined not to assume. Then as to his presence in the Tribune, he is ready to "submit his own judgment" to that of the Committee, to "bear practical inconvenience," to " concede " every point at stake except one, his right to address the Assembly whenever an address seems to him expedient. That this is precisely the right the Thirty wish to abolish is certain, but it is treated by the President as a mere matter of detail. His mode of fighting on this subject is almost comic in its ingenuity. The Committee

desire that he should always send an intimation before he speaks and should always leave the Chamber when he has spoken, and though protesting, he assents to this ; but de- mands as exceptions the right of debate on foreign ques- tions, and the right to speak whenever his Ministers have asked for it with approval. That is to say, he gives up nothing ; though in compensation he claims a suspensive veto on every " resolution " of the Assembly lasting for three months. In other words, he can suspend the action of the representatives on any point, even, to employ his own illustration, so serious a one as the organisation of the Army, and then come down and explain to the Assembly and the country his reasons for suspending it, just as often as he likes,—can, that is, within the ninety days argue, and warn, and threaten at discretion. Nothing prevents his making a speech a day. This is not to cease to be Premier, but to re- main after an awkward fashion President and Premier both, to claim more power than he now has instead of less, to be able to forbid without surrendering the right also to persuade. A French Assembly must be very persistent indeed if it can keep on resolving to pass a vote which the Head of the executive power has ninety days to evade, or soften, or inter- cept by oratory, by pressure, and by personal representations. Finally as to dissolution, the President merely accustoms the Assembly and the electors to consider coolly that abhorrent idea. He does not claim the right of dissolution. He does not propose to vest it in anybody except the Assembly itself. He does not threaten to propose it immediately. He does not ask the Assembly to grant it speedily. He merely desires that two months before dissolution the Assembly should create a second body, which shall watch over order and the government of the country, but which shall not be an Upper Chamber ; which shall not control the Administration, but which shall, with those two restrictions, have any powers, any duration, and any position the Assembly may assign to it. In other words, M. Thiers, whenever he has announced that dissolution is inevitable, is left free to recommend, and recommend with all the authority of a President sure of support in the new elections, any kind of Second Chamber he may prefer. It may be an elective Senate, or it may be a Council appointed by the Assembly, or it may be a mere Committee, like the Committee of Twenty-five, invested with certain powers during the interregnum, powers which, how- ever, will not include that control of the Home Office for which the Right so ardently sighs. M. Thiers may, of coarse, recommend some dangerous or impracticable plan—such, for example, as investing the Senate with right of dissolution— but considering that the Assembly will at the moment when its vote is taken be moribund, that the elections are sure to be liberal, that M. Thiers will be twice as powerful in the new Assembly as the old, and that the new representatives will be jealous of their sovereignty, it is at least probable that he will recommend an ad interim arrangement, the institution of a Body just sufficiently legal to prevent the appearance of any break in the continuity of the governing power. The true constituent work is relegated to the next Assembly, and M. Thiers emerges from his fight with this one armed with all the powers he possessed, with the additional power of suspending the opera- tion of a vote for three months, with the right of proposing a dissolution under the form of arranging for a Second Chamber, and with a certainty that the Chamber cannot dissolve itself without giving him and the country two months' notice, during which he will be master of the situation. A more adroit use of his opportunities it would be impossible to conceive, so long as he could not ask the right of dissolution, which would be inconsistent with his theory that the Assembly wields the sovereign power.

But it will be alleged the Thirty need not accept these pro- posals; they are simply the wishes of M. Thiers. Certainly they are, and it is quite possible that the Committee may not accede to them ; but they are sure to debate them at great length—every day being a gain to M. Thiers—are sure to concede something, and are wholly unable, if they do not con- cede enough, to prevent his going down to the Assembly and taking the vote of the whole body with a resignation in his hand, and the right of demonstrating then and there the necessity of dissolution. The Assembly has never yet defeated him in full Session, and is not likely to defeat him now, when he is only asking in the face of the country that dissolution shall be made possible by provision against an interregnum. The country does not care to refuse him the Tribune. The Assembly may, of course, refuse his application, and dismiss him ; but so they can now, and in raising a new subject of debate, M. Thiers evokes no new source of danger. If the Assembly were resolved, it could easily find a pretext for dis- missal; but it is not resolved, and will not be more resolved because M. Thiers concedes in form its main, though use- less demand, a modification of his own unlimited right of appearance in the Tribune, while securing a right to appear when he likes, and pressing his own demand that the contingency of dissolution should be provided for. On the contrary, the mere introduction of that topic, the mere reference to dissolution as inevitable, diminishes the power of the majority, who are only strong while they have no con- stituents either to consult or to fear. The moment a re-election becomes possible, they must think of their seats ; and fighting M. Thiers and the Republic is, as they well know, only the way to lose them. Even their own proposi- tion does not help to save them, for, as they have acknow- ledged, only the Administration can coerce elections, and under their own draft proposal M. Thiers remains master of the Administration. He cannot perhaps do as he likes, but he can stop them from doing as they like, and that is quite sufficient.