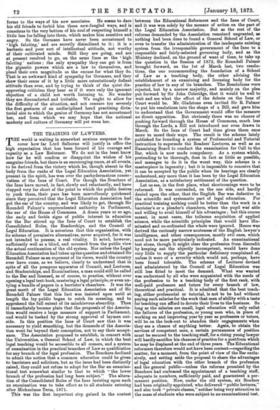 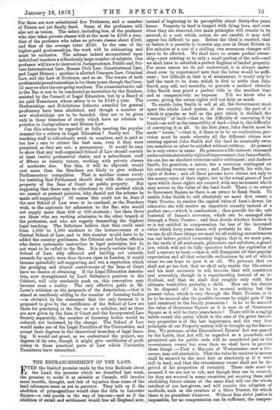 THE TRAINING OF LAWYERS.

THE world is waiting in somewhat anxious suspense to dis- cover how far Lord Selborne will justify in office the high expectation that has been formed of his courage and capacity as a Law Reformer. We do not in the least know how far he will confirm or disappoint the wishes of his sanguine friends, but there is an encouraging omen, at all events, to be derived from the victory which he, though absent in the body from the ranks of the Legal Education Association, yet present in the spirit, has won over the pachydermatous conser- vatism of the Inns of Court. For though the Benchers of the Inns have moved, in fact, slowly and reluctantly, and have stopped very far short of the point to which the public desires to push them, their pace has been marvellously quickened since they perceived that the Legal Education Association had got the ear of the country, and was likely to get, through Sir Roundell Palmer's unprecedented authority in Parliament, the ear of the House of Commons. A dozen years or so ago, the early and feeble signs of public interest in education for the Bar stirred up the Inns of Court to establish the Consolidated Rules, the Readerships, and the Council of Legal Education. It is notorious that this organisation, with its scheme of permissive alternatives, never acquired, for it was not intended to possess, a real vitality. It acted, however, sufficiently well as a blind, and screened from the public view the actual continuation of the old system. Nor unless the Legal Education Association had taken up the question and obtained Sir Roundell Palmer as an exponent of its views, would the country ever have come, as we believe, clearly to understand that in spite of all the pompous apparatus of Council, and Lectures, and Studentships, and Examinations, a man could still be called to the Bar and licensed, as of course, to practise, without ever opening a legal text-book, mastering a legal principle, or even un- tying a bundle of papers in a barrister's chambers. It was the great merit of the Legal Education Association and of Sir Roundell Palmer that this fact was insisted upon until at length the lay public began to catch its meaning, and to apprehend the full extent of its mischievous absurdity. Then it immediately became plain that the proposals of the Associa- tion would receive a large measure of support in Parliament, and would be backed by the strong approval of laymen out- side. In this position the Inns of Court saw that- it was necessary to yield something, but the demands of the Associa- tion went far beyond their conception, not to say their accept- ance. The Association proposed to establish, in concert with the Universities, a General School of Law, in which the best legal teaching would be accessible to all comers, and a system of examination in the practical branches of Law as qualification for any branch of the legal profession. The Benchers declined to admit the notion that a common education could be given to barristers and solicitors, but as the issue had been distinctly raised, they could not refuse to adopt for the Bar an examina- tional test somewhat similar to that to which "the lower branch of the profession had long been subject." The altera- tion of the Consolidated Rules of the Inns insisting upon such an examination was to take effect as to all students entering after Michaelmas Term, 1871.

This was the first important step gained in the contest

between the Educational Reformers and the Inns of Court, and it was won solely by the menace of action on the part of the Legal Education Association. But as the rest of the reforms demanded by the Association remained ungranted, as nothing had been done to found a General School of Law, or even to transfer the administration of the inadequate existing system from the irresponsible government of the Inns to a responsible and fairly-selected governing body, and as the Ministry declined, on the ground of want of time, to take up the question in the Session of 1872, Sir Roundell Palmer brought forward, on the 1st of March last, two resolu- tions, the one recommending the foundation of a School of Law as a teaching body, the other advising the establishment of an examining and licensing body for the practice of law in any of its branches. The Resolutions were rejected, but by a narrow majority, and mainly on the plea put forward by Sir John Coleridge, that it would be well to wait and see what the effect of the debate on the Inns of Court would be. Mr. Gladstone even invited Sir R. Palmer to put his resolutions into the shape of a Bill, and gave him to understand that the Government would offer the measure no direct opposition. But obviously there was no chance of pushing forward through the House of Commons, much less through the Lords, a Bill not introduced nor even drawn in March. So the Inns of Court had time given them once more to mend their ways. The result is the scheme lately published for founding a system of Professorial and Tutorial instruction to supersede the Readers' Lectures, as well as an Examining Board to conduct the examination for Call to the Bar, which is now made compulsory. As a system which, pretending to be thorough, does in fact as little as possible, and manages to do it in the worst way, this scheme is a masterpiece in ingenuity ; but it is impossible to conceive that it can be accepted by the public when its bearings are clearly understood, any more than it has been by the Legal Education Association, as a satisfactory settlement of the question.