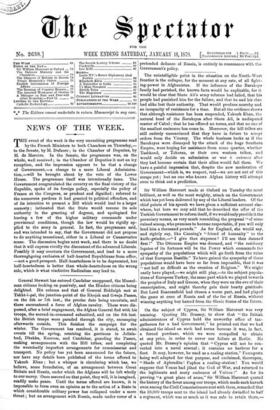 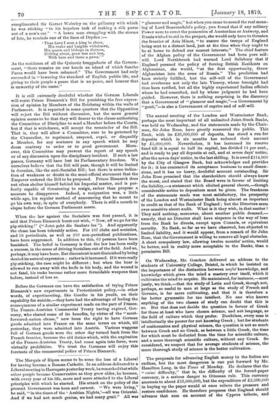 Page 1, 18 January 1879 — On the subject of Cyprus, Sir William Harcourt was very
Close

On the subject of Cyprus, Sir William Harcourt was very

amusing. Quoting Mr. Brassey, to show that " the British administrators of Cyprus hold the unworthy office of tax- gatherers for a bad Government," he pointed out that we had obtained the island on such bad terms because it was, in fact, a forced purchase, which we were compelled to obtain at any price, in order to cover our failure at Berlin. He quoted Mr. Brassey's opinion that " Cyprus will not be con- verted into a naval arsenal ; it contains no harbour for a fleet. It may, however, be used as a coaling station," Famagosta being well adapted for that purpose, and exclaimed, thereupon, " Shade of Aphrodite ! Paphos a coaling-station ! You would suppose that Venus had jilted the God of War, and returned to the legitimate and sooty embraces of Vulcan !" As for its proving "a great place of arms," Sir William Harcourt quoted the history of the fever among our troops, which made such havock even among the Civil Commissioners sent with them, remarked that the 10,000 troops sent to the island had already dwindled to half a regiment, which was as much as it was safe to retain there,—

complimented Sir Garnet Wolseley on the gallantry with which he was sticking "to his hopeless task of making a silk purse out of a sow's ear." " A brave man struggling with the storms of fate, he reminds one of the lines of Dryden :—

Thus have I seen a king in chess, His rooks and knights withdrawn, His queen and bishops in distress, Shifting about, grow less and less, With here and there a pawn.'"

As the residuum of all the Quixotic braggadocio of the Govern- ment, "there remains on our hands an island of which Sancho Panza would have been ashamed." The Government bad only succeeded in " lowering the standard of English public life, and giving to their people a peace that is no peace, and honour that is unworthy of the name."