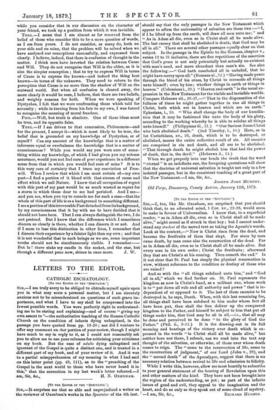 [TO THE EDITOR OF TEE "SPECTATOR."]

And so with the " all things subdued unto him," and " God all in all," which we find farther on. St. Paul represents the kingdom as now in Christ's hand, as a militant one, whose work is to " put down all rule and all authority and power " that is in- dependent of or opposed to it. The last of these enemies to be destroyed is, he says, Death. When, with this last remaining foe, all things shall have been subdued to him under whose feet all have been put, then shall the Son deliver up the conquered kingdom to the Father, and himself be subject to him that put all things under him, that God may be all in all,—i.e., that all may be done and perceived to be done " to the glory of God the Father." (Phil. ii., 9-11.) It is the drawing-out in its full meaning and bearings of the victory over death which is ex- pressed in the words " in Christ shall all be made alive," but neither here nor there, I submit, can we read into the text any thought of the salvation, or otherwise, of those over whom death ceases to reign. The " some to the resurrection of life, some to the resurrection of judgment," of our Lord (John v., 29), and the " second death " of the Apocalypse, suggest that there is no necessary relation between revival to life and admission to felicity.

While I write this, however, allow me most heartily to subscribe to your general statement of the bearing of Revelation upon this and other matters of the kind. They have not been brought into the region of the understanding, as yet ; as part of the infinite issues of good and evil, they appeal to the imagination and the heart, and do so only as they speak out of some cloud of mystery.