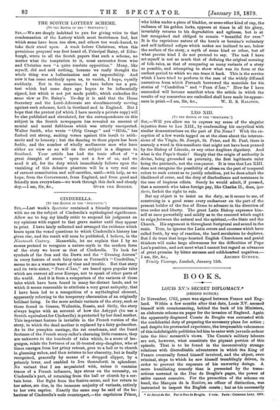 [TO THE EDITOR OF THE SPECTATOR."1

Sin,—Last week's Spectator contained a friendly remonstrance with me on the subject of Cinderella's mythological significance. Allow me to beg my kindly critic to suspend his judgment on my opinions with regard to that grave matter until they appear in print. I have lately collected and arranged the evidence which bears upon the vexed questions to which Cinderella's history has given rise, and the result will soon be published, I believe, in the Nineteenth Century. Meanwhile, let me explain that I by no means pretend to recognise a nature-myth in the modern form of the story we know as that of Cinderella. To look for symbols of the Sun and the Dawn and the " Evening Aurora" in every feature of such fairy-tales as Perrault's " Cendrillon," seems to me a wanton waste of time and trouble. But that story and its twin-sister, " Peau d'Ane," are based upon popular tales which are current all over Europe, not to speak of other parts of the world. And it is from a comparison of the variants of those tales which have been found in many far-distant lands, and to which it seems reasonable to attribute a very great antiquity, that I have been led to a recognition of a mythological element, apparently referring to the temporary obscuration of an originally brilliant being. In the more archaic variants of the story, such as those found in Greece, Wallachia, Russia, and Sicily, the story always begins with an account of how the Ashypet (to use a Scotch equivalent for Cinderella) is protected by her dead mother. This important feature is invisible in the French version of the story, in which the dead mother is replaced by a fairy godmother. As to the pumpkin carriage, the rat coachman, and the lizard footmen of the French story-teller's charming little romance, they are unknown to the hundreds of tales which, in a score of lan- guages, relate the fortunes of an ill-treated step-daughter, who at times emerges from her grimy retreat, goes to a ball or to church in gleaming robes, and then returns to her obscurity, but is finally recognised, generally by means of a dropped slipper, by a princely lover, and enabled to live thenceforth in splendour. No variant that I am acquainted with, unless it contains traces of a French influence, lays stress on the necessity, on Cinderella's part, of returning from the ball or church by a cer- tain hour. Her flight from the festive-scene, and her return to her ashes, are due, in the immense majority of variants, entirely to her own caprice. Exactly the same may be said of the be- haviour of Cinderella's male counterpart,—the capricious Prince, who hides under a piece of bladder, or some other kind of cap, the radiance of his golden locks, appears at times in all his glory, invariably returns to his degradation and ugliness, but is at last recognised and obliged to remain " beautiful for ever.' It is the capricious nature of the hero's or heroine's voluntary and self-inflicted eclipse which makes me inclined to see, below- the surface of the story, a myth of some kind or other, but of what precise kind I do not pretend to say. The task I have set myself is not so much that of defining the original meaning of folk-tales, as that of comparing as many variants of a story as possible, and attempting to show what was its form at the- earliest period to which we can trace it back. This is the service- which I have tried to perform in the case of the widely diffused narratives from which Perrault borrowed the materials for his. stories of " Cendrillon " and " Peau d'Ane." How far I have succeeded will become manifest when the article in which the results of my researches are embodied shall have made its appear-