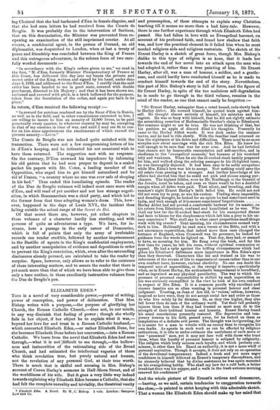 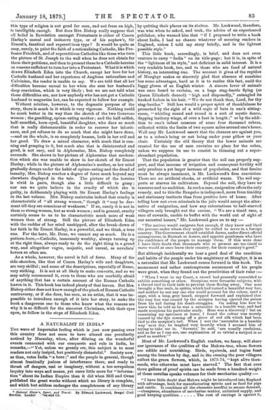 them, when the loyalty of personal honour is eclipsed by religiosity. The religion which truly secures such loyalty, and which perfects con-

science, is other than his. Based on authority, it is not a mere whiff of personal aspiration. Though it accepts, it does not rely on co-operation of the devotional temperament. Indeed a fresh and yet more eager confidence in himself followed on Ernest's temporary discomfiture, and. he sincerely believed that by divine assistance he was again mounted on his evangelising bobby. Who shall say how far a cold bath, a better breakfast than was his supper, and a walk in the fresh autumn morning renewed his confidence ?"

And the whole picture of Sir Ernest's actions and demeanour, —barring, as we said, certain tendencies to exaggeration towards the close,—is painted in strict keeping with this admirable sketch. That a woman like Elizabeth Eden should make up her mind that

this type of religion is not good for man, and not from on high, is intelligible enough. But does Mrs. Bishop really suppose that all belief in Revelation amongst Protestants is either of Canon Harlay's unreal and insincere type, or of his nephew's, Sir Ernest's, fanatical and superstitious type? It would be quite as easy, surely, to paint the faith of a rationalising Catholic, like Pro- fessor Friedrich, and of superstitious Catholics like those who turn the picture of St. Joseph to the wall when he does not obtain for them their petitions, and then to present these to a Catholic heroine as reasons sufficient to turn her into a Protestant. Whatit is which draws Elizabeth Eden into the Church, except her love for her Catholic husband and her experience of Anglican rationalism and Calvinism, the reader is unable to say. We are told that all her difficulties become unreal to her when she sees her husband's deep conviction, which is very likely ; but we are not told what those difficulties are, nor how anybody who has not got a Catholic husband to magnetise her, can be expected to follow her example.

Without relation, however, to the dogmatic purpose of the story, there is much in it which is very vigorous. Nothing could be much better in its way than the sketch of the two Genevese women ; the gambling, opium-eating mother ; and the half-selfish, half-unselfish, keen-eyed, beautiful daughter, who does so much that is really dishonourable in order to recover her inherit- ance, and yet refuses to do so much that she might have done, —and on the whole, is so completely human, both in her evil and her good. To draw a mixed character, with much that is cun- ning and grasping in it, but much also that is disinterested and good, is not easy, and in Alphonsine, Mrs. Bishop completely succeeds. She shows in her picture of Alphonsine that modera- tion which she was unable to show in her sketch of Sir Ernest Harlay; while in the picture of Alphonsine's mother, as her mind gradually decays under the habit of opium-eating and the dread of insanity, Mrs. Bishop reaches a degree of force much beyond any elsewhere displayed in the tale. The picture of the heroine is vivid in parts, though also a little difficult to grasp ; nor can we quite believe in the cruelty of which she is guilty, in deliberately playing with Sir Ernest Harlay's feelings in the last volume. Mrs. Bishop maintains indeed that cruelty is characteristic of "all strong women," though it "may be dor- mant till they are conscious of weakness." If so, surely it is not in them as strong women, but as weak women ; and in general, cruelty certainly seems to us to be characteristic much more of weak women than of strong. Still the picture of Elizabeth Eden with the rudder of her mind unshipped, after the break-down of her faith in Sir Ernest Harlay, is a powerful, and we think, a true one. For the hero, Mr. Dene, we cannot say as much. He is a pattern-hero,—Catholic, immensely wealthy, always turning up at the right time, always ready to do the right thing in a grand way, and altogether vague, majestic, and unreal, as novelists' heroes so often are.

As a whole, however, the novel is full of force. Many of the side-sketches, like that of Canon Harlay's wife and daughters, are very skilful ; and some of the descriptions, especially of Rome, very striking. It is not at all likely to make converts, and so we may safely recommend it, even to those who are morbidly afraid of anything that has a certain amount of the Roman Catholic leaven in it. This book has indeed plenty of that leaven. But Mrs. Bishop either does not know enough of the pinch of Roman Catholic controversy, or if she does, has seen, as an artist, that it was im- possible to introduce enough of it into her story, to make the book a dangerous one to those who know what the reasons are why it is so difficult for the sincerest Christians, with their eyes open, to follow in the steps of Elizabeth Eden.