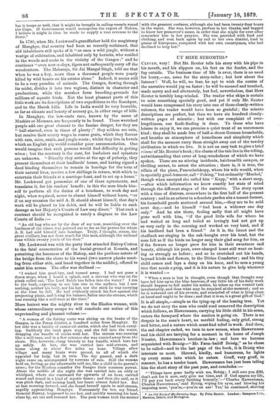 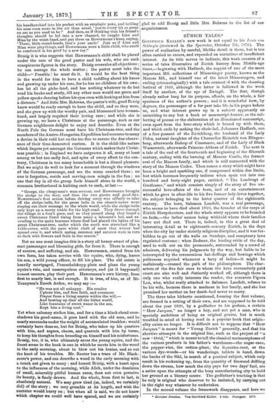 CLEVER, very ! But Mr. Reuter tells his story with his pipe in

his mouth, and his slippers on, his feet on the fender, and the fog outside. The business time of life is over, there is no need for hurry,—no, none for the story-teller ; but how about the listener? Well, he will, we fear, be apt to wish the course of

the narrative would jog on faster ; he will be amused and touched, made merry and sad alternately, but feel, nevertheless, that Herr Reuter is terribly long-winded. The reader who skips is certain to miss something specially good, and yet if only Mr. Reuter

would have compressed his story into one of these closely-written volumes, the reader would have been so grateful ; the minute descriptions are perfect, but then we have six hundred closely- written pages of minutim ; but with our complaint of over- lengthiness, our fault-finding is done. To those who have leisure to enjoy it, we can promise a quiet treat of an uncommon kind ; they shall be made free of half-a-dozen German households, and breathe an atmosphere of homeliness and simplicity which

shall for the moment carry them straight away out of the tawdry civilisation in which we live, It is not an easy task to give a brief résumé of Mr. Reuter's book ; the charm of the tale lies in the telling,

notwithstanding that error of long-windedness of which we have spoken. There are no stirring incidents, hairbreadth escapes, or thrilling scenes, to arrest the attention ; there is, it is true, the villain of the piece, Pomuchelskopp, whom his wife would, when in specially good-humour, call " Poking," but ordinarily "Muchel,' though when annoyed she called him " Kopp," with a short snap, —after which information we know exactly her state of mind through the different stages of the narrative. The story opens with a time of distress, somewhere in the first half of the present century ; and in an arbour in a desolate garden sits a tenant-farmer,

his household goods scattered around him,—they are to be sold next day,—and he himself " had been a widower one day only." And he sits there, feeling sadly that all might have gone well with him, "if the good little wife for whom he had waited so long and toiled so lovingly had not got up so very early in the morning and worked so very hard, and if his landlord had been a friend." As it is, the linnet and the chaffinch are singing in the oak-boughs over his head, but the

man felt as if the birds no longer sang their glad song for him, as if the flowers no longer grew for him in their sweetness and beauty, although his poor, over-charged heart still went on beat- ing as strongly as before ; and so he stretched out his hands, beyond birds and flowers, to the Divine Comforter ; and his tiny child comes and lays a daisy on his knee, and he sees a young tree that needs a prop, and it is his nature to give help wherever it is wanted :—

" When a man is lost in thought, even though that thought may have led him up to the blue heavens, if any little bit of his daily work should happen to fall under his notice, he takes up the wonted task involuntarily, and does what may be required at the moment ; and so he is wakened out of his reverie, and reminded of what is lying close at hand and ought to be done ; and that it is so, is a great gift of God."

It is all simple,—simple as the tying-up of the leaning tree. Yet we do not envy the man who could read unmoved the description which follows, as Hawermann, carrying his little child in his arms, enters the farmyard where the auction is going on. There is no despair in the man's heart, no morbid feeling, only grief, strong and bitter, and a nature which must find relief in work. And then, the sad chapter ended, we turn to new scenes, when Hawermann and his child are tarrying for a moment in the home of Joseph

Niissler, Hawermann's brother-in-law ; and here we become acquainted with Briisig—" Mr. Farm-bailiff Briisig," as he chose to be called—and to the last page of the book, it is Briisig who interests us most. Shrewd, kindly, and humorous, he lights up every scene into which he enters. Gruff, very gruff, in manner, he has a tender heart. Hawermann has just been telling him the short story of the past year, and concludes :—

" e Things have gone badly with me, Briisig ; I still owe you £30, don't ask for it now, only give me time, and if God spares my life, I'll pay you back every farthing honestly.'—' Charles Hawermann, Charles Hawermann,' said Briisig, wiping his eyes, and blowing his imposing nose, 'you're,—you're an ass ! Yes,' he continued, shoving • An Old Story of My Farming Days. By Fritz Reuter. London : Sampson Marston, Searle, and Rivington.

his handkerchief into his pocket with an emphatic poke, and holding his nose even more in the air than usual, you're every bit as great an ass as you used to be !' And then, as if thinking that his friend's thoughts should be led into a new channel, he caught Lina and Mina by the waist-band, and put them on Hawermann's knee, saying, There, little round-heads, that's your uncle.' Just as if Lino, and Mina were playthings, and Hawermann were a little child, who could be comforted in his grief by a new toy."

Brasig it is who suggests that Hawermann's child shall be placed under the care of the good pastor and his wife, who are such conspicuous figures in the story. Brasig overrules all objections ; be can manage the whole matter ; the pastor must take the child—" Possible ! he must do it. It would be the best thing in the world for him to have a child toddling about his knees

and growing up under his care, for he has no children of his own ; has let all the glebe-land, and has nothing whatever to do but read his books and study, till any other man would see green and yellow specks dancing before his eyes even with looking at him from a distance." And little Mrs. Behrens, the pastor's wife, good Brasig knew would be ready enough to have the child, and so they were, and she grew up with the worthy pair, and blossomed into woman- hood, and largely requited their loving care ; and while she is growing up, we have a Christmas at the parsonage, such as our German neighbours delight to enjoy and describe. Even at the North Pole the German must have his Christmas-tree, and the members of the Austro-Hungarian Expedition had recourse to many a device in their cold but on the ice-floe to secure the due observ- ance of their time-honoured custom. It is the child-like nature which lingers yet amongst the Germans which makes their Christ- mas possible ; in England we have outgrown it all, many at least among us but too sadly feel, and spite of every effort to the con- trary, Christmas in too many households is but a dismal pleasure. But we might do well to look for a moment through the windows

of the German parsonage, and see the scene enacted there ; no One is forgotten, maids and serving-men mingle in the fun ; no one that day in all the group feels himself alone in the world, a

common brotherhood is knitting each to each, at last :—

" George, the clergyman's man-servant, and Hawermann brought the sledge to the door, and then the two guests said good-bye. Hawermann's first action before driving away was silently to take off the sledge-bells, for the great bells in the church-tower were ringing out their message to the whole world, while the sledge-bells only kept up a merry tinkle for the high-road. They drove through the village at a foot's pace, and as they passed along they heard a sweet Christmas Carol rising from many a labourer's hut, and as- cending to the quiet heavens where God had placed the lights of his great Christmas-tree, under which the earth was stretched like a table-cover, with the pure white cloth of snow that winter had spread over it, and which spring, summer, and autumn were in turn to deck with flowers and fruit in due season."

But no one must imagine this is a story all honey-sweet of plea- sant parsonages and blooming girls, far from it. There is enough of sorrow, and suffering, and sin. Hawermann, ousted from his own farm, has taken service with the squire, who, dying, leaves his son, a wild young officer, to fill his place. The old estate is heavily mortgaged, Pomuchelskopp plots and plans the young squire's ruin, and unscrupulous attorneys, and (as it happened) honest usurers, play their part. Hawermann's own history, from first to nearly last, is sad enough. It is true, of him, as of Mr. Tennyson's Enoch Arden, we may say :-

"He was not all unhappy. His resolve Upbore him, and firm faith, and evermore Prayer from a living source within the And beating up thro' all the bitter world, Like fountains of sweet water in the sea, Kept him a living soul."

Yet when calumny strikes him, and for a time a black cloud over- shadows his good-name, it goes hard with the old man, and he nearly succumbs under the weight of accumulated troubles ; would certainly have done so, but for Brasig, who takes up his quarters with him, and argues, cheers, and quarrels with him by turns, to keep his thoughts from brooding on himself and his misfortunes. Brirsig, too, it is, who ultimately saves the young squire, and the finest scene in the book is one in which he meets him in the wood in the early morning, about to blow out his brains, and so cut the knot of his troubles. Mr. Renter has a trace of Mr. Black- more's power, and can describe a wood in the early morning with a touch not given to many ; and honest Briisig, with a heart open to the influences of the morning, while Alick, under the dominion of small, miserably pitiful human cares, does not even perceive its beauty, is finely drawn. And the whole, from first to last, is absolutely natural. We may grow tired (as, indeed, we certainly did) of the story ; we may grumble at its length, and wish the narrator would hurry on ; but when all is said, we do not know which chapter we could well have spared, and we are certainly

glad to add Briisig and little Mrs. Behrens to the list of our acquaintances.