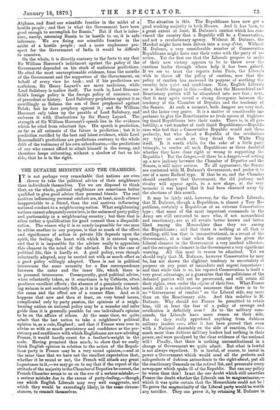 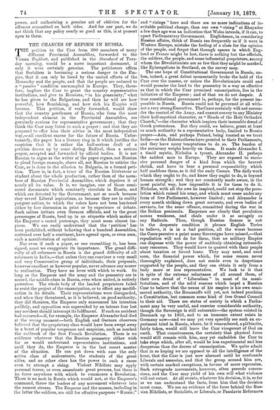 THE DUFAURE MINISTRY AND THE CHAMBERS.

IT is not perhaps very remarkable that nations are even slower to take the political advice of their neighbours than individuals themselves. Yet we are disposed to think that, on the whole, political neighbours are sometimes better qualified to give good advice than personal friends. The real motives influencing personal conduct are, at least, much oftener inappreciable to a friend, than the real motives influencing national conduct to a neighbouring nation. What neighbouring nations cannot adequately enter into, is the animus of party policy and partisanship in a neighbouring country ; but then that is often rather a qualification for good counsel than a disqualifi- cation. The reason why it is so nearly impossible for one man to advise another to any purpose, is that so much of the effect and significance of action in private life depends upon the spirit, the feeling, the heart with which it is entered upon, and that it is impossible for the adviser really to appreciate this element in the mind of the advised. But in the case of political life, this is hardly so. A good policy, even though reluctantly adopted, may be carried out with as much effect as a good policy willingly adopted. There is not in political intercourse the same necessity for a fine correspondence between the outer and the inner life, which there is in personal intercourse. Consequently, good political advice, when reluctantly taken, as it sometimes is by Cabinets, often produces excellent effects ; the absence of a genuinely consent- ing animus is not seriously felt, as it is in private life, for both the cause and the effect are of a coarser fibre. And so it happens that now and then at least, on very broad issues, complicated only by party passion, the opinions of a neigh- bouring nation on national policy may be a sounder and safer guide than it is generally possible for one individual's opinion to be on the affairs of others. At the same time, we quite admit that the last nation to take a neighbour's political opinion is, as a rule, England ; and that if France were ever to advise us with as much persistency and confidence as the per- sistency and confidence with which Englishmen are now advising France, it would hardly count for a feather's-weight in the scale. Having premised thus much, to show that we really think English opinion in relation to the action of the Repub- lican party in France may be a very sound opinion,—and at the same time that we have not the smallest expectation that, whether it be sound or not, the French will attach any great importance to it,—we may go on to say that if the report of the attitude of the majority in the Chamber of Deputies be correct, the French Chamber seems to us on the eve of a serious mistake,— a serious mistake due to the excess of party-feeling,—though one which English Liberals may very well exaggerate, and which they would be exceedingly likely, in the same circum- stances, to commit themselves. The situation is this. The Republicans have now got a good working majority in both Houses. And it has been, to a great extent at least, 111. Dufaure's caution which has con- vinced the country that a Republic will be a Conservative, and not a revolutionary agency. Without M. Dufaure, the Marshal might have been driven into a coup (Mat. Without M. Dufaure, a very considerable number of Conservative Republicans might have cast their votes with the party of re- action. Yet the first use that the Liberals propose to make of their new victory appears to be to throw over the cautious leader through whose help it has been gained. If we are to trust the reports from Paris, the Liberals wish to throw off the policy of caution, now that the policy of caution has answered its purpose of soothing the country into quiet and confidence. Now, English Liberals see a double danger in this :—first, that the Monarchical and Reactionary parties will be stimulated into new fear ; next, that it may again reveal a strong divergence between the tendency of the Chamber of Deputies and the tendency of the Senate. At such a moment, both dangers are very real, and the latter very grave. It is a matter of considerable im- portance to give the Reactionaries no fresh means of frighten- ing timid Republicans into their ranks. There is, in all pro- bability, a vast number of such timid Republicans,—Republi- cans who feel that a Conservative Republic would suit them perfectly, but who dread a Republic of the revolution- ary type as much as they dread the White Flag itself. Is it worth while, for the sake of a little party triumph, to render all such Republicans as these doubtful whether they have done right or wrong in supporting the Republic ? But the danger,—if there be a danger,—of setting up a new jealousy between the Chamber of Deputies and the Senate, is still more serious. To all appearance, the Senate are contented with M. Dufaure's Government, and prefer it to one of a more Radical type. If that be so, and the Chamber should overthrow that Government, the old jealousy and rivalry will appear again, in a new shape, at the very moment it was hoped that it had been charmed away by the elections of this month.

It may be fairly said, however, for the French Liberals, that M. Dufaure, though a Republican, is almost a Tory Re- publican, certainly a Republican of an extreme Conservative type ; that some of the most important commands in the Army are still entrusted to men who, if not monarchical and reactionary, are at all events better known and better liked among the Monarchists than they are among the Republicans ; and that there is nothing at all that is startling, still less that is unconstitutional, in a recast of the Government, at a time when the country has given the Liberal element in the Government a very marked adhesion, and the retrograde element in the Government a very significant warning. All this must in reason be admitted. Yet we should reply that M. Dufaure, however Conservative he may be, has not shown the slightest tendency to uncertainty of purpose on any point of immediate and urgent importance ; and that while this is so, his reputed Conservatism is itself a very great advantage, as a guarantee that the politicians of the defeated parties will not be persecuted, and will retain all their rights, even under the regime of their foes. What France needs still is a sedative,—an assurance that there is to be no " Government of combat " on the Liberal side, any more than on the Reactionary side. And this sedative is M. Dufaure. Why should not France be permitted to retain him, till at least the fear of a policy of revenge and retribution is definitely over ? As to the military com- mands, the Liberals have more reason on their side. But do they really apprehend anything from dubious military leaders now, after it has been proved that even with a National Assembly on the side of reaction, the then much more than dubious military leaders had nothing in their power, and were paralysed by the clear evidence of the national will ? Finally, that there is nothing unconstitutional in a change of Government we quite admit. But what is lawful is not always expedient. It is lawful, of course, to instal in power a Government which would send all the prefects and sub-prefects of dubious antecedents to the right-about, put all the reactionary Generals on the retired list, and prosecute every newspaper which spoke ill of the Republic. But can any policy be worse than this ? Is not the one doubt which still unsettles France the doubt whether the Liberals can be magnanimous,— which it was quite certain that the Monarchists could not be ? To prove the magnanimity of the Liberal party would be worth any sacrifice. They can prove it, by retaining M. Dufaure in power, and authorising a genuine act of oblivion for the offences committed on both sides. And for our part, we do not think that any policy nearly so good as this, is at present open to them.