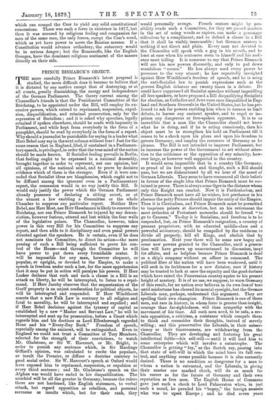 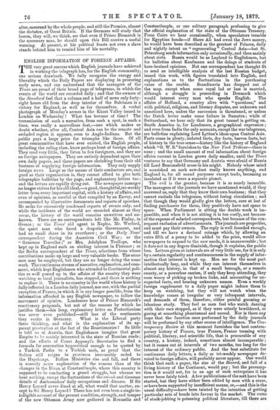 THE more carefully Prince Bismarck's latest proposal is studied, the more difficult does it become to believe that it is dictated by any motive except that of destroying, or at all events, greatly diminishing, the energy and independence of the German Parliament. The theory current among the Chancellor's friends is that the Punishment Committee of the Reichstag, to be appointed under the Bill, will employ its ex- cessive powers, which extend to reprimand, suspension, expul- sion, disqualification, and criminal prosecution, only for the repression of Socialism ; and it is asked why speeches, legally criminal if spoken elsewhere, should be made with impunity in Parliament, and while kept from everybody in the form of a pamphlet, should be read by everybody in the form of a report. Why should a journalist be punishable for saying in a leader what Herr Bebel may say in the next column without fear? Just for the same reason that in England, libel, if contained in a Parliamen- tary speech, is privileged, in order that the true mind of the nation should be made known. If Socialist feeling prevails in Berlin, that feeling ought to be expressed in a national Assembly, brought together in order to represent, not one opinion, but all opinions, of the national mind, and to prove by decisive evidence which of them is the stronger. Even if it were con- ceded that Socialist ideas are blasphemies, which ought not to be diffused among the ignorant even in a Parliamentary report, the concession would in no way justify this Bill. It would only justify the power which the German Parliament already possesses of declaring a sitting secret, or at the utmost a law enabling a Committee or the whole Chamber to suppress any particular report. Neither Herr Bebel, nor Herr Most, nor Herr Haselmann is likely to convert the Reichstag, nor can Prince Bismarck be injured by any denun- ciation, however furious, uttered and lost within the four walls of the legislative palace. The Chancellor, however, takes power in this very Bill for his Committee to suppress any report, and then adds to it disciplinary and even penal powers directed against the speakers. He is certain, even if he does not nominate the Committee, to direct its action—the mere passing of such a Bill being sufficient to prove his con- trol of the House—and through the Committee he will have power to put down every formidable orator. It will be impossible for any man, however eloquent, or popular, or upright, or devoted to the Empire, to make a speech in freedom under such a law, for the mere apprehension that it may be put in action will paralyse his powers. If Herr Lasker declares that such and such a clause in a Bill is an attack on liberty, he will be interrupted, to listen to a repri- mand. If Hen Jacoby observes that the sequestration of the Guelf property is an unjust confiscation for political objects, he will be interrupted and suspended. If Herr Windthorst asserts that a new Falk Law is contrary to all religion and fatal to morality, he will be interrupted and expelled ; and if Herr Bebel declaims against the tyranny of capital as established by a new " Master and Servant Law," he will be interrupted and sent up for prosecution, before a Court which regards him and his doctines as Lord Ellenborough regarded Hone and his " Every-Day Book." Freedom of speech, especially among the eminent, will be extinguished. Even in England we could not trust a Committee of Tory Members, selected for the strength of their convictions, to watch Mr. Gladstone, or Sir W. Harcourt, or Mr. Bright, in order to punish any sentence which, in Sir Hardinge Giffard's opinion, was calculated to excite the populace, or insult the Premier, or diffuse a doctrine contrary to good social order. Sir W. Harcourt's speech at Oxford would have exposed him to reprimand, suspension, or expulsion at every third sentence ; and Mr. Gladstone's speech on the Afghan war would have ended in his disqualification. The mischief will be all the greater in Germany, because the rulers there are not hardened, like English statesmen, to verbal attack, but regard opposition as rebellion, and personal sarcasms as insults which, but for their rank, they

would personally avenge. French orators might by pos- sibility evade such a Committee, for they are passed masters in the art of using words as rapiers, can make a personage ridiculous by a compliment, and so defend a clause in a Bill that it shall be visibly inexcusable ; but German oratory is nothing if not direct and plain. Every man not devoted to the Chancellor will speak with a gag in his mouth, and be least at ease when his sentences seem to himself and his audi- ence most telling. It is nonsense to say that Prince Bismarck will use his new powers discreetly, and only to put down scandalous "scenes." He has always used every power he possesses to the very utmost ; he has repeatedly inveighed against Herr Windthorst's freedom of speech, and he is using the anti-Socialist law to punish expressions such as the gravest English debaters use twenty times in a debate. He could have suppressed all Socialist speeches without imperilling all free speakers, or have proposed a Bill disqualifying Socialists for election, as Catholics and Jews were once disqualified in Eng- land and Southern Generals in the United States, but he has pre- ferred to ask for powers enabling him when in earnest to limit debate, to harass any eminent speaker, and to expel or im- prison any dangerous or free-spoken opponent. It is to us incredible that a man like the Chancellor should not know what he is doing, and if he is acting consciously, then his object must be to strengthen his hold on Parliament till it ceases to be a check upon his plans and upon his freedom to govern Germany, and employ the resources of Germany as he pleases. The Bill is not intended to improve Parliament, but to increase the power of the Government to act without atten- tion to the criticisms or the opposition of any minority, how- ever large, or however well supported in the country.

It would seem impossible that in a country like Germany, so proud of its free speech and thought, such a Bill should pass, but we are disheartened by all we hear of the mood of German Liberals. They seem to have renounced all their beliefs in favour of the single idea that Prince Bismarck must be sus- tained in power. There is always some Ogre in the distance whom only this Knight can combat. Now it is Particularism, and Prince Bismarck must have all he wishes, lest perchance in his absence the petty Princes should impair the unity of the Empire. Then it is Clericalism, and Prince Bismarck must be permitted to imprison priests at discretion, lest on his retirement the most orthodox of Protestant monarchs should be forced "to go to Canossa." To-day it is Socialism, and freedom is to be suspended, lest, on Prince Bismarck's resignation, a country of peasant proprietors, with an educated middle-class and a powerful aristocracy, should be compelled by the residuum to divide all property, kill all Kings, and abolish God by proclamation. Next year there will be some new bogey and some new powers granted to the Chancellor, until a genera- tion will have grown up unaccustomed to discussion, inept• for affairs, and as helpless because Prince Bismarck is dead as a ship's company without an officer in command. The political fibre of the nation will have been weakened, until it will seek in its feebleness for a new dictator, sure if history may be trusted to lack at once the capacity and the good-fortune which have raised the Pomeranian country squire to his present height of mastery. It is of no use, we suppose, to warn Germany of this result, for no nation ever believes in its own loss of -tone until misfortune has cleared its mental eyesight, but the German Liberals may, perhaps, understand this argument. They are spoiling their own champion. Prince Bismarck is one of those men, not rare in history, in whom force is greater than insight, courage than far-sightedness, will than sympathy with the movement of his time. All such men need, to be safe, a cer- tain opposition, a criticism, a resistance which compels them to think and reconsider their thoughts, instead of merely willing ; and this preservative the Liberals, in their subser- viency or their timorousness, are withdrawing from the Chancellor. They are developing and fostering his great intellectual foible—his self-will — until it will lead him to some enterprise which will involve a catastrophe. The Chancellor is getting " fey," as the Scotch say, passing into that state of self-will in which the mind loses its full con- trol, and anything seems possible because it is also earnestly desired. There is no condition so dangerous for a man to whom a nation is entrusted, and the Liberals, in giving their master one marked check, will do as much for his career as for the future of Germany and their own reputation as free men. The English House of Commons gave just such a check to Lord Palmerston when, in just such a mood, he paraded his "bogey," the foreign assassin who was to upset Europe ; and he died seven years after, mourned by.the whole people, and still the Premier, almost the dictator, of Great Britain. If the Germans will study that lesson, they will, we think, see that even if Prince Bismarck is the necessary man, he should upon this Bill receive a useful warning. At present, at his political feasts not even a slave stands behind him to remind him of his mortality.