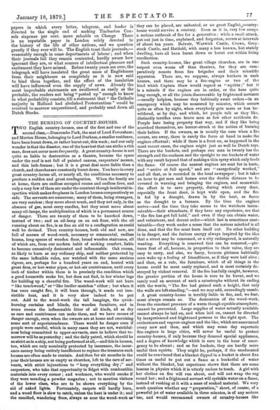 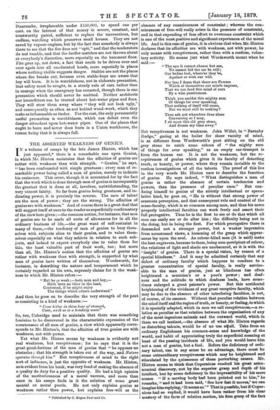 THE BURNING OF COUNTRY-HOUSES.

TWO English country-houses, one of the first and one of the second class,—Duncombe Park, the seat of Lord Feversham ; and Morton House, belonging to Lord Durham, a smaller residence, have been burnt down, or rather burnt out, this week ; and our only wonder is that the disaster, one of the heaviest that can strike a rich man, does not occur more frequently. A great country-house is not quite so liable to destruction as a theatre, because the space under the roof is not full of painted canvas, carpenters' messes, and thin lath-frames ; but it is a great deal more liable than a church, and churches are constantly burnt down. You have in every great country-house all, or nearly all, the conditions necessary to produce a sudden and great conflagration. When the family are at home, there are endless occupied rooms and endless fires, and only a very few of them are under the constant though incidental in- spection which makes fireplaces in London houses comparatively so safe. The servants are numerous ; many of them, being strangers, are very careless ; they move about much, and they not only, in the absence of gas, must carry candles, but they must move about many oil-lamps, the multiplication of which is a permanent source of danger. There are twenty of them to be knocked down, instead of two ; and an oil-lamp on an oak floor, with the oil running about on fire, is as fine an aid to a conflagration as could well be devised. Then country-houses, both old and new, are full of masses of wood-work, necessary or ornamental, endless beams, long spaces of wooden floor, broad wooden staircases, all of which are, from our modern habit of seeking comfort, liable to become excessively desiccated and inflammable. Oak rooms, as likely to burn as any ordinary ship, and neither protected by the same inflexible rules, nor watched with the same anxious rigour, are, perhaps for a hundred years on end, heated with great fires, or hot-water pipes, or hot-air contrivances, until every inch of timber within them is in precisely the condition which a good housewife seeks for, but does not find, in her winter logs for building up a cheerful fire. The wood-work will not burn " like touchwood," or "like lucifer-matches " either ; but when it has once caught fire, it will burn through, it sends out irre- sistible heat, and it is very slow indeed to be put out. Add to the wood-work the tall hangings, the quick- burning curtains and blinds, the wooden furniture, and in some rooms the inflammable litter of all kinds, all as dry as care and contrivance can make them, and we have causes of danger enough, even when the owners are at home and exercising some sort of superintendence. There would be danger even if people were careful, which in many cases they are not, watchful- ness being committed to upper-servants, sure to believe that to- morrow will be as yesterday ; and the daily patrol, which should be as strict as in a ship, not being performed at all,—and this in houses, too, which are only nominally protected by insurance, the insur- ance-money being entirely insufficient to replace the treasures such houses are often made to contain. And then for six months in the year their houses are as empty as churches, lift to the care of ser- vants, with strict injunctions to " keep everything dry ;" and carpenters, who take that opportunity to fidget with combustible materials into every corner ; and workmen, who would smoke if they were mending a powder magazine ; not to mention visitors of the lower class, who are to be shown everything by the aid of naked lights. Fortunately, carpets will hardly burn, and a wood floor is slow to catch, unless the heat is under it; and the ramified, wandering flues, always as near the wood-work as they can be placed, are unheated, or no great Englishecountry- house would survive a century. Even as it is, very few escape a serious outbreak of fire for a generation ; while a small attack, put out just in time, explained, and forgotten, recurs at intervals of about ten years. Belvoir, Warwick Castle, Crewe, Grey- stock Castle, and Hatfield, with many a less known, but stately dwelling, have all been burnt down or burnt out within living recollection.

Such country-houses, like great village churches, are in one respect even worse off than theatres, for they are com- paratively remote from fire brigades and their scientific apparatus. There are, we suppose, always buckets in such houses, and there may be a fire-engine or two of the kind which Captain Shaw would regard as " squirts ;" but it is a miracle if the engines are in order, or the hose quite long enough, or all the joints discoverable by frightened servants —usually helpless, because they habitually await orders —in an emergency which may be measured by minutes, which occurs quite as often by night, when everybody gets more or less be- wildered, as by day, and which, let people talk as they like, distinctly terrifies even brave men as few other accidents do. People hate losing property that way, and if they like being scorched themselves, are horror-struck at the notion of burning their babies. If the owners, as is usually the case when a fire occurs, are away, there is rarely the force at hand to make the engines effectual ; while if there is a frost on, as happened in the most recent cases, the engines might just as well be Dutch toys. There are the buckets, and perhaps one man in twenty has the strength and the coolness and the eyesight to use buckets of water with any result beyond that of maldng a thin spray which only feeds the flame. Of course the nearest engines are sent for in haste, and " arrive at full speed," and are " energetically worked," and all that, as is recorded in the local newspaper ; but it takes an hour to get men and horses over the double distance to be covered in warning and bringing the engines, and meanwhile the effort is to save property, during which every door, especially the front door, is kept wide open, and the fire is fed by a draught, drawn in by the heat, as fierce as the draught to a furnace. By the time the engines arrive—and the time they take seems to the watchers incon- ceivable—their attendants, if they have any experience, see that "the fire has got full hold," and even if they can obtain water, and volunteers, and decent order—which last is sometimes unat- tainable—they work under a sense that the serious mischief is all done, and that the fire must burn itself out. No other building is in danger, and the furious energy always inspired by the idea that a street may be consumed, or a city endangered, is naturally wanting. Everything is removed that can be removed,—pic- tures first of all, because, in proportion to their value, they are easy to carry, and also, we fancy, because pictures habitually seen wake up a feeling of friendliness, as if they were half alive and then, as a rule, the furniture, which of all things in the house could be most easily replaced, and is most certainly de- stroyed by violent removal. if the fire has fully caught, however, the greater portion of the house is sure to be burnt, and we rarely read an account of such a catastrophe without its ending with the words, 'The fire had gained such a height, that only the walls are left standing,"—and we may add, exceedingly unsafe.

A great country-house is terribly liable to fire, and, we fear, must always remain so. The desiccation of the wood-work, from the constant presence of a warm though equable atmosphere, cannot be prevented. Large supplies of water actually available cannot always be laid on, and when laid on, cannot be directed by inexperienced and frightened persons to the right spot. The extincteurs and vapour-engines and the like, which are announced every now and then, and which may some day supersede fire-engines in large cities, will never be useful to protect country-houses, if only because they demand special appliances, and a degree of knowledge which is sure in the hour of emer-

gency to be absent ; and as for buckets, they are hardly more

useful than squirts. They might be, perhaps, if the uneducated could be convinced that a blanket dipped in a bucket is about five

times as useful to put out a flame as a bucketful of water without the blanket, but experience shows that there are some lessons in physics which it is utterly useless to teach. A girl with

her clothes on fire will run about, and will not wrap the rug

round her ; and a frightened servant will sprinkle water on a flame, instead of rushing at it with a mass of soaked material. We very much question whether any " preparation," short, of course, of a powerful jet of water available in three minutes, is of any serious use, and would recommend owners of country-houses like

buncombe, irreplaceable under £150,000, to spend one per cent. on the interest of that money in severe, constant, and trustworthy patrol, sufficient to replace the unconscious, but endless, watching which preserves small houses. They are not saved by vapour-engines, but by the fact that somebody is always there to see that the fire does not "spit," and that the moderators do not tumble, and that the lucifer-matches are not thrown about at everybody's discretion, more especially on the basement floor. Fire goes up, not down, a fact that needs to be driven over and over again into all uneducated heads, more especially in places where nothing visible suggests danger. Stables are not the places where fire breaks out, because even stable-boys are aware that hay will burn. It is in watchfulness, not in elaborate precaution, that safety must be sought, in a steady rule of care rather than in courage when the emergency has occurred, though there is one precaution which should never be omitted. Neither architects nor housefitters can be trusted about hot-water pipes and flues. They will stow them away where " they will not look ugly," and consequently as often as not behind wood-work, which they make as inflammable as tinder. For the rest, the only permanently useful precaution is watchfulness, which can defeat even the danger attendant upon hot-water pipes. One of the places that ought to burn and never does burn is a Union workhouse, the reason being that it is always full.