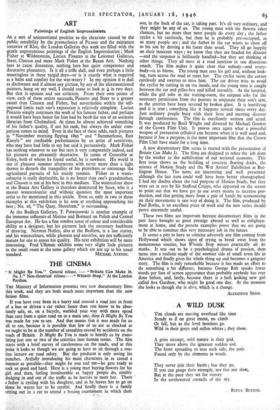 "ft might Be You." General release. — "Britain Can Make It. No. 1. ' Non-theatrical release.—" Whistle Stop." At the London • Pavilion. - - THE Ministry of Information -presents two new documentary films this week, and they are both much more important than the new fiction films.

If you have ever been in a hurry and crossed a road just in front of a bus or driven a car rather faster than you know to be abso- lutely safe, or, on a bicycle, warbled your way with more speed than care from a quiet road on to a main one, then It Might Be You was made for you to see. And that means that it was made for us all to see, because it is possible that few of us are as shocked as we ought to be at the number of casualties caused by accidents on the roads of Britain. It Might Be You is made to horrify us by trans- lating just one or tWo of the statistics into human terms. The film starts with a brief survey of carelessness on the roads and at this point it looks as though we are going to have to sit through a rou- tine lecture on road safety. But the producer is only saving his punches. Artfully introducing his main characters in as casual a manner as possible—they might be you and me—he gets ready to sock us good and hard. Here is a young man buying flowers for his girl and then, feeling invulnerable- as happy people do, nimbly dodging in and out of the traffic as he hurries to meet her. There a father is cycling with his daughter, and as he.leaves her to go on alone he warns her to be careful. And finally there is a family setting out in a car to attend a boxing tournament in which their JANUARY I 8, 1946 63 son, in the back of the car, is taking part. It's all very ordinary, and they mtght be any of us. The young man with the flowers takes chances, but no more than most people do every day ; the father cycles a bit carelessly, but then he is probably pre-occupied, as so many people are ; and the father in the car wants to show off to his son by driving a bit faster than usual. They all go. happily on their innocent ways ; we know that they are headed for disaster —and the suspense is brilliantly handled—but they are thinking of other things. They all meet at a road junction in one disastrous smash. The film makes it quite clear that nobody—and every- body—is to blame. The young man sees his girl and, without look- ing, runs across the road to meet her. The cyclist turns the corner carelessly and swerves to miss him. The car driver tries to avoid the cyclist by cutting in on the inside, and the young man is caught between the car and pillar-box and killed instathly. At the hospital, while the girl sobs in the waiting-room, the surgeon asks for the necessary permission from the parents to amputate their son's arm, as the arteries have been severed by broken glass. It is horrifying and it is true ; something like it happens several times every day. Just ordinary people busy with their lives and meeting disaster through carelessness. The film is excellently written and acted. It was produced by Basil Wright and directed by Michael Gordon of the Crown Film Unit It proves once again what a powerful weapon of persuasion celluloid can become when it is well used and, because it has a purpose, is the most important film that the Crown Film Unit have made for a long time.

A new documentary film series is started with the presentation of Britain Can Make It. The films are designed to relate the job done by the worker to the stabilisation of our national economy. This first issue shows us the building of concrete floating docks, the science of Motion Study and the War Artists' Exhibition at Bur- lington House. The items are interesting and well presented, although the last item could well have been better photographed. I had my doubts about the real purpose of Motion Study, but they were set at rest by Sir Stafford Cripps, who appeared on the screen to point out that we have got to use every means to increase pro, duction, and that getting more from a pair of hands by economising on their movements is one way of doing it. The film, produced by Paul Rotha, is an excellent piece of work and the new series should prove extremely useful.

These two films are important because documentary films in the past have brought us great prestige abroad as well as enlighten- ment at home, and the present examples prove that we are going to be able to continue this very necessary job in the future.

It seems a pity to have to criticise adversely any film coming front Hollywood which shows signs of trying to break away from the monotonous routine, but Whistle Stop misses practically all' its marks. It sets out to be a psychological drama of passion, then turns into a realistic study of the seamier side of small town life in America and finally gives the whole thing up and becomes a gangster story. The film is only remarkable because it has made an effort to do something a bit different, because George Raft speaks fewer words per foot of screen appearance than probably anybody has ever done before, and, lastly, because there is a lush looking new girl called Ava Gardner, who might be good one day. At the moment she looks as though she is alive, which is a change.