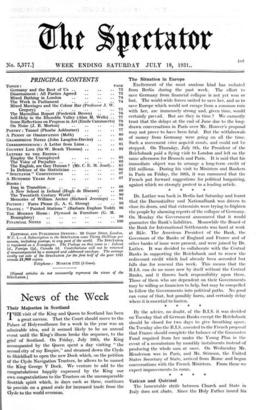 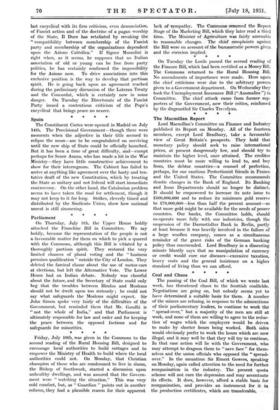 Page 1, 18 July 1931 — Vatican and Quirinal The lamentable strife between Church and State
Close

Vatican and Quirinal The lamentable strife between Church and State

in Italy does not abate. Since the Holy Father issued his last encyclical with its firm criticism, even denunciation, of Fascist action and of the doctrine of a pagan worship of the State, Ii Duce has retaliated by revoking the " compatibility between membership of the Fascist party and membership of the organizations dependent upon the Azione Cattolica." If Signor Mussolini is right when, as it seems, he supposes that no Italian association of old or young can be free from party politics, he has certainly confirmed the impossibility for the Azione now. To drive associations into this exclusive position is the way to develop that partisan spirit. He is going back upon an agreement reached during the preliminary discussion of the Lateran Treaty and the Concordat, which is certainly now in some danger. On Tuesday the Directorate of the Fascist Party issued a contentious criticism of the Pope's encyclical that brings peace no nearer.