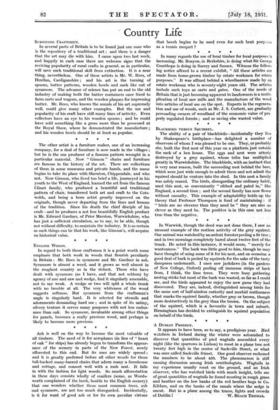 It appears to have been, so to say, a prodigious year. Bird watchers in Ireland during the winter were astonished to discover that quantities of pied wagtails assembled every night (like the sparrows in Lisbon) to roost in a. plane tree not twenty feet high in the centre of Sackville Street, or what was once called Sackville Street. One good observer reckoned the numbers to be about 450. The phenomenon is still causing discussion among Irish ornithologists. Wagtails in my experience usually roost on the ground, and an Irish observer, who has watched birds with much insight, tells me of great quantities of wagtails he found roosting in rough grass and heather on the low banks of the red heather bogs in Co. Kildare, and on the banks of the canals where the sedge is uncut. But in a plane among the trams, lights and crowds