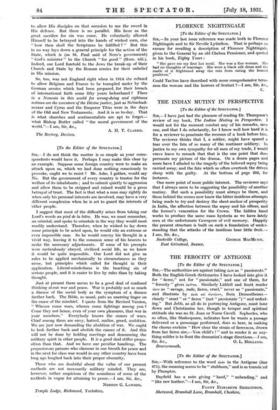 [To the Editor of the SPECTATOR.] SIR,—I do not think

the matter is so simple as your corre- spondents would have it. Perhaps I may make this clear by an example. Suppose some foreign country were to make an attack upon us, which we had done nothing consciously to provoke, ought we to resist ? Mr. Ashe, I gather, would say No. But the government of every country is trustee for the welfare of its inhabitants ; and to submit quietly to aggression and allow them to be stripped and ruined would be a gross betrayal of trust. The fact is that what a man may rightly do when only his personal interests are involved, may have a very different complexion when he is set to guard the interests of `other people.

I suggest that most of the difficulty arises from taking our Lord's words au pied de la lettre. He was, we must remember, an oriental, and spoke to orientals in the way they would most readily understand. Therefore, when he wished to lay down some principle to be acted upon, he would cite an extreme or even impossible case. So he would convey his thought in a vivid way, leaving it to the common sense of his hearers to make the necessary adjustments. If some of his precepts were meticulously :obeyed, civilized social life, as we know it Would be quite impossible. Our Lord did not give us rules to be applied mechanically to circumstances as they arose, but principles which called for thought in their application. Literal-mindedness is the besetting sin of serious people, and it is easier to live by rules than by taking thought.

Just at present there seems to be a good deal of confused thinking about war and peace. War is probably not so much a disease of the social body as the symptom of a disease further back. The Bible, as usual, puts an unerring finger on the cause of the mischief. I quote from the Revised Version, " Whence come wars, whence come fightings among you ? Come they not hence, even of your own pleasures, that war in your members." Everybody knows the causes of wars. Chief among them are envy, hatred, malice, greed, ambition. We are just now demanding the abolition of war. We ought to look further back and abolish the causes of it. And this will not be done by holding meetings and denouncing the military spirit in other people. It is a good deal stiffer propo- sition than that. And we have our peculiar handicap. The preposterous persons who clamour in one breath for peace and in the next for class war would in any other country have been long ago laughed back into their proper obscurity.

Those who are doubtful about the valbe of our present methods are not necessarily military minded. They are, however, rather suspicious of the soundness of some of the methods in vogue for attaining to peace.—I am, Sir, &c., NORTON G. LAWSON.