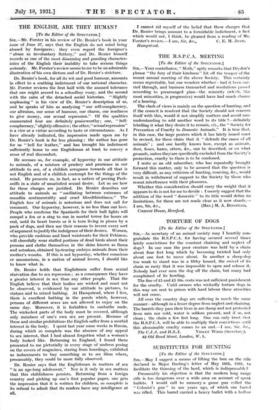 TORTURE OF DOGS [To the Editor of the SPECTATOR.] SIR,—As

secretary of an animal society may I heartily con- gratulate the R.S.P.C.A. for having secured several times lately convictions for the constant chaining and neglect of dogs? In one case the poor creature V/11.9 held by a chain about four feet long which by becoming twisted had only about one foot to move about. In another a sheep-dog too weak to stand was in a filthy kennel, the swivel of its chain so rusty that it was impossible to open and release it. Nobody had ever seen the dog off the chain, but many had complained of its howling.

The fine of £5 and £5 10s. costs was not sufficient punishment for the cruelty. Until owners who wickedly torture dogs in this way are sent to prison with hard labour these atrocities will not cease.

All over the country dogs are suffering in much the same manner—although in a lesser degree from neglect and chaining. The barrels they pass their lives in are damp and not protected from rain nor cold, water is seldom present, and if so, not clean ; the chain a few feet long. One can only trust that the R.S.P.C.A. will be able to multiply their convictions until this abominable cruelty comes to an end.—I am, Sir, &c.,