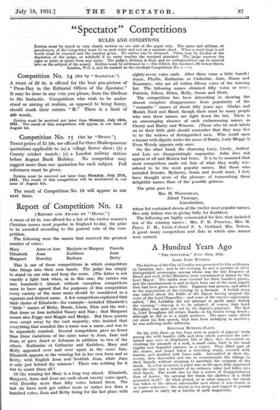 RULES AND CONDITIONS Entries must be typed or very clearly written on one aide of the paper only. The name and address, or pseudonym, of the competitor must be on each entry and not on a separate sheet. When a word limit is set words must be counted and the number given. No entries -can be returned. Prizes may be divided at the discretion of the judge, or withheld if no entry reaches the required standard. The judge reserves the right to print or quote from any entry. The judge's decision is final, and no correspondence can be entered into on the subject of the award. Entries must be addressed to :—The Editor, the Spectator, 99 Gower Street, London, W.C. 1, and be marked on the envelope Competition No. (—).

Competition No. 14 (Set by " SCADAVAY.") A PRIZE of £3 3s. is offered for the best pen-picture of " Press-Day in the Editorial Offices of the Spectator." It may be done in any vein you please, from the libellous to the fantastic. Competitors who wish to be under- stood as aiming at realism, as opposed to being funny, should mark their entries " R." There is a limit of 400 words.

Entries must be received not later than Monday, July 20th, 1931. The result of this competition will appear in our issue of August lat.

Competition No. 15 (Set by "Doom") THREE prizes of £1 10s. are offered for three Shakespearean quotations applicable to (a) a village flower show; (b) a County cricket match ; (c) a London railway station before August Bank Holiday. No competitor may suggest more than one quotation for each subject. Full references must be given.

Entries must be received not later than Monday, July 27th, 1931. The result of this competition will be announced in our issue of August 8th.

The result of Competition No. 13 will appear in our next issue.

Report of Competition No. '2,

( REPORT AND AWARD BY " DUGLI." ) A PRIZE of £3 3s. was offered for a list of the twelve women's Christian names most popular in England to-day, the prize to lie awarded according to the general vote of the com- petition.

This is one of those competitions in which competitors take things into their own hands. The judge has simply to stand on one side and keep the score. (The latter is not exactly a light task when, as in this case, the entries run into hundreds !) Almost without exception competitors seem to have agreed that for purposes of this competition every variety of the same name should be considered as a separate and distinct name. A few competitors explained that their choice of Elizabeth—for example—included Elizabeth's ".little " names of Betty, Bessie, Lizzie, Elsie and the rest ; that Anne or Ann included Nancy and Nan ; that Margaret meant also Peggy and Maggie and Madge. But these purists were swept away by the vast majority, who insisted that everything that sounded like a name was a name, and was to be separately counted. Several competitors gave no fewer than three variations of the same name in Joan, Jane and Jean, or gave Janet or Johanna in addition to two of the others. Katharine or Catharine and Kathleen, Mary and Molly appeared over and over again in the same lists. Elizabeth appears in the winning list in her own form and as Betty, with English Joan and Scottish Jean, while Jane is only just behind the winners There was nothing for it but to count them all !

Of the winning list Mary is a long way ahead. Elizabeth, Margaret, Anne and Joan are each about twenty votes apart, with Dorothy more than fifty votes behind them. The last six have each got rather more or rather less than a hundred votes; Jean and Betty tieing for the last place with eighty-seven votes each. After these come a little bunch Joyce, Phyllis, Katharine or Catherine, Jane, Diana and Rosemary, who are all within fifteen votes of the winning list. The following names obtained fifty votes or over t Patricia, Eileen, Helen, Molly, Susan and Doris.

The competition has been interesting in showing the almost complete disappearance from popularity of the " romantic ". names of about fifty years ago. Gladys and Muriel, Enid and Maud, though there must be many people who own these names, are right down the list. There is an encouraging absence of such embarrassing names as Cherry and Bunty and Winsom. (Those who tie such labels on to their little girls should remember that they may live to be the widows of distinguished men. Who could open a bazaar with dignity under the name of Bunty, Lady Bloggs ?) Even Wendy appears only once.

On the other hand, the charming Lucy, Cicely, Audrey and Lois are disappointingly unpopular. Julia does not appear at all and Monica but twice. It is to be assumed that most competitors made out lists of what they really con- sidered to be the most popular names. But those who included Deirdre, Myfanwy, Sonia and Averil must, I feel, have thought more of the pleasure of transcribing these delightful names than of the possible guineas.

Mrs. M. WHITEHEAD, Alford Vicarage, Lincolnshire, whose list contained eleven. of the twelve most popular names. Her only failure was in giving Sally for Kathleen.

The freedom of the City of London was presented to this nobleman on Saturday last ; and in the evening, he and a number of other distinguished personages, among whom was the late Emperor of Brazil and most of the Ministers, were entertained at dinner by the Lord Mayor. The tables were covered for three hundred guests, and the entertainment is said to have been one of the most superb that had been given since 1815. Paganini was present, and added to the enjoyments of the evening by a fantasia. A foolish story was current about the fiddle of the Signor having stopped the voice of the Lord Chancellor ; and some of the reports sagaciously added, "His Lordship did not attempt to speak again during the evening,"—leaving it to be inferred, of course, that Lord Brougham was quite put out by the Signor's pizzicato. The fact is, Lord Brougham did return thanks on his health' being drunk ; although he did so in a single sentence. The same cause which cut short his first speech, kept him from indulging in another ; he was suffering under influenza.

On the 25th June, as two boys were in search of pigeons' nests among' the wild basaltic cliffs and dens which surround the cele. brated spar cave in Strathaird, Isle of Skye, they discovered on climbing the pinnacle of a rock, a small cairn, built in the most regular and beautiful manner, in a corner. They lifted part of the stones, and found below a travelling trunk, covered with leather, and studded with brass nails. Astonished at their dis- covery, they descended and ran to communicate the tidings to their friends, without stopping to ascertain the contents of the trunk. In a few moments, a party was on the spot, fully impressed with the idea that a treasure of no ordinary value had fallen into their hands. The result was no loss a source of disappointment than of horror. On opening the trunk the skeleton of a child presented itself ! At what period, or in what manner, the trunk was taken to the almost inaccessible spot where it was found, is of course unknown ; the ascent is too steep and rugged to permit any person to carry up a burden of such magnitude.