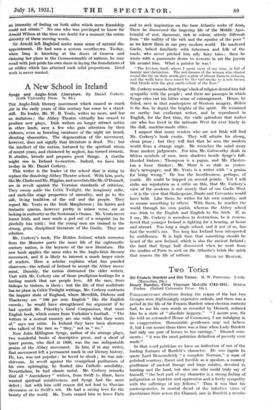 A New School in Ireland

Synge and Anglo-Irish Literature. By Daniel Corkery. (Cork University Press. 7s. 6d.) Tim Anglo-Irish literary movement which caused so much stir in the early years of this century has come to a stand- still. Its leader, Mr. W. B. Yeats, writes no more, and has no imitators ; the Abbey Theatre virtually has ceased to produce new plays. Irish writers no longer attract notice in other lands, save a few who gain attention by their violence, even as brawling creatures of the night are heard, shouting obscenities. The degeneration of the movement, however, does not signify that literature is dead. No ; but the intellect of the nation, tortured by the spiritual strain of recent years, and cloistered by neglect, has turned inwards. It studies, broods and prepares great things. A Goethe might rise in Ireland to-morrow. Indeed, we have him to-day in Mr. Daniel Corkery.

This writer is the leader of the school that is rising to replace the dissolving Abbey Theatre school. With him, poets like Mr. Clarke and Mr. Higgins, and novelists like Mr. O'Donnell, are in revolt against the Yeatsian standards of criticism. They sweep aside the Celtic Twilight, the imaginary sidle,' and suchlike stage properties of unreality, and go to the salt, living tradition of the soil and the people. They regard Mr. Yeats as the Irish Macpherson ; his fairies and fantastic queens, however pretty in minor verse, are as lacking in authority as the Scotsman's Ossian. Mr. Yeats never learnt Irish, and once made a god out of a misprint (as he gleefully has told) ; but the young men are trained in the strong, grim, disciplined literature of the Gaelic. They are scholars.

Mr. Corkery's book, The Hidden Ireland, which recreates from the Munster poets the inner life of the eighteenth- century nation, is the keynote of the new literature. His new book applies the same rules to the Anglo-Irish literary movement, and it is likely to interest a much larger circle of readers. Here a scholar explains what has puzzled observers—the refusal of Ireland to accept the Abbey move- ment. Dumbly, the nation distrusted the elder writers. Visit with Mr. Corkery one of those prodigious hostings for a hurling match that our people love. All the race, from bishops to tinkers, is there ; but the life of that multitude has no place in Celtic Twilight writings. Mr. Corkery contrasts the happier state of England, where Meredith, Dickens and Thackeray are " 100 per cent. English " like the English. crowds ; he would have strengthened his argument if he had quoted Mr. Priestley's Good Companions, that most English book, which comes from Yorkshire's football. " The writers in a normal country are one with what they write of," says our critic. In Ireland they have been showmen who talked of the race as " they," not as " we."

Now John Millington Synge, author of six strange plays, two wonderful books of descriptive prose, and. a sheaf of. queer poems, who died in 1909, was the one indisputable genius of the Abbey movement, In him, if in any writer, that movement left .a permanent mark in our literary history. He, too, was not popular ; he loved to shock ; he was mis- chievous.. In revolt against the evangelical puritanism of his own upbringing, he flouted also Catholic sensibility. Nevertheless, he had classic metal. Mr. Corkery remarks that all " Ascendancy " writers, from Swift to Shaw, have wanted spiritual sensitiveness, and Synge had the same defect ; but with him cold reason did not lead to Shavian cleverness or to Swift's wit. He had a saving love for the beauty of the world. Mr. Yeats caused him to leave Paris

and to seek inspiration on the bare Atlantic rocks of Aran, There he discovered the lingering life of the Middle Ages.

brimful of zest, daemonic, rich in colour, utterly different from " the nullity of the rich and the squalor of the poor " as we know them in our grey modern world. He mastered

Gaelic, talked familiarly with fishermen and folk of the roads, who never pitched him silly fairy tales ; then he wrote with a passionate desire to recreate in art the joyous life around him. What a painter he was

" The kitchen itself, where I spent most of my time, is full of beauty and distinction. The red dresses of the women who cluster round the fire on their stools give a glow of almost Eastern richness, and the walls have been toned by the turf-smoke to a soft brown that blends with the grey earth-colour of the floor."

Mr. Corkery remarks that Synge's lack of religion deniedhim full sympathy with the people ; and there are passages in which Synge cries out his bitter sense of estrangement. Hence, he failed, save in that masterpiece of Western imagery, Riders to the Sea, to depict the heights of the spirit. He remained an earthy but exuberant writer, and he reproduced in English, for the first time, the virile splendour that makes one who has lived in the intimate West for ever lonely in the dull, machine-made cities.

I suspect that many readers who are not Irish will find Mr. Corkery's book exotic. They will admire his strong, clean prose ; but they will find that he sees the modern world from a strange angle. He wrenches the mind away from modern judgments. For him, Mr. Galsworthy deals in lifeless symbols of men, mere shadows beside Synge's full- blooded tinkers ; Thompson is a pagan, and Mr. Chester- ton a loose thinker ; Mr. Shaw is as stale as yester- day's newspaper, and Mr. Yeats is a writer with " a genius for being wrong." lie has the heartlessness, perhaps, of youth. He could be tripped on several points. Yet I will stake my reputation as a critic on this, that Mr. Corkery's view of the moderns is not merely that of our Gaelic West —it is the view that Shakespeare, Dante and Cervantes would have held. Like them, he writes for his own country, and so means something to others. With them, he reaches the world through his own parish, whereas the Abbey school was Irish to the English and English to the Irish. If, as I say, Mr. Corkery is merciless in destruction, be it remem- bered that younger Ireland is fighting for a hearing, at home and abroad. Too long a single school, and it not of us, has had the world's ear. Too long has Ireland been interpreted by middlemen. It is high time that something should be heard of the new Ireland, which is also the ancient Ireland ; the land that Synge half discovered when he went from the studios of Paris to seek on the Atlantic's brink the spirit