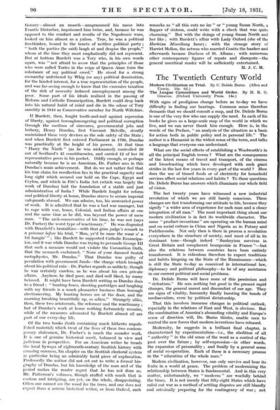 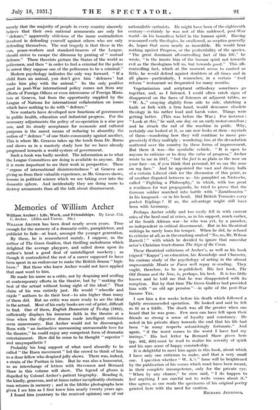 With signs of prodigious change before us to-day we have difficulty in finding our bearings. Common sense therefore demands that we should consult a map, and Dr. Delisle Burns is one of the very few who can supply the need. In each of his books he gives us a large-scale map of the world in which we live, and we can never thank him enough. Here is, in the words of the Preface, " an analysis of the situation as a basis for action both in public policy and in personal life." The author is a Humanist in the widest sense of the term, and talks a language that everyone can understand.

What are the social effects of establishing a Woolworth's in all the principal English towns ? What are the consequences of the latest means of travel and transport, of the cinema and broadcasting which have developed with such giant strides in the last few years in every part of the world ? How does the use of tinned foods or of electricity for household services affect social relations and habits ? To these questions Dr. Delisle Burns has answers which illuminate our whole field of vision.

The last twenty years have witnessed a new industrial revolution of which we are still barely conscious. These changes are fast transforming our attitude to life, because they signify " a wider area of experience for each man and a closer integration of all men." The most important thing about our modern civilization is in fact its worldwide character. The same " product-inventions " are operating on the human mind and on social culture in China and Nigeria as in Putney and Puddlecombe. Not only then is there in process a revolution everywhere in the structure of society, and most of all in its dominant tone—though indeed " flunkeyism survives in Great Britain and complacent bourgeoisie in France "—but also the relations between countries have been entirely transformed. It is ridiculous therefore to expect traditions and habits hingeing on the State of the Renaissance—which is still the State to-day as conceived in international law, diplomacy and political philosophy—to be of any assistance in our current political and social problems.

Dr. Delisle Burns will have none of this pessimism and " defeatism." He sees nothing but good in the present rapid changes, the general unrest and discomfort of our age. They are signs of vitality, humanity finally bursting the bonds of inediaevalism, even' by political dictatorship.

That this involves immense changes in political outlook, especially in the relations of East and West, is obvious. But the combination of America's abounding vitality and Europe's sense of direction will, Dr. Burns thinks, enable men to control the new forces that modern inventions have released.

Modernity, he, suggests in a brilliant final chapter, is characterized by experimentalism—i.e., the abolition of all, " authority " in the old sense of the word as a control of the past over the future ; by self-expression—in other words, the expansion of personality ; and finally by a general sense of social co-operation. Each of these is a necessary process in the " education of the whole man."

Modern civilization, however, can only survive and bear its fruits in a world at peace. The problem of modernizing the relationship between States is fundamental. And in this very matter, unfortunately, we " moderns " are woefully behind . the times. It is not merely that fifty-eight States which have ruled out war as a method of settling disputes are still blandly and criminally preparing for the contingency of war ; not merely that the majority of people in every country sincerely believe that their own national armaments are only for defence," apparently oblivious of the inane contradiction involved in defending yourself against others who are only defending themselves. The real tragedy is that those in the van, peace-workers and standard-bearers of the League, should strive to escape the dilemma by prating of " mutual defence." These theorists picture the States of the world as policemen, and then " in order to fmd a criminal for the police to arrest they suppose one of the policemen to be a criminal."

Modern psychology indicates the only way forward. " If a child fears an animal, you don't give him ' defences ' but make him play with the animal." So the only positive good in post-War international policy comes not from any efforts of Foreign Offices or even intercourse of Foreign Minis- ters at Geneva, but from the opportunity supplied by the League of Nations for international collaboration on issues which have nothing to do with " defence."

New contacts have developed new functions of government in public health, education and industrial progress. For the necessary adjustments the policy of co-operation is a sine qua non, and its steady acceptance for economic and cultural purposes is the surest means of reducing to absurdity the notion of " defence " of one State-community against another. This is where Mr. Greaves takes up the torch from Dr. Burns and shows us in a masterly study how far we have already progressed towards a world-system of government.

Such a book was badly needed. The information as to what the League Committees are doing is available to anyone. But it is more important to see their work in perspective. These " organs of international disinterestedness " at Geneva are giving us from their valuable experience, as Mr. Greaves shows, lessons in political science which we are taking over into the domestic sphere. And incidentally they are doing more to destroy armaments than all the talk about disarmament.