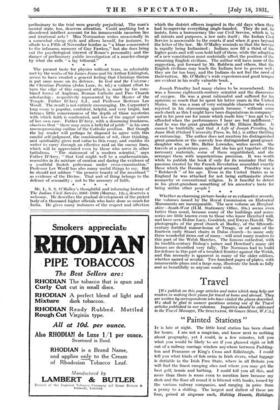 Page 28, 18 July 1931 — The present taste for physics without tears, so admirably met
Close

The present taste for physics without tears, so admirably met

by the works of Sir James Jeans and Sir Arthur Eddington, seems to have created a general feeling that Christian theism is put once more on its defence. In God and the Universe : the Christian Position (John Lane, 3s. 6d.) a valiant effort to turn the edge of this supposed attack is made by the com- bined forces of Anglican, Roman Catholic and Free Church scholarship ; respectively represented by the Master of the Temple, Father D'Arcy S.J., and Professor Bertram Lee Woolf. The result is not entirely encouraging. Dr. Carpenter's long essay is popular, confident, helpful, and very bright, but betrays little consciousness of the depth of those mysteries with which faith is confronted, and less of the august nature of her own case. Father D'Arcy, with a disarming frankness, observes that " there may seem a bellyful of pride " in his own uncompromising outline of the Catholic position. But though the lay reader will perhaps be disposed to agree with this candid self-judgment, .the combination of wit, clear thinking, and spirituality gives real value to this essay, and enables its writer to carry through an effective raid on the enemy lines, which will be appreciated even by those who serve in other battalions. " The statement of a modem scientist," says Father D'Arcy, " that God might well be a mathematician, resembles in its mixture of caution and daring the evidence of a youthful Scotch policeman under cross-examination." Professor Lee Woolf has also many useful things to say. But he should not adduce " the pensive beauty of the moorland" as evidence of the Divine. That sort of thing belongs to the defence of sensuality ; not to the armoury of faith.