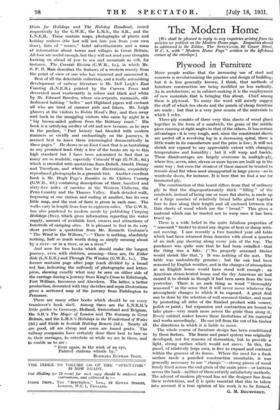 [We shall be pleased to reply to any enquiries arising from the articles we publish on the Modern Home page. Enquiries should be addressed to the Editor, The SPECTATOR, 99 Gower Street, W.C. 1, with "Modern Home Page" written in the left-hand corner of the envelope.]

MOST people realize that the increasing use of steel and concrete is revolutionizing the practice and design of building; but it is less generally known, I think, that methods of furniture construction are being modified no less radically. As in architecture, so in cabinet-making it is the employment of new materials that is bringing this about. Chief among these is plywood. To many the word will merely suggest the stuff of which tea chests and the panels of cheap furniture are made ; but that is a very poor cousin of the materials to which I refer.

Three-ply consists of three very thin sheets of wood glued together in the form of a sandwich, the grain of the middle piece running at right angles to that of the others. It has certain advantages : it is very tough, and, since the constituent sheets are peeled off a revolving log in a decreasing spiral, there is little waste in its manufacture and the price is low ; it will not shrink nor expand to any appreciable extent with changing temperatures and humidity ; but it will warp and buckle. These disadvantages are largely overcome in multiple-ply, where five, seven, nine, eleven or more layers are built up in the same way ; but even the stoutest of these cannot be trusted to remain dead flat when used unsupported in large pieces—as in wardrobe doors, for instance. It is here that we find a use for laminated ply.

The construction of this board differs from that of ordinary ply in that the disproportionately thick " filling " of the sandwich, instead of being one or more flat sheets, is made up of a large number of relatively broad laths glued together face to face along their length and all enclosed between the thin sheets of wood which are the " bread." This gives a material which can be trusted not to warp once it has been trued up.

There is a wide belief in the quite fabulous properties of " seasoned " timber to stand any degree of heat or damp with- out moving. I saw recently " a two" hundred year old table which had been returned from America with about a quarter of an inch gap showing along every join of the top. The purchaser was quite sure that he had been swindled—that the thing was a fake. (" No properly seasoned timber would shrink like that.") It was nothing of the sort. The table was undoubtedly genuine ; but the oak had been seasoned by English weather, and in the changes of atmosphere in an English house would have stood well enough ; an American steam-heated house and the dry American air had caused it to shrink as though it had been sawn from the tree yesterday. There is no such thing as wood " thoroughly seasoned " in the sense that it will never move whatever the atmospheric changes to which it be exposed. A great deal can be done by the selection of well seasoned timber, and more by protecting all sides of the finished product with veneer, polish or paint ; but expansion and contraction are bound to take place—very much more across the grain than along it. Every cabinet maker knows these limitations of his material and works accordingly. He can tell from the cut of his timber the directions in which it is liable to move.

The whole course of furniture design has been conditioned by these factors. The frame and panel system was originally developed, not for reasons of decoration, but to provide a light, strong surface which would not move. In this, the panel, of relatively large area, is free to expand and contract within the grooves of its frame. Where the need for a flush surface made a panelled construction unsuitable, it was generally necessary to use " clamps "—strong pieces of wood firmly fixed across the end grain of the main piece—or battens across the back—neither of them entirely satisfactory methods. The advent of modern plywood has set the designer free from these restrictions, and it is quite essential that this be taken into account if a true opinion of his work is to be formed.