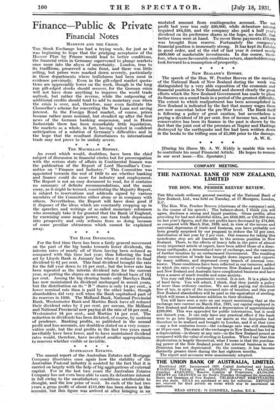 For the first time there has been a fairly general movement on the part of the big banks towards lower dividends, the interim rates of nearly all of them having been reduced as compared with this time _last year, thus following the lead set by Lloyds Bank in January last when it reduced its final dividend to 61 per pent. This final dividend brought the rate for the full year down to 15 per cent.; but the lower rate has been repeated as the 'interim dividend rate for the current year, so putting the shares on an annual dividend basis of 181 per cent. Among the big clearing banks only Barclays Bank has now maintained its dividend unchanged in recent years, but the distribution on its " B " shares is only 14 per cent., a lower nominal rate than is paid by the other banks; though shareholders did very well when the Bank capitalised part of its reserves in 1920. The Midland Bank, National Provincial Bank, Westminster Bank and Martins Bank have all reduced their dividend rates by 2 per cent. per annum, the Midland and Niitional Provincial now paying at the rate of 16 per cent., Westminster 18 per cent., and Martins 14 per cent. The reduction in dividends has Leen dictated, of course, by motives of prudence. Banking profits, , as published in the annual profit and loss accounts, are doubtless stated on a veryconser- waive scale, but the real profits in the last two years must inevitably have been lower, and to have maintained dividend rates would, therefore, have involved smaller appropriations tn reserves whether visible or invisible.