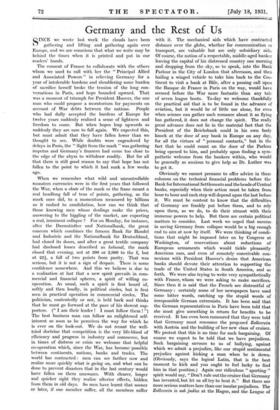 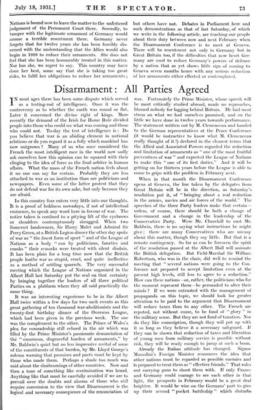 Germany and the Rest of Us

SINCE we wrote last week the clouds have been gathering and lifting and gathering again over Europe, and we are conscious that what we write may be behind the times when it is printed and put in our readers' hands.

The consent of France to collaborate with the others whom we used to call with her the " Principal Allied and Associated Powers " in relieving Germany for a year of intolerable burdens and shouldering some burden of sacrifice herself broke the tension of the long con- versations in Paris, and hope bounded upward. That was a moment of triumph for President Hoover, the one man who could propose a moratorium for payments on account of War debts between the nations. People who had dully accepted the burdens of Europe for twelve years suddenly realized a sense of lightness and freedom to come. But when hopes leap upwards so suddenly they are sure to fall again. We expected this, but must admit that they have fallen lower than we thought to see. While doubts were engendered by delays in Paris, the " flight from the mark " was gathering impetus and Germany's finances had come too close to the edge of the abyss to withdraw readily. But for all that there is still good reason to say that hope has not fallen to the point to which it had sunk a few weeks ago.

When we remember what wild and uncontrollable monsters currencies were in the first years that followed the War, when a chute of the mark or the franc meant a real headlong fall of tens of points, gathering, as the mark once did, to a momentum measured by billions as it rushed to annihilation, how can we think that those knowing men whose dealings make the prices, answering to the higgling of the market, are expecting a real, imminent collapse ? For on Monday, for instance, after the Darmstadter und Nationalbank, the great concern which combines the famous Bank fur Handel und Industrie and the Nationalbank fur Deutschland, had closed its doors, and after a great textile company had disclosed losses described as kolossal, the mark closed that evening, not at 200 or 2,000 to the £, but at 22k, a fall of two points from parity. That was serious, but it is not a sign of despair. There is some confidence somewhere. And this we believe is due to a realization at last that a new spirit prevails in com- mercial and financial spheres, a spirit of willing co- operation. As usual, such a spirit is first heard of, softly and then loudly, in political circles, but is first seen in practical operation in commercial circles. The politician, contentedly or not, is held back and thinks that he must go forward at the pace of his slowest sup- porters. (" I am their leader ! I must follow them ! ") The best business man can follow an enlightened self- interest so soon as he perceives the way for which he is ever on the look-out. We do not recant the well- tried doctrine that competition is the very life-blood of efficiency and progress in industry and commerce, but in times of distress or crisis we welcome that helpful co-operation which, since the War, has become *possible between continents, nations, banks and trades. The world has contracted : men can see farther now and realize more quickly what is going on, and what can be done to prevent disasters that in the last century would have fallen on them unawares. With clearer, longer and quicker sight they realize ulterior effects, hidden from them in old days. So men have learnt that sooner or later, if one member suffer, all the members suffer with it. The mechanical aids which have contracted distance over the globe, whether for communication or transport, are valuable but are only subsidiary aids. Of course, the notion of a respectable, middle-aged banker leaving the capital of his distressed country one morning and dropping from the sky, so to speak, into the Bank Parlour in the City of London that afternoon, and then hailing a winged vehicle to take him back to the Con- tinent to visit a bank at Brae, after a passing call upon the Banque de France in Paris on the way, would have seemed before the War more fantastic than any tale of seven league boots. To-day we welcome thankfully the practical aid that is to be found in the advance of aviation, but it would be of little use alone, for even when science can gather such romance about it as flying has gathered, it does not change the spirit. The really great advance does not lie in the material fact that the President of the Reichsbank could in his own body knock at the door of any bank in Europe on any day, for all the virtues of " personal contacts," but in the fact that he could count on the door of the Parlour being opened to him, and probably upon finding a sym- pathetic welcome from the bankers within, who would be generally as anxious to give help as Dr. Luther was to get it.

Obviously we cannot presume to offer advice in these columns on the technical financial problems before the Bank for International Settlements and the heads of Central banks, especially when their action must be taken from hour to hour and each step will depend upon the last before it. We must be content to know that the difficulties of Germany are frankly put before them, and to rely upon them, as we do, to do their utmost with their immense powers to help. But there are certain political matters to consider. Last week we urged that success in saving Germany from collapse would be a big enough end to aim at now by itself. We were thinking of condi- tions that might be imposed later on by Congress at Washington, of reservations about reductions of European armaments which would tickle pleasantly American ears, and even of remotely conceivable con- nexions with President Hoover's desire that American banks should devote their attention to supporting the trade of the United States in South America, and so forth. We were also trying to write very sympathetically with France, whom we were asking to make sacrifices. Since then it is said that the French are distrustful of Germany : certainly some of her newspapers have used some bitter words, catching up the stupid words of irresponsible German extremists. It has been said that the German representatives in Paris have been told that she must give something in return for benefits to be received. It has even been rumoured that they were told that Germany must renounce the propased Zoilverein with Austria and the building of her new class of cruiser. We protest that this is no time for such bargaining. Of course we expect to be told that we have prejudices. Such bargaining savours to us of bullying, against which we admit a prejudice, like our stupid sentimental prejudice against kicking a man when he is down: (Obviously, says the logical Latin, that is the best moment to kick and you ought to feel lucky to find him in that position.) Again our ridiculous " sporting " spirit would say, "Don't rule out the cruiser that Germany has invented, but let us all try to beat it." But there are more serious matters here than our insular prejudices. The Zollverein is sub judice at the Hague, and the League of Nations is bound now to leave the matter to the unfettered judgement of the Permanent Court there. Secondly, to tamper with the legitimate armament of Germany would arouse a terrible resentment there. Germany never forgets that for twelve years she has been forcibly dis- armed with the understanding that the Allies would also begin in 1919 to reduce their armaments. She does not feel that she has been honourably treated in this matter. Nor has she, we regret to say. This country may have done her best, some say that she is taking too great risks, to fulfil her obligations to reduce her armaments ; but others have not. Debates in Parliament here and such demonstrations as that of last Saturday, of which we write in the following article, are teaching our people about their duty between now and next February when the Disarmament Conference is to meet at Geneva. There will be resentment not only in Germany but in Great Britain too, if the difficulties that now beset Ger- many are used to reduce Germany's powers of defence by a nation that as yet shows little sign of coming to Geneva_ seven months hence with any serious reduction of her armaments either effected or contemplated.