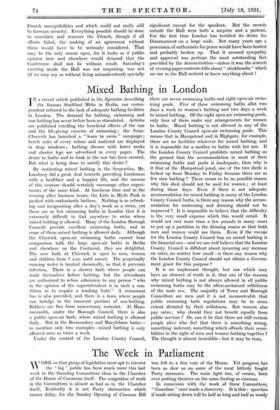 IN a recent article published in the Spectator describing the famous Stadtbad Mitte in Berlin, our corres- pondent referred to the lack of adequate bathing facilities in London. The demand for bathing, swimming and sun bathing has never before been so stimulated. Articles are published extolling the beneficial effects of the sun and the life-giving exercise of swimming ; the News- Chronirle has launched a " learn to swim " campaign ; beach suits of every colour and material are displayed in shop windows ; bathing dresses with lower necks and shorter legs are advertised in every paper. The desire to bathe and to bask in the sun has been created. But • what is being done to satisfy this desire ?

By instituting mixed bathing in the Serpentine, Mr. Lansbury did a great deal towards providing Londoners with a healthier and a happier life, and the success of this venture should certainly encourage other experi- ments of the same kind. At luncheon time and in the evening after business hours, the Lido in Hyde Park is packed with enthusiastic bathers. Nothing is so refresh- ing and invigorating after a day's work as a swim, yet there are so few swimming baths in London that it is extremely difficult to find anywhere to swim where mixed bathing is allowed. Many of the London Borough Councils provide excellent swimming baths, and in some of them mixed bathing is allowed daily. Although the Chiswick open-air swimming baths cannot bear comparison with the large open-air baths in Berlin and elsewhere on the Continent, they are delightful. The new bath at Chiswick is open to men, women and children from 7 a.m. until sunset. The perpetually running water is treated chemically, so that it prevents infection. There is a shower bath where people can wash themselves before bathing, but the attendants are authorized to refuse admission to any person " who in the opinion of the superintendent is in such a con- dition as to require a washing bath." A restaurant bar is also provided, and there is a lawn where people can indulge in the innocent pastime of sun-bathing. Bathers are free from unnecessary restraint. At Ham- mersmith, under the Borough Council, there is also a public open-air bath, where mixed bathing is allowed daily. But in the Bermondsey and Marylebone baths— to mention only two examples—mixed bathing is only allowed once or twice a week.

It is an unpleasant thought, but one which may have an element of truth in it, that one of the reasons why mixed bathing is not always allowed in all public swimming baths may be the often-acclaimed selfishness of the male sex. The majority of Town and Borough Councillors are men and it is not inconceivable that public swimming bath regulations may be to some extent dictated by their selfishness. But women also pay rates ; why should they not benefit equally from public services ? Or, can it be that there are still certain people alive who feel that there is something wrong, something indecent, something which offends their sensi- bilities in the sight of men and women bathing together '? The thought is almost incredible—but it may be true.