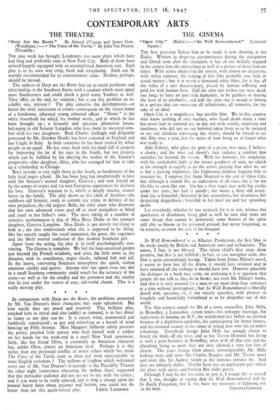 Square.) THE first post-war Italian film to be made is now showing at the Rialto. Written in desperate circumstances during the occupation and filmed soon after the liberation, it has all too skilfully trapped in the camera lens the atmosphere as well as a picture of those hideous times. With actors taken from the streets, with almost no electricity, with stolen cameras, the making of this film probably cost little in actual money ; but it is worth a thousand other films, for it has all the value of a rare documentary, priced by human suffering and paid for with human lives. Half the time one wishes one were dead, one longs to have no part with humanity, to be guiltless of sharing the least of its attributes ; and half the time one is proud to belong to a species that can overcome all tribulations, all torments, for the sake of an ideal.

Open City is a magnificent but terrible film. We in this country who know nothing of total warfare, who faced death many a time but never had to contend day in day out with cruelty, suspicion and insolence, who did not see our beloved taken from us to be tortured or see our children scavenging the streets, should be forced to see this film once a year, lest the mists of time bring us to forget what war really is.

Aldo Fabrizi, who plays the part of a priest, was once, I believe, a clown ; and his wise sad clown's face radiates a comfctrt that stretches far beyond the screen. With his humour, his simplicity, with his unshakable faith in the innate goodnes's of man, we clutch at his strength as eagerly as do the actors, praying that what we see is but a ,passing nightmare, like frightened children begging him to reassure us. I suppose that Anna Magnani is the star of Open City, but although it sounds like an indictment of all stars, she is far too life-like to seem like one. She has a thin tragic face with big circles under her eyes ; her hair is untidy ; she wears a dirty old jersey. And she is beautiful ; beautiful in her naturalness, her weariness, her despairing doggedness ; beautiful in her brief joy and her sprawling death.

Let everybody, whether he has stomach for it or not, witness this apotheosis of desolation, being glad as well he may that there are some things that cannot be destroyed, some flowers of the spirit still able to bloom in the poisoned ground, but never forgetting, as he rejoices, to count the cost of the bouquet. * *

So Well Remembered is an Alliance Production, the first film to be made jointly by British and American stars and technicians. The union, I fear, is not blessed. The infant child's first steps show promise, but this is not fulfilled ; in fact, to cast metaphor aside, this film is quite astonishingly boring. Taken from James Hilton's novel, it seems to have lost all the drama it should have retained and to have retained all the verbiage it should have lost. However plausible the dialogue in a book may seem, on analysing it it is apparent that people do not talk as they do in books, not even Mr. Hilton's books, and that it is very unusual for a man to say more than four sentences at a time without interruption ; but So Well Remembered is liberally dosed with speeches, or, if not exactly speeches, with phrases so lengthily and beautifully formulated as to be altogether out of this world.

The film centres round the life of a town councillor, John Mills, in Browdley, a Lancashire cotton town—his unhappy marriage, his aspirations to become an M.P., his withdrawal just before an election because of a diphtheria epidemic, his campaigning for better houses, and his eventual victory in the cause of young love over his ex-wife's schemings. Everybody knows John Mills has enough charm to knock the birds off the trees, and so has Trevor Howard, but living is such a grim business in Browdley, what with all that rain and the plumbing being so poor, they are only allowed a very few feet of charm. The years change them almost unrecognisably, Mr. Mills looking more and more like Charles Ruggles and Mr. Trevor more and more like Sir Aubrey Smith as the minutes tortoise by. And they are infinitely duller. Martha Scott has an unpleasant part which she plays with spirit, and Patricia Roc looks pretty.

Although I may be the last critic to pen it, I would like to record that I, too, thought of saying that So Well Remembered will be So Easily Forgotten, that I, too, have my moments of lightning wit in the bath. VIRGINIA GRAHAM.